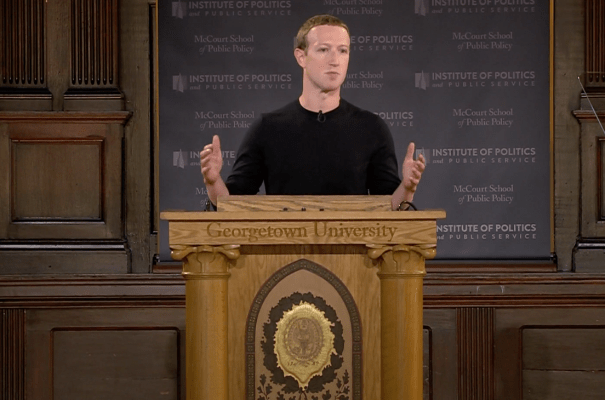 1. Zuckerberg on Chinese censorship: Is that the internet we want?

The Facebook CEO spoke yesterday at Georgetown University, sharing his thoughts on speech and “how we might address the challenges that more voice and the internet introduce, and the major threats to free expression around the world.”

Among his arguments: China is exporting its social values, political ads are an important part of free expression and the definition of dangerous speech must be kept in check.

Sydney-based Code Barrel was founded by two of the first engineers who built Jira at Atlassian, Nick Menere and Andreas Knecht. With this acquisition, they are returning to Atlassian after four years in startup land.

3. Swarm gets green light from FCC for its 150-satellite constellation

Swarm Technologies aims to connect smart devices around the world with a low-bandwidth but ever-present network provided by satellites — and it just got approval from the FCC to do so. Apparently the agency is no longer worried that Swarm’s sandwich-sized satellites are too small to be tracked.

Nintendo’s North American Switch unit sales have already surpassed the lifetime worldwide unit sales of the Wii U. The company announced Thursday that they had sold 15 million units of the popular handheld console in North America.

WarnerMedia has been on a shopping spree for its HBO Max service. It bought the rights to “Friends” and “The Big Bang Theory,” and now it’s using its outsized checkbook to bring beloved Japanese animation group Studio Ghibli’s films onto the web exclusively on its platform for U.S. subscribers.

The vehicle-maker has already been active in putting autonomous technology to work in various industries, with self-driving projects at quarries and mines, and in the busy port located at Gothenburg, Sweden.

7. How Unity built the world’s most popular game engine

Unity’s growth is a case study of Clayton Christensen’s theory of disruptive innovation. While other game engines targeted the big AAA game makers at the top of the console and PC markets, Unity went after independent developers with a less robust product that was better suited to their needs and budget. (Extra Crunch membership required.)