Xiaomi global shipments push past Apple for No. 2 spot – TechCrunch

A banner quarter for Xiaomi helped the Chinese mobile company snag the No. 2 spot in global smartphone shipments, according to newly posted Q2 numbers from research firm Canalys. It’s pretty stunning growth for the company, up 83% year-over-year for the quarter and capturing 17% of the global market.

The surge puts Xiaomi at No. 2, globally, behind only Samsung’s 19% by a relatively small margin. Apple is at third with 14% (after its own solid growth has slowed), while fellow Chinese manufacturers Oppo and Vivo round out the top five at 10% a piece.

Huawei, of course, is nowhere to be seen among the top companies. It’s a pretty massive drop, due in no small part to blacklisting that has both barred the company from certain markets (namely, the U.S.) and cut off access to U.S. mobile products, including Google’s Android and various apps. 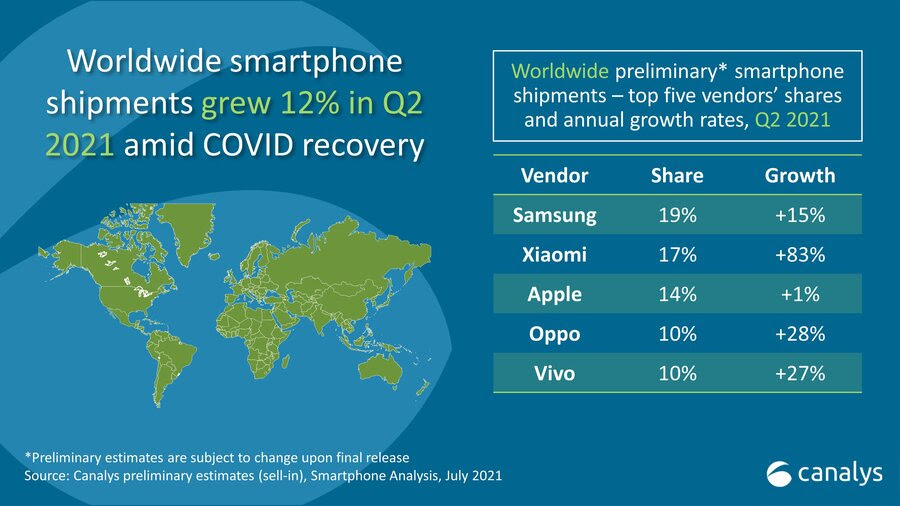 “It is now transforming its business model from challenger to incumbent, with initiatives such as channel partner consolidation and more careful management of older stock in the open market,” the analyst firm’s Research Manager Ben Stanton said in a release. “It is still largely skewed toward the mass market, however, and compared with Samsung and Apple, its average selling price is around 40% and 75% cheaper respectively. So a major priority for Xiaomi this year is to grow sales of its high-end devices, such as the Mi 11 Ultra.”

The company certainly isn’t a household name in the States (the company has dealt with its own issues here), but of late it has found particular success in Latin America, Africa and Western Europe. It seems that there are still plenty of markets available to continue its expansion as it looks to take on Samsung, even as Oppo and Vivo hope to continue their own respective rapid global growth.