With feature updates and new accessories, the RODECaster Pro is a podcaster’s dream come true – TechCrunch 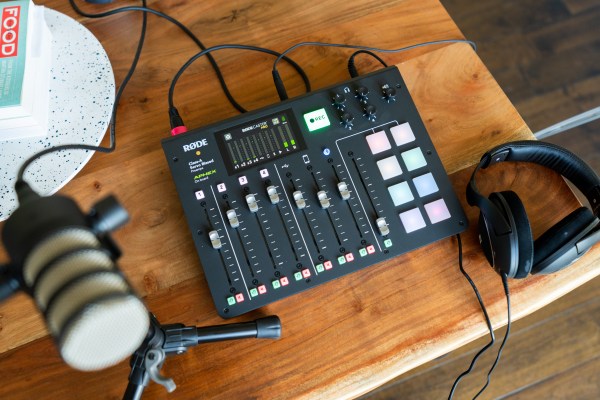 You might have been considering – or have already started – picking up a new hobby this year, particularly one you can do at home. Podcasting seems to be a popular option, and RODE is a company that has done more to cater specifically to this audience than just about any other audio company out there. The RODECaster Pro ($599) all-in-one podcast production studio that they released in 2018 is a fantastic tool for anyone looking to maximize their podcast potential, and with amazing new firmware updates released this year, along with a host of great new accessories, it’s stepped up even further.

The RODECaster Pro is a powerful production studio, but it’s not overwhelming for people who aren’t audio engineers by trade. The deck balances offering plenty of physical controls with keeping them relatively simple, giving you things like volume sliders and large pad-style buttons for top level controls, and then putting more advanced features and tweaks behind layers of menus accessible via the large, high-resolution touchscreen for users who desire more fine-tuned manipulation.

RODECaster Pro includes four XLR inputs, each of which can provide (individually selectable) phantom power for condenser mics, along with four 1/4″ headphone outputs for corresponding monitoring. That’s great because it means if you have guests used to recording podcasts and high-quality audio, they can listen to their own input, or you can opt to just have one producer keeping track of everything. There’s also a left and right 1/4″ audio out for a studio monitor speaker or other output, as well as a USB-C connector for plugging into a computer, and a 3.5mm in for connecting a smartphone or other external audio source. Smartphones can also be connected via Bluetooth, which is very handy for including a call-in guest via wireless. 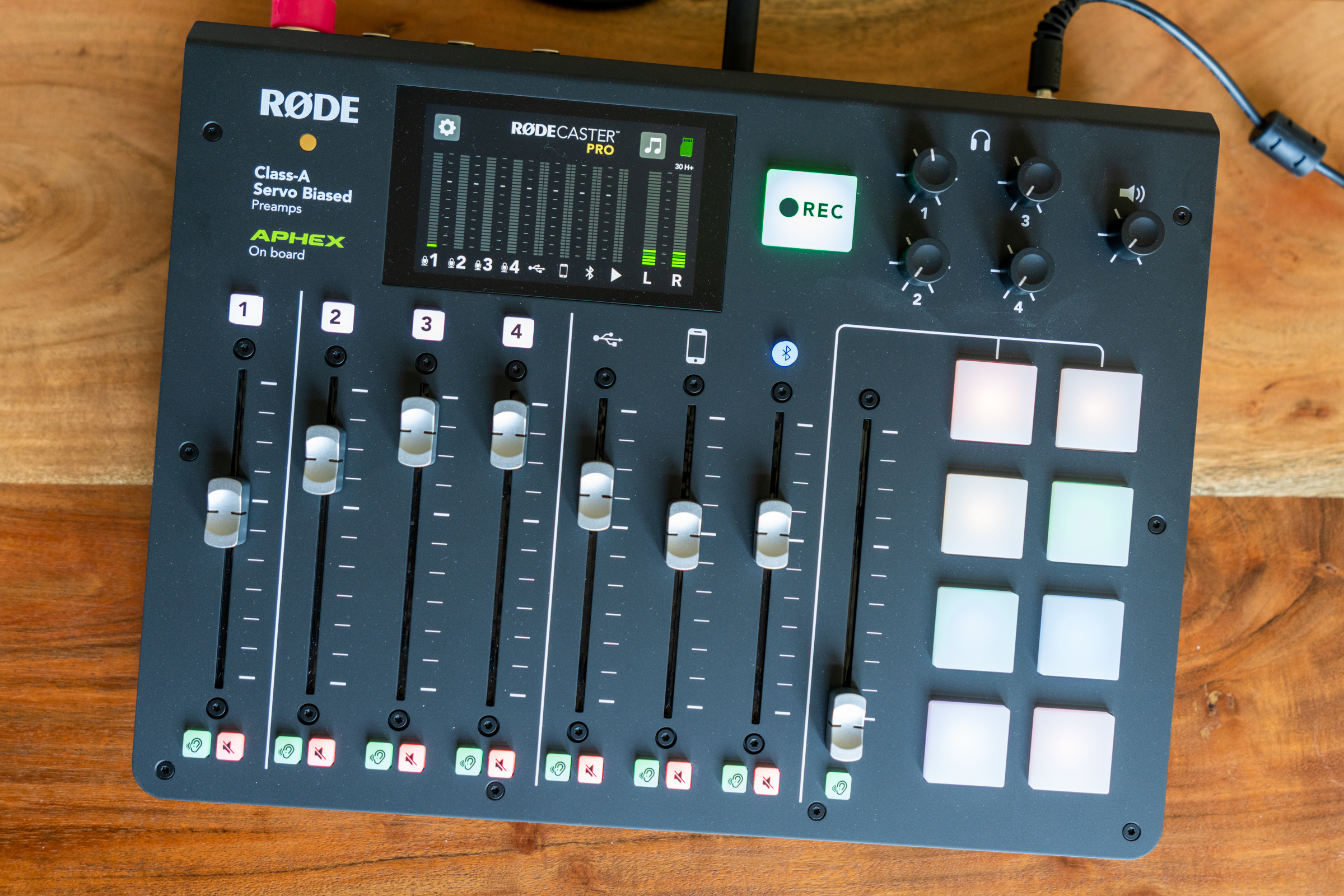 The main surface of the RODECaster Pro includes volume sliders for each available input and pre-set sound effects; volume knobs for each headphone and speaker output; buttons to activate and deactivate inputs; large buttons for playing back pre-set audio files and a large record button. There’s also a touchscreen which gives you access to menus and settings, and which also acts as a visual levels editor while recording.

RODECaster Pro is designed so that you can use it completely independently of any computer or smartphone – it has a microSD slot for recording, and you can then upload those files via either directly connecting the deck through USB, or plugging the card in to a microSD card reader and transferring your files. You can also use multitrack-to-USB or stereo USB output modes on the RODECaster Pro to effectively turn the studio hardware into a USB audio interface for your Mac or PC, letting you record with whatever digital audio production software you’d like, including streaming software.

The RODECaster Pro’s design is a perfect blend of studio-quality hardware controls and simplicity, making the device accessible to amateurs and pros alike. I was up and running with the deck out of the box in just a few minutes, and without making any adjustments at all to the sound profile or settings, I had great-sounding recordings using the RODE PodMic, a $99 microphone that is optimized by RODE to work with the RODECaster Pro out of the box. 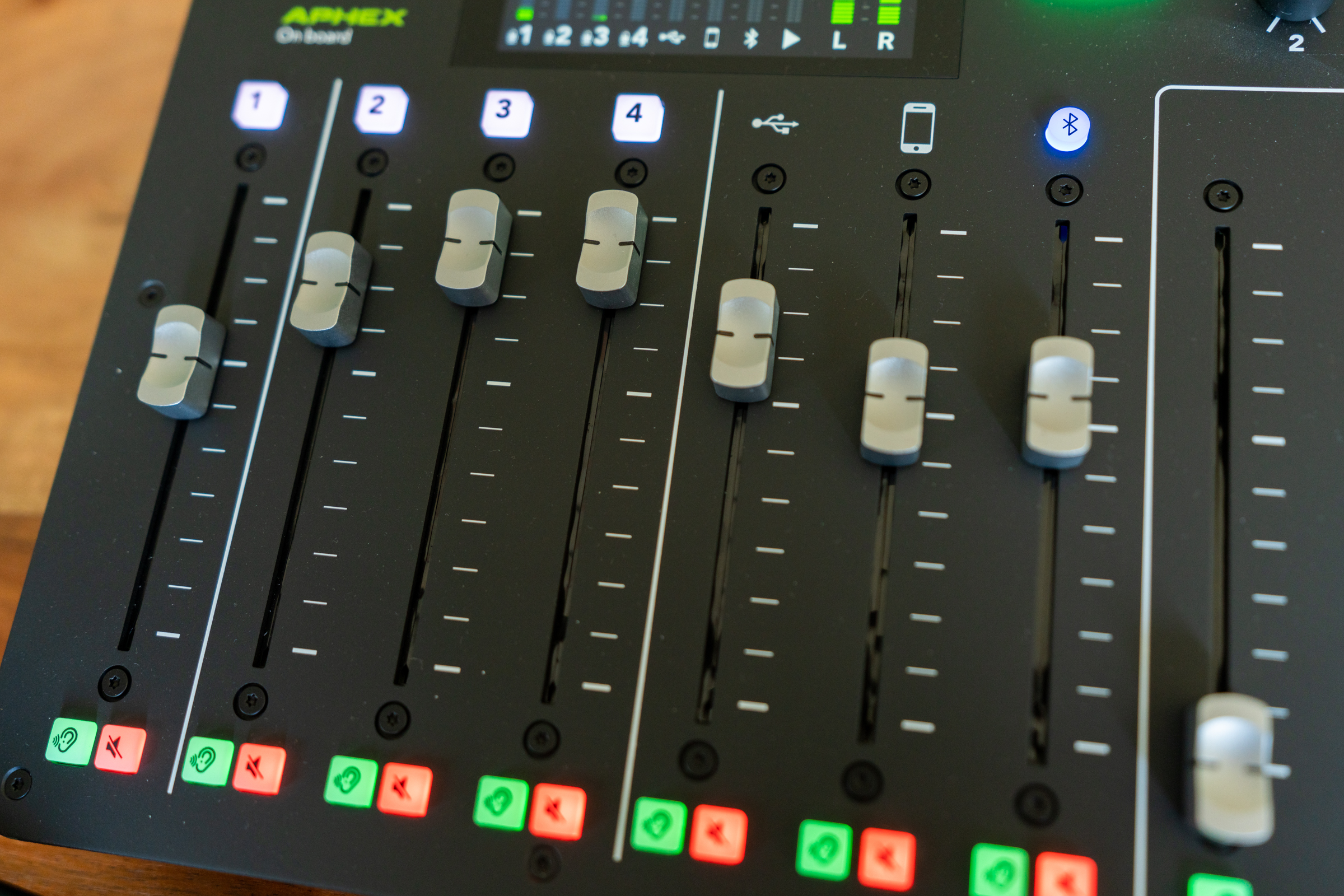 All the controls are easy and intuitive to manage, and you shouldn’t need to read any instruction manuals or guides to get started. The eight button sound effects grid is likely the most complicated part of the entire physical interface, but even the default sounds that RODE includes can be useful, and you can easily set your own via the RODECaster companion app for Mac and PC, and in the box you’ll find guides that you can use to overlay the buttons and label them to keep track of which is which.

The sliders are smooth and great to use, making it easy to do even, manual fade-ins and fade-outs for intro and outro or pre-recorded soundbites. Backlit keys for active/inactive inputs, mute status and the large record button mean you can tell with a quick glance what is and isn’t currently active on the track.

RODE has smartly included a locking power adapter in the box, so that you won’t find the cord accidentally yanked out in the middle of a recording. Each of the XLR inputs also includes a quick release latch for secure connections. And while the RODECaster Pro definitely takes up a lot of space with roughly the footprint of a 13-inch MacBook Pro, it’s light enough to be perfectly portable in a backpack for on-location recordings. 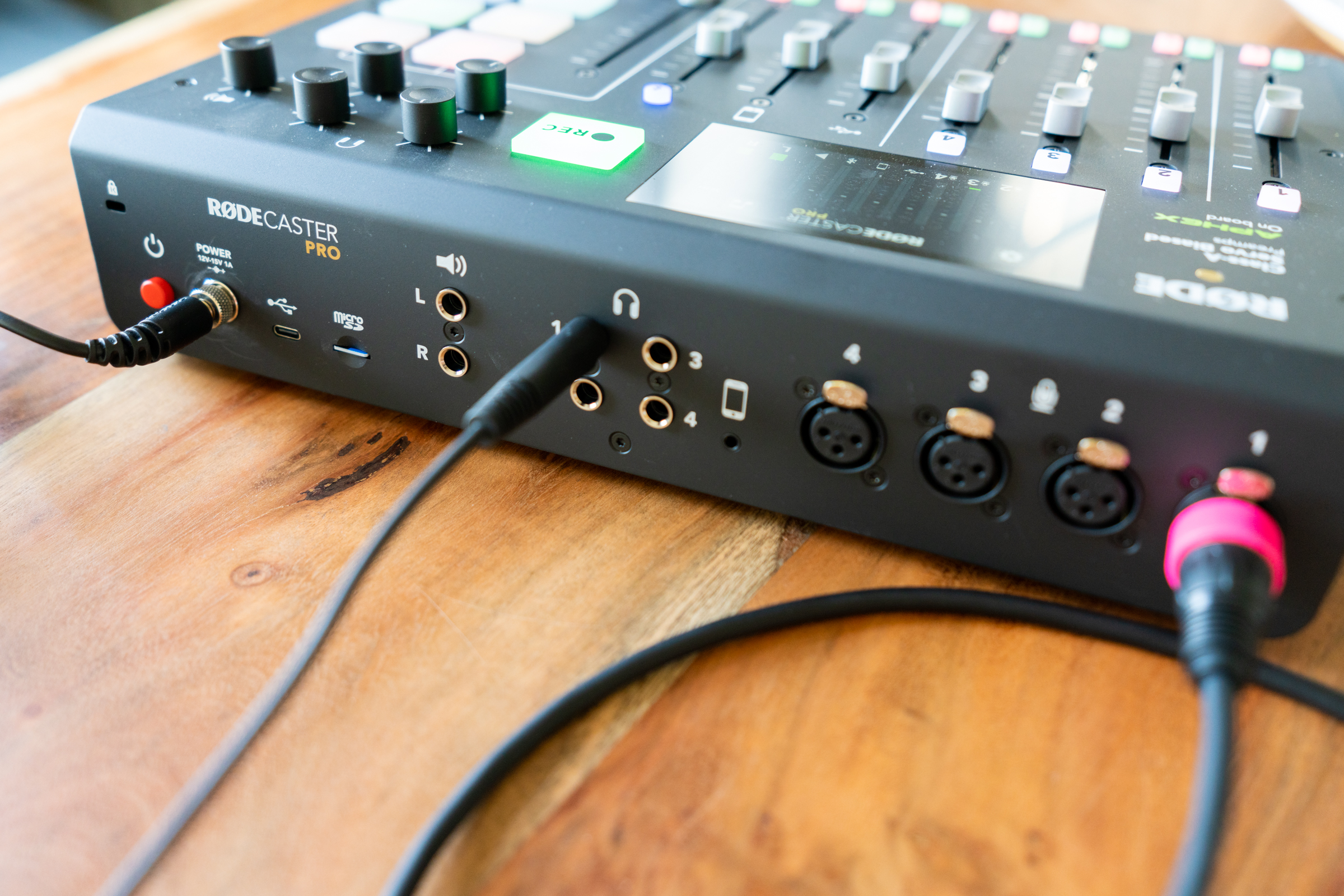 The touchscreen display is another design highlight, since it’s high-resolution, with a matte cover that makes it viewable in a wide range of light, and very responsive touch input, It’s a great way to extend the functionality of the deck through software, while still ensuring nothing feels fiddly or hard to navigate, which can be the case with hardware jog controllers like you’d find on a Zoom recorder, for instance.

Balancing simplicity and power is the real reason RODECaster Pro works so well. If you’re just starting out, you can basically just begin using it out of the box without changing anything at all about how it’s set up to work. That’s especially true if you’re using any of RODE’s microphones, each of which has built-in profiles included for optimizing sound settings instantly.

I mentioned above that the RODE PodMic is optimized for use with the RODECaster Pro in this way, and the results are fantastic. If the price tag on the RODECaster Pro is a deterrent, it’s worth considering that the PodMic is a fantastically affordable dynamic podcasting mic, which produces sound way above its class when paired with the deck. so the overall cost of a RODE podcasting setup using both of these would actually be relatively reasonable vs. other solutions. 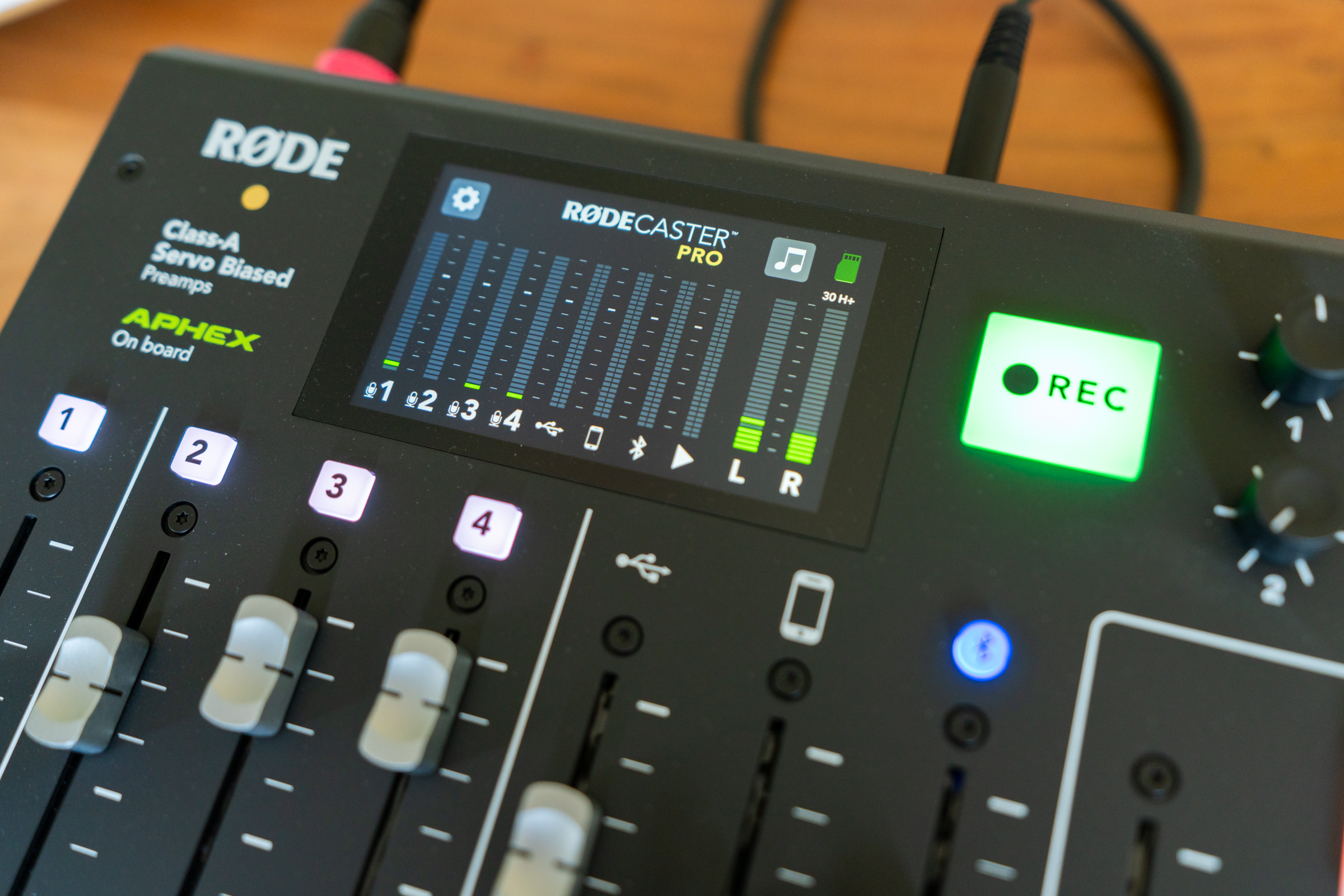 If you’re ready to dive in and customize sound, you can toggle features like built-in compressor, de-esser and other audio effects. You can also manually adjust each of these effects since the release of Firmware 2.1 earlier this month – letting you adjust the processing of each included sound effect through the RODECaster Pro companion app for a totally custom, unique finally sound.

The ability to pre-load and call up sound effects and other audio tracks on demand on the RODECaster Pro is another killer feature. It’s true that you could achieve a lot of this in editing post-recording, but having it all to-hand for use in live recording scenarios just feels better, and it also enables genuine interactions with your guests that wouldn’t be possible otherwise. That 2.1 firmware update also brought the ability to loop clips indefinitely, which could be great if you want to place a subtle backing track throughout your recording.

One final feature I’ll highlight because it’s fantastic especially in a world where it might be hard to consistently get guests in-studio is the smartphone connectivity. You can either plug in via cable, or connect via low-latency Bluetooth for terrific call-in interactivity, using whatever software you want on your smartphone.

RODE has done a great job building out an ecosystem of accessories to further extend the capabilities of the RODECaster Pro, and enhance the overall user experience. Among its recent releases, there’s the Rode PodMic, mentioned above, as well as colored cable clips that correspond to each input backlight color for easily keeping track of which hardware is which, 1/4″ to 3.5mm stereo jack adapters for using standard headphones as monitors, a TRRS-to-TRRS 3.5mm audio aux cable for smartphone connections, and a USB power cable to replace the adapter for easier plug-in power on the go. 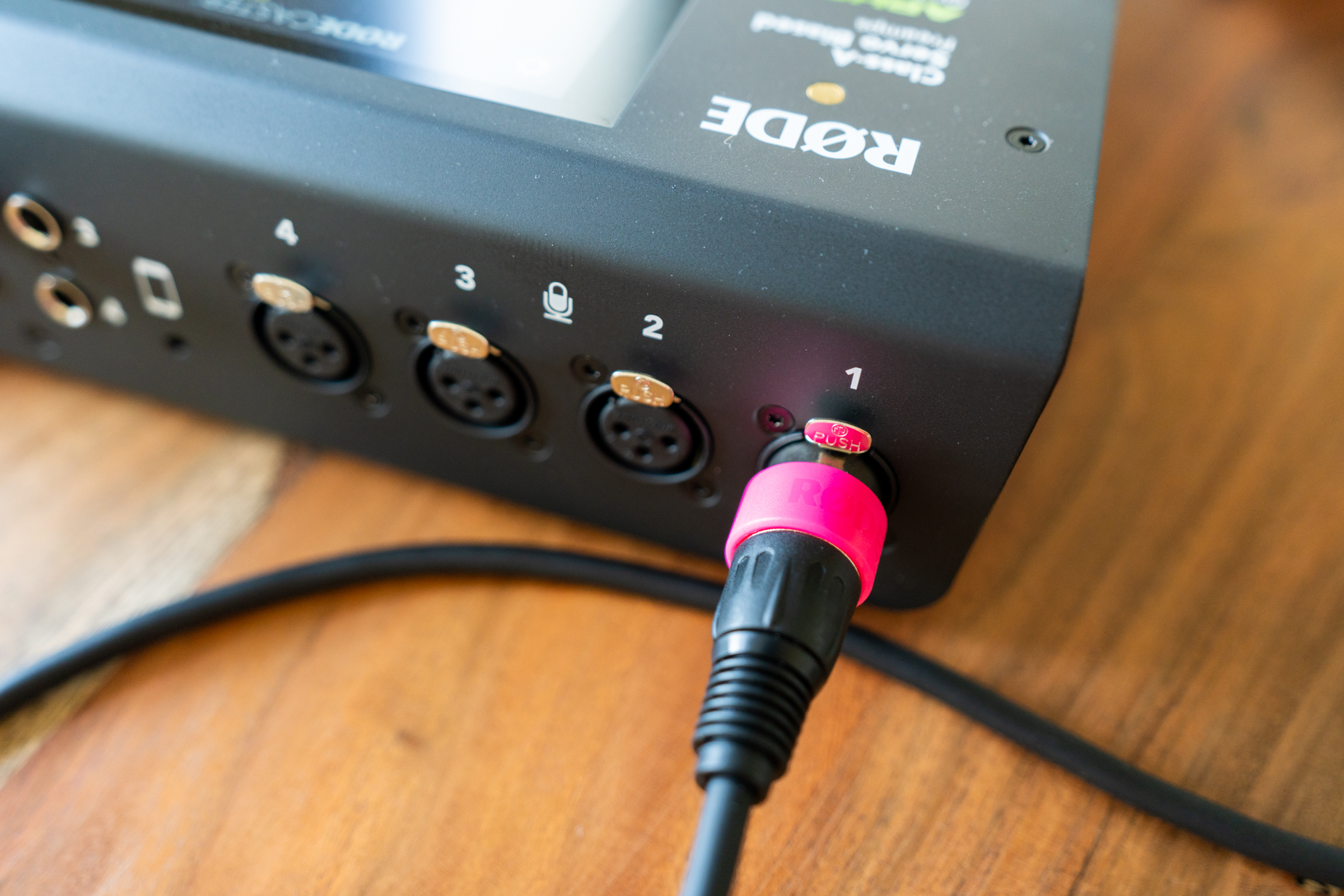 The small plastic cuffs for your XLR cables are simple but smart ways of keeping track of gear, especially when everyone’s using the same mic (as they likely should be for sound consistency) – and it helps that they enhance the look of your overall setup, too. And the USB power cable in particular is a great addition to any RODECaster Pro kit that you’re intending to use outside of your own recording studio/home, since you can use it with any USB charger you have to hand – so long as it can provide 5V/2.5A output.

The real must-have accessory for the RODECaster Pro, however, is the RODE PodMic. It’s a no-fuss, well-built and durable microphone that transports well and that can work flexibly with a wide range of mounting options, and in a wide variety of settings including open air and in-studio. Yes, you can get better sound with more expensive mics, but with the PodMic, you can afford a set of four to complement the RODECaster Pro for the same price you’d pay for one higher-end microphone, and most people won’t notice the audio quality difference for their podcasting needs. 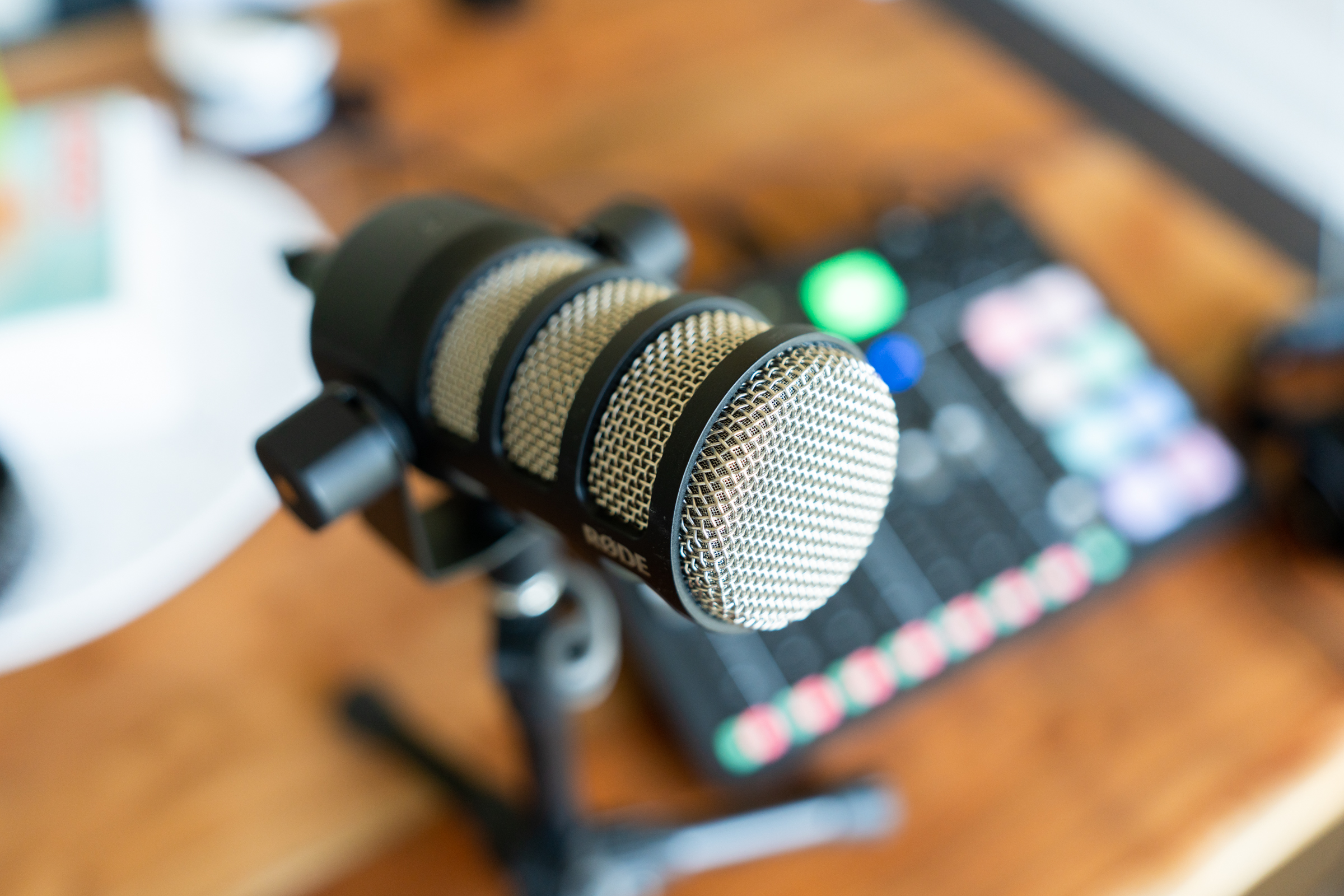 The RODECaster Pro is a fantastic way to upgrade your at-home podcasting game – and a perfect way to take the show on the road once you’re able to do so. Its high-quality hardware controls, combined with smart, sophisticated software that has improved with consistent RODE firmware updates to address user feedback over time, are a winning combo for amateurs, pros, and anyone along the spectrum in between.