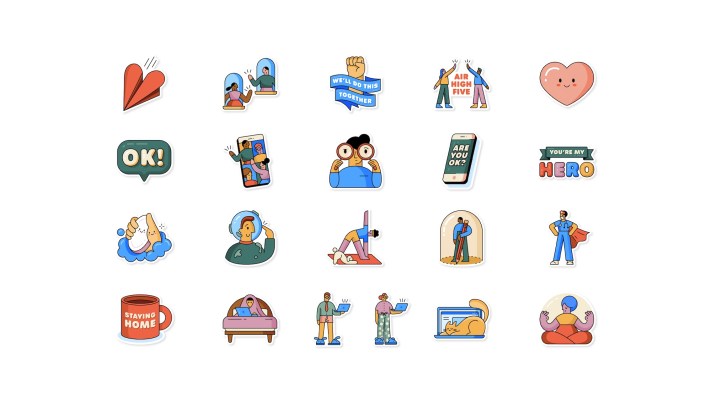 WhatsApp is deepening its collaboration with the World Health Organization as people across the globe grapple with the coronavirus pandemic. The Facebook -owned service said today it is attempting to appeal to users in a language that they speak “billions” of times a day on its platform: Stickers.

The service, with more than 2 billion users, today introduced a new sticker pack, called “Together At Home,” that captures the moments and emotions that people are going through each day.

The stickers, developed in collaboration with the WHO, are available in 10 languages, including Arabic, French, German, Indonesian, Italian, Portuguese, Russian, and Spanish.

“This pack offers creative ways to remind people to wash their hands, maintain distance, exercise, and importantly to celebrate medical heroes as well as the personal heroes in all of our lives,” WhatsApp, which added stickers feature on its platform in 2018, wrote in a blog post.

Stickers have become especially popular in developing markets such as India. Hike, a Tencent-backed messaging service in India, has added tens of thousands of stickers in recent months on its app and says it can’t make enough of them fast enough for its users.

Last month, WhatsApp collaborated with the WHO to launch an information service that reached more than 10 million users within days. The Facebook-owned service is also working with federal and state governments in many markets to help them deliver authoritative information about the infectious disease in many countries.

Additionally, WhatsApp said it is also introducing a new sticker pack based on the popular Japanese character Rilakkuma to give people more ways to express everyday emotions.

More features are on their way. The service has started to test group video and audio calls with eight users, up from four it supports currently. The feature, when rolled out to all users, could help WhatsApp compete more directly with Houseparty and Zoom that have reported major surge in their respective userbases in recent weeks.

WhatsApp, which recently introduced new limit on forwarding messages on its app, has also confirmed it is working on a new feature to help users identify whether the text or media content they have received asserts accurate information.