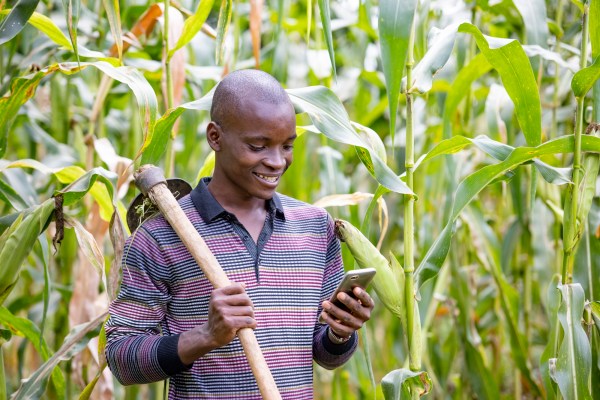 The vast majority of startups remain focused on consumers, knowledge workers and the opportunities to provide services to those that are already operating completely, or at least partially, in digital environments. But today comes news of funding for a startup building a social network for what is probably one of the least digital business sectors of all: independent, small-hold farmers in the developing world.

Wefarm, a social networking platform aimed at independent farmers to help them meet each other, exchange ideas and get advice, and sell or trade equipment and supplies, has raised $11 million funding to continue expanding its business, which now has 2.5 million users.

To put that number and the growth opportunity into some perspective, Wefarm estimates that there are some 400 million small-hold farmers globally, with a large proportion of them in developing markets.

The funding, an extension to the company’s 2019 Series A, is being led by Octopus Ventures. True Ventures (which led the 2019 round), Rabo Frontier Ventures, LocalGlobe, June Fund and AgFunder also participated. Wefarm has raised $32 million since being founded in 2005.

To date, London-based Wefarm has primarily found traction in countries in East Africa. Its service is available via a website, but most of its users are accessing without any internet use at all, via the company’s SMS interface. The SMS format has now hosted more than 37 million conversations from farmers engaging in around 400 different types of farming (from livestock or dairy to grains and fruits and vegetables) and $29 million in marketplace sales, the company said.

But rolling out SMS services can be slow, in part because it requires Wefarm to strike local deals with carriers over data usage. (That has also meant that the company has tightly controlled growth: if you go to the site, you’ll see that you can either join a waitlist or join by way of an invitation from an existing member.)

Kenny Ewan, Wefarm’s founder and CEO, said this latest tranche of funding in part will be used to roll out an app (currently in beta) that will help it launch in more countries and pick up more farmers.

“The big step we’re taking is going from SMS a digital, app-based service, which will remove the digital barrier,” he said in an interview. “We compare it to the shift from sending DVDs in the mail to streaming video online. We feel like the time is right and believe it could take us to the 100 million mark of users.”

From pandemics to locust plagues

Wefarm’s role in helping link up independent farmers — traditionally and by its nature one of the most analogue of industries — has taken on an interesting profile particularly in the last year.

The Covid-19 pandemic has thrown a stark light on a number of digital divides in the world, and one of most distinctive has been in the wider world of business. Entrepreneurs, companies and organizations that had digital strategies in place could hit the ground running to adapt to a “new normal” with less physical interaction. Those that did not had to scramble to get there to avoid a nosedive in activity. 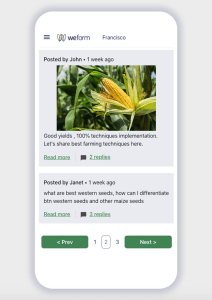 Wefarm was around for years before the Covid-19 pandemic, and in some regards it has always been championing and giving a digital voice to the underdogs.

The wider agricultural industry — globally a multi-trillion dollar enterprise, accounting for up to 25% of GDP in some markets — has undergone some significant digital transformation, but that has been focused on tools and other technology for the agribusiness sector, which includes the giant conglomerates and multinationals like Cargill, Archer-Daniels-Midland, Bayer (Monsanto’s parent), John Deere and others.

Wefarm’s importance (and often singular presence) as a tool for independent farmers to communicate, trade and generally network with others like them was already playing out before Covid-19. When we covered the company’s previous raise in 2019 (the first part of its Series A, a $13 million round) it had already grown to 1.9 million members. And, as it happens, for many of its users, Covid-19 was in some regards the least of their concerns:

“In reality a lot of people in rural Africa were concerned about the weather, or the effect of a locust plague,” Ewan said. “What we saw was traffic around not Covid, but these topics. They had different preoccupations.”

But the pandemic has had an impact, nevertheless. On the platform itself, as we saw in other e-commerce scenarios, Wefarm emerged as an essential service for trading at a time when in-person meetings were halted. As for Wefarm as a business, Ewan said that it essentially meant that the company’s country expansion plans had completely halted mainly because business development teams could no longer travel as they had before: another reason why launching an app could be a useful growth tool.

(That lack of travel was also potentially helpful to Wefarm: despite that the company still managed to grow by 600,000 more users, Ewan pointed out, underscoring a clear demand for the service among its target audience.)

Going forward, there are other ways in which Wefarm aims to leverage its user base, its network and the data that it potentially can amass from them.

“We see the possibility of providing more analytics and data. Our users want that very much,” Ewan said. “We now know more about small scale farmers than any one else, because they talk to us.” Areas that Wefarm is considering to develop over the next two years are whether it can help provide more insight into more workable business models, pricing models and more data on particular aspects like ripening periods.

“By building a highly engaged community of millions of small-holder farmers, Wefarm has created a powerful platform providing greater access to vital knowledge and information, which allows farmers to unlock greater economic potential from their land,” said Kamran Adle, early stage investor at Octopus Ventures. “In practice that might mean understanding which fertilisers work best, what the market price is for certain goods, or new farming techniques that result in better yields, all of which can make a significant difference to livelihoods. It’s also an enormous market with more than 400 million small-holder farmers globally who collectively spend around $400 billion on farming inputs. There is a huge opportunity for Kenny and the team at Wefarm to achieve incredible scale and we’re excited for the launch of its digital platform which will further accelerate growth.”