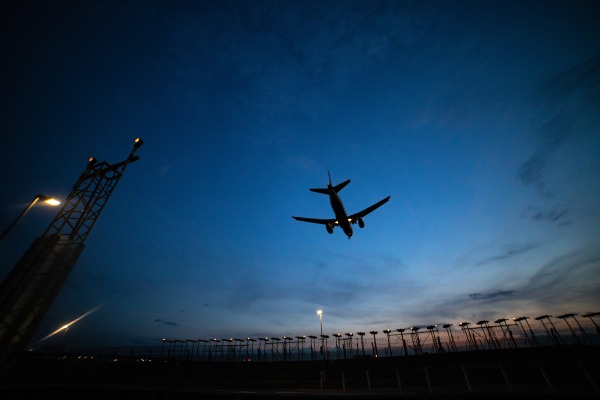 Mobile travel app Hopper has been hit hard by the COVID-19 pandemic as consumers canceled their trips and airlines dropped their flights. But the complications around getting airline credits and refunds have since turned into a customer service crisis for the airfare prediction and ticket booking startup, which had been valued at $750 million back in 2018 before reaching unicorn status thanks to an undisclosed round it closed amid COVID lockdowns this year. Currently, hundreds of Hopper customers are trashing the app in their app store reviews, calling Hopper a scam, threatening legal action and warning others to stay away.

The key complaint among many of these users was not only how their flight was canceled by an airline and that they couldn’t get a refund, but that there was no way to get in touch with someone at Hopper for any help. There wasn’t even a phone number to call, the user reviews said.

These complaints on the app stores have been harsh and a PR disaster for Hopper’s brand.

To give you an idea of what’s being said, here’s a small sampling:

To date, users have left more than 550 one-star reviews on iOS and 302 on Android, per Sensor Tower data. Hundreds of these are visible when you sort by “Most Recent” reviews on iOS, which is damaging to what had been, before the pandemic, a trusted and respected travel brand.

Hopper, to its credit, openly admitted to TechCrunch it’s been massively struggling with what it referred to as “unprecedented volumes of customer support inquiries since the start of the pandemic began,” or 2.5X its normal rate.

A number of the inquiries are from customers asking for refunds due to COVID-related cancellations. Typically, airlines offer a modified flight when they make a schedule change, and many consumers will take this modification. Some customers, however, will want a refund so they can rebook a different flight or because they’ve chosen to cancel their travel plans entirely. The pandemic has exacerbated this problem, driving cancelation rates around five times higher than usual, Hopper says.

Another point of confusion is who should handle these refunds. Hopper says customers can either reach out to the airline directly for a refund for help rebooking or they can ask Hopper to handle it. It also noted a small number of airlines don’t allow refunds, only travel credit. The airlines dictate these policies, which means Hopper can’t just offer to refund everyone — it would have lost too much money to survive, if it did so.

“We would have had to put out about half a billion dollars,” explains Hopper CEO Frederic Lalonde, describing the situation to TechCrunch. We had reached out to understand the situation, given the sizable customer backlash against the previously popular app.

“The way the airline system works is if I refund you as a customer who booked from us, I’m not going to get that money back. We would have put ourselves out of business,” Lalonde says.

In addition, Hopper doesn’t generally receive the refunds itself. They go directly from the airline to the customer. And many customers had to wait on refunds this year due to COVID issues. But there are some exceptions. For a few low-cost carriers, like Frontier, Spirit and others, Hopper does have to process the refund from the airline and then return these to the customers. So in these cases, Hopper’s non-responses to customer support inquiries left customers without options. (We’re documenting how the airlines are responding to our inquires about Hopper refunds here. It’s confusing, to say the least.)

But the root of Hopper’s customer service nightmare wasn’t the chaos caused by the pandemic and the airlines’ cancellations themselves. It was how Hopper approached handling the situation.

“We failed our customers,” Lalonde admits. “We had a bunch of people that trusted us.”

He said Hopper has now addressed many of the customer complaints and issues. But many more still remain. “There’s no universe where that’s what we set out to do,” he adds.

During the course of the year as the customer service crisis escalated, Lalonde says his personal email and mobile phone was published on the web. He’s since opened up several thousands — or maybe even tens of thousands — of emails and voicemails of customers in need of assistance.

In hindsight, one misstep Hopper made is that it didn’t hire more customer service agents to deal with what the pandemic would bring. In fact, Hopper did the opposite — the company furloughed agents in an effort to cut costs and stay in business. At the time, Lalonde explains, there was just too much uncertainty to hire. Stores were out of toilet paper. The Western world had closed for travel. Vaccines had typically taken years to create. This was looking like a long-term, worst-case scenario.

“We had to build an operational plan of zero dollars of revenue for four years. That’s what I gave my board,” Lalonde says.

When lockdowns lifted and travel started to come back, so did some of Hopper’s agents. But the customer service issues, by then, had skyrocketed as airlines canceled and changed schedules at high rates, and began to issue Future Travel Credits (FTC). Instead of adding more agents to help solve customer service problems, Hopper decided to apply automation, with a goal of allowing customers to solve more themselves. During the course of 2020, Hopper automated exchanging flights in the app, redeeming FTC issued by airlines, managing schedule changes, adding self-serve cancellations, and it rolled out follow-up emails to customers after they requested a cancellation.

Lalonde had believed automation would ultimately be more critical to long-term survival than hiring more agents.

“Would it have made a big difference [to add more agents]? Honestly, I don’t really think so. I think it would maybe have gotten 10% more done,” says Lalonde. “Could you find thousands of customers that would have gotten [help] sooner? Yes. But would it really have moved the needle on the millionth inbound request we got? No.”

Another area where Hopper fell short was on customer communication.

This is most apparent from the App Store complaints.

Customers may be expressing frustration over refunds, but they’re even angrier that they can’t get in touch with anyone. And Hopper didn’t necessarily do itself any favors here by sending out emails which said it was aiming to get back to customers within 24 hours — an entirely unrealistic promise (see below). 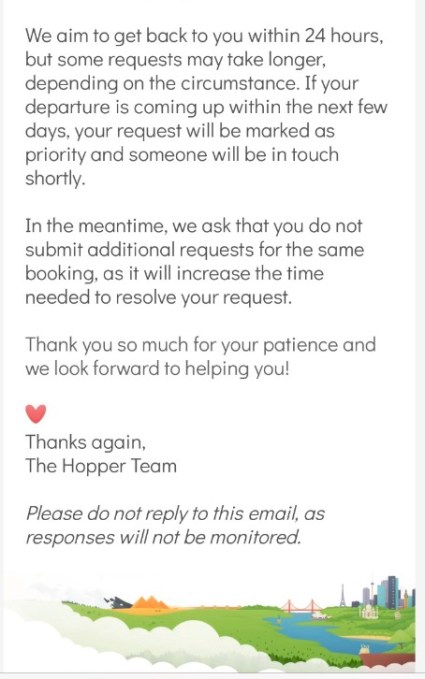 Hopper also chose to shut down its phone line when it realized that 80% of customers were waiting on hold for 45 minutes, even though, arguably, some customers would have preferred that to nothing at all. Instead, it rolled out an online structured triage system that helped prioritize incoming complaints. It even had a button to push if users were stuck at the airport so they could get more urgent assistance.

He says he decided to put the team on actually dealing with the FTC and the refunds, and not talking to people. “That made us look a hell of a lot worse, optically, but we got through a lot of work…because at the end of the day, after the fifth repetitive email, people got just as angry [as when they were ignored].”

Hopper has since apologized to customers and sent out an additional $1.5 million in travel credits to its customers, in addition to the refunds it has now processed, to help make up for its issues. It’s still working through the backlog of customer service issues. And it expects another good six months of chaos as the vaccines shipping now aren’t immediately going to solve the airlines’ travel problem.

Over the next two months, Hopper also says it will be increasing its support team by 75% now that the future looks more certain. It also plans to roll out in-app updates including a resolution center, escalation path, status check to prevent duplicate requests and add in-app structured requests, in addition to more communication updates involving email campaigns, better in-app messaging, and website access to check on booking status.

It’s a wonder how a company in this nightmare situation could even survive, much less raise funds, when its brand is being dragged through the mud and hundreds — or even thousands — of customers have been unsatisfied.

As it turns out, Montreal-headquartered Hopper will survive, at least in the near-term, thanks to a Canadian government bailout.

In early May, Hopper raised $70 million from both institutional and private investors. The Canadian government chose to save promising tech business impacted by the pandemic with direct financial support. The largest portion of the $70 million round (more than half, but not, say, 99%) included funds from the Business Development Bank of Canada (BDC) and Investissement Quebec. In addition, all of Hopper’s existing investors returned, joined by new investors Inovia and WestCap.

The Canadian government — which Lalonde describes as “more like socialists than you would think” — helped by de-risking the other investors by leading venture rounds into tech businesses that had been doing well pre-pandemic.

“They did this at a very large scale and it’s stabilized the tech sector in Canada,” he says. The new funds now value Hopper “right at unicorn level” in U.S. dollars, Lalonde adds, meaning the business is valued around $1 billion.

One reason why Hopper may have struggled with how to proceed during the pandemic was the sizable uncertainty around the U.S. market, which Lalonde says was “very scary.”

“We never knew what was going to happen. If there had been a better plan there, we probably would have been able to provision a bit more. But we had no idea. The lockdowns were at the state level,” he explains. “If you’re trying to figure out how aggressive you want to be on investing, spending, emergency injections, or how things are going to recover, the more predictability there is at the government level, the easier it is to make a decision. The U.S. wasn’t the most predictable environment,” Lalonde says.

While Hopper’s business is saved for now, the app’s brand reputation has taken a huge hit.

The question now is whether that, too, is recoverable?

“I don’t know,” says Lalonde. “I’ll tell you this, the only right way to approach that is just keep doing the right thing, one customer at a time.”