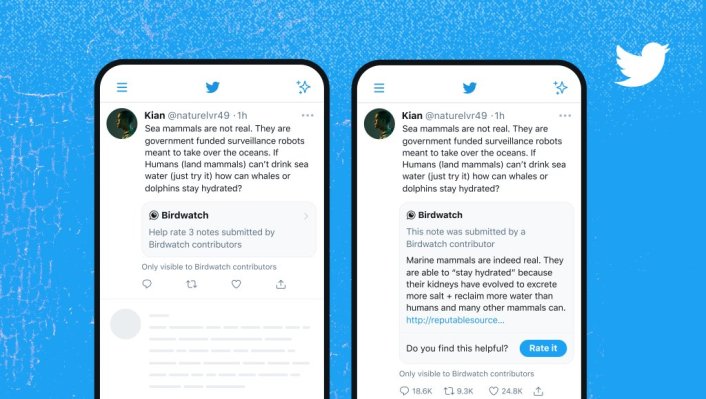 Twitter is looking to crowdsource its way out of misinformation woes with its new product Birdwatch which taps a network of engaged tweeters to add notes to misleading tweets. Today, Twitter announced that they are starting to roll out the Birdwatch notes to pilot participants across iOS, Android and desktop.

The company launched a pilot version of the program back in January, describing the effort as a way to add context to misinformation in real time.

“We believe this approach has the potential to respond quickly when misleading information spreads, adding context that people trust and find valuable” Product VP Keith Coleman wrote in a blog post at the time. “Eventually we aim to make notes visible directly on Tweets for the global Twitter audience, when there is consensus from a broad and diverse set of contributors.”

That time is apparently now for an early set of Birdwatch pilot participants.

Hey there! Exciting news 🎉. Now, when you’re browsing Twitter on Android, iOS, or https://t.co/lEjTtR4BGM, you may see Tweets with Birdwatch notes. Notes will appear in a card on the Tweet. Right now, this feature is only visible to pilot participants. pic.twitter.com/dyMHgawLUl

There have been an awful lot of questions about how and whether Birdwatch will work inside the current social media framework. Using community feedback differs from more centralized efforts used by platforms like Facebook that have tapped independent fact-checking organizations. Twitter is clearly aiming to decentralize this effort as much as it can and put power in the hands of Birdwatch contributors, but with audiences of individual tweeters currently responsible for deeming the helpfulness and visibility of fact checks, it’s clear this is going to be a pretty messy solution at times.