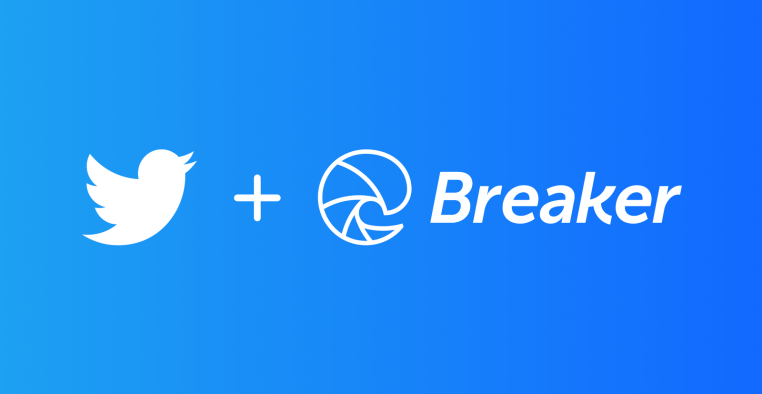 Twitter has acquired social broadcasting app Breaker, the companies announced today via a combination of blog posts and tweets. The deal will see Breaker’s team joining Twitter to help “improve the health of the public conversation” on the service, as well as work on Twitter’s new audio-based networking project, Twitter Spaces. The Breaker app, however, will shut down on January 15, 2021.

Breaker announced the acquisition on its company blog, explaining why it believes its team will be a good fit at Twitter.

“Here at Breaker, we’re truly passionate about audio communication and we’re inspired by the ways Twitter is facilitating public conversations for people around the world,” wrote Breaker CEO Erik Berlin. “We’re impressed by the entrepreneurial spirit at Twitter and enthusiastic about the new experiences that the team is creating.”

Breaker was founded in 2016 and is led by both CEO Berlin, previously the founder and CTO at social advertising company 140 Proof (which sold to Acuity), and CTO Leah Culver, who previously founded Pownce and Grove and co-authored web technologies OAuth and oEmbed.

The app had launched at a time when podcasts were still very much thought of as audio feeds and podcast apps as productivity tools — not experiences around which a community could be built. Breaker helped to change that perception by offering an app where users could like and comment on episodes, discover new podcasts by following friends, share favorite shows to social media and much more.

According to Culver’s tweet, she’ll be joining Twitter with a focus on Twitter Spaces, Twitter’s audio-based social networking product and Clubhouse rival. Spaces lets Twitter users chat in real time using voice instead of text, as they do today. The new product entered beta testing in December. Twitter is currently trying to work out not only the technical issues and bugs with the feature, but also the more complex issues that arise from hosting live audio, including moderation.

In a separate tweet, Twitter Engineering lead Michael Montano confirmed that Berlin, Culver and Breaker designer Emma Lundin will all be moving to Twitter as a result of the deal.

He also praised both Berlin and Culver’s entrepreneurial spirit as well as Culver’s push for open standards over the years.

Breaker says it will close in a matter of days its apps and services it built over the past years.

On January 15, 2021, Breaker will shut down for good. Up until that point, Breaker users will be able to export their OPML file to transfer their subscriptions to another podcasting app. Breaker recommends apps like Apple, Spotify, Stitcher, Overcast, Pocket Casts or Castro as an alternative. For those hosting a podcast on Breaker, these can be transferred elsewhere via the RSS feed.

The Breaker acquisition adds to a string of recent podcast M&A activity. But unlike recent deals that involved podcast content, Breaker’s sale is made up of staff and technology, not podcasts themselves. This maps to Twitter’s general focus on collating content from others instead of making its own.

The Breaker deal, with its unannounced price, feels modest. Which means that while the company’s exit to Big Tweet is another point on the board for podcasting companies finding their way to some sort of payout, it fits the general narrative that podcasting services and podcasting content only has so much value.

That another podcast service sold for around $300 million has become a running joke. That number, while impressive-sounding to the individual, is not the sort of exit that venture capitalists target. The Breaker-Twitter tie-up, then, doesn’t push back on the idea that building a company focused on podcasting is to admit to a future that will have capped future upside.

Whether venture capitalists pull back from podcasting investments in 2021 is not yet clear, but Breaker’s sale does little to argue that private investors shouldn’t.

The real winner in the Breaker deal is Twitter, as it gains key talent as it enters what is shaping up to be a buzzy new market in 2021 for voice-based social networking — an idea whose time has come, perhaps, thanks to people being stuck at home amid a pandemic. Without conferences and parties to attend, many went in search of better ways to connect online.

But it remains to be seen if Twitter — a service that has publicly struggled with online toxicity and moderation failures — will be able to make audio networking a safe place for users to chat, or if it will amplify Twitter’s existing challenges in these areas. It also remains to be seen if voice-based networking will have a future in a reopened, post-COVID world where we can once again meet others in real-world, public places, instead of Twitter Spaces.