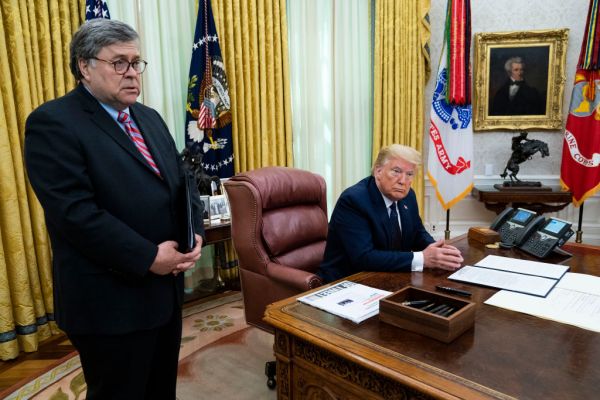 On Thursday, President Trump signed an executive order targeting the legal shield that internet companies rely on to protect them from liability for user-created content. That law, known as Section 230 of the Communications Decency Act is essential to large social platforms like Twitter, YouTube and Facebook, the kind of companies the president has long accused, without evidence, of engaging in anti-conservative censorship.

Trump was joined during the signing by Attorney General William Barr, who has previously expressed interest in stripping away or limiting the same legal protections for tech companies.

This will be a Big Day for Social Media and FAIRNESS!

We previously examined a draft of the executive order that’s likely to bear a close resemblance to the just-released final version, embedded below. Among other things, the draft argued that platforms forfeit their rights to legal protection when they moderate content, as in the case of Twitter modifying the president’s tweet with a fact-checking disclaimer.

“The choices Twitter makes when it chooses to edit, blacklist, shadowban are editorial decisions, pure and simple,” Trump said during the signing. “In those moments, Twitter ceases to be a neutral public platform and they become an editor with a viewpoint. And I think we can say that about others also, whether you’re looking at Google, whether you’re looking at Facebook.”

On Tuesday, Twitter added warning labels to two tweets from the president that made false claims about vote-by-mail systems. The labels, which did not hide the tweets or even actually outright call them false, pointed users toward a fact-checking page. The move enraged the president, who lashed out at the company through tweets, specifically targeting Yoel Roth, Twitter’s head of site integrity.

The executive order makes it clear that the president’s spat with Twitter inspired the action, though some of its language is likely recycled from an abandoned effort at a similar order last August.

“Twitter now selectively decides to place a warning label on certain tweets in a manner that clearly reflects political bias,” the unusual order reads. “As has been reported, Twitter seems never to have placed such a label on another politician’s tweet.”

Civil rights groups and internet freedom watchdogs denounced the order Thursday, with Oregon Senator Ron Wyden, the co-creator of the law in Trump’s crosshairs, denouncing his actions as “plainly illegal.”

“As the co-author of Section 230, let me make this clear — there is nothing in the law about political neutrality,” Wyden said of the order.

“It does not say companies like Twitter are forced to carry misinformation about voting, especially from the president. Efforts to erode Section 230 will only make online content more likely to be false and dangerous.”

This story is developing