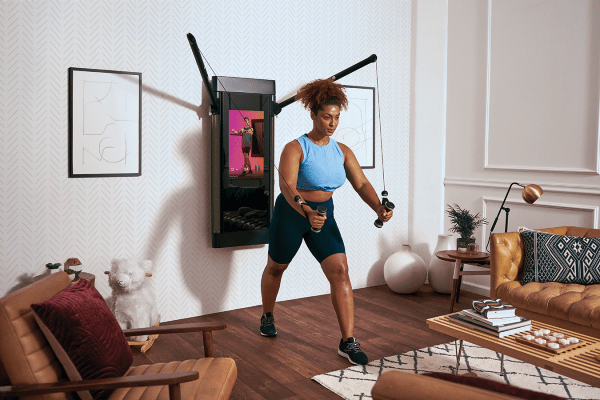 Tonal, maker of the smart home fitness trainer, announced it is more than tripling the number of physical locations it sells devices in through a new partnership with Nordstrom.

Starting this month, Tonal will have 50-square-foot stations in the women’s activewear departments of at least 40 Nordstrom locations across the U.S., bringing the total number of Tonal physical locations to 60 by the end of 2021. Shoppers will be able to walk in or book appointments to try Tonal devices and purchase them through employees on-hand.

“As we looked to expand our retail footprint and strategy, we looked to the retail landscape, and we really feel like Nordstrom says ‘best-in-class’ — the department store is well-suited to succeed in a COVID and post-COVID world,” explained Christopher Stadler, Tonal’s CMO.

Tonal, which manufactures a wall-mounted device with a digital weight system that emulates various traditional gym stations, already operates 16 locations across the country with devices shoppers can try and work out to, with plans to open four additional showrooms later this year. But the partnership with Nordstrom, which expects overall sales growth of 25% in 2021, marks a first-of-its-kind for at-home fitness makers. Peloton, for instance, operates a larger network of dedicated showrooms in the U.S., Canada, Germany and the UK, but it has yet to partner with an outside retailer to display and demo its bikes and treadmills.

Tonal’s physical expansion arrives amid a boom in demand for at-home equipment during the pandemic. According to Stadler, sales of Tonal equipment surged 800% from December 2019 to December 2020, causing 10-12 week wait times for deliveries. Those delays are somewhat comparable to Peloton, which has also faced significant delivery wait times in recent months and currently reports 6-10 week delays — an issue Peloton CEO John Foley acknowledged and apologized for in a note to users.

Tonal, for its part, is working to address shipment delays. According to Stadler, the startup has significantly ramped up production of devices, increased employee headcount, and in some cases, now air-ships equipment from Taiwan to the U.S. to meet demand.

“We have seen extraordinary demand for Tonal, and we’re working aggressively around the clock to produce, deliver and install Tonals faster and faster,” says Stadler. “We’ve absolutely ramped up production, and all facets of the organization are rallying to deliver our customer orders as quickly as we can.”

Early Stage is the premiere ‘how-to’ event for startup entrepreneurs and investors. You’ll hear first-hand how some of the most successful founders and VCs build their businesses, raise money and manage their portfolios. We’ll cover every aspect of company-building: Fundraising, recruiting, sales, legal, PR, marketing and brand building. Each session also has audience participation built-in – there’s ample time included in each for audience questions and discussion.