Tesla says its battery innovations will deliver its goal of a $25,000 mass market electric car – TechCrunch 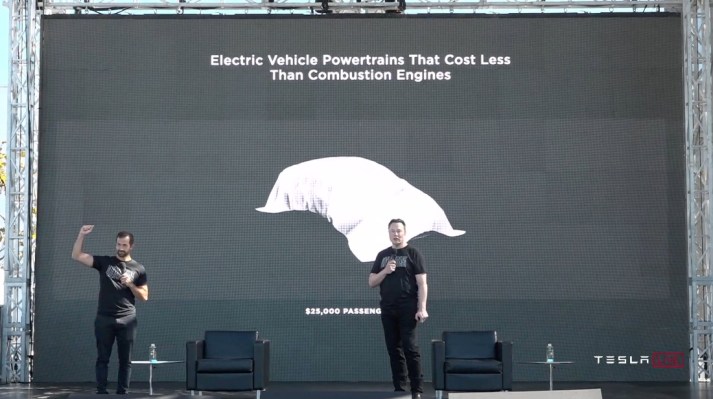 Tesla held its Battery Day event on Tuesday to discuss a variety of innovations it has developed and is pursuing in battery technology for its vehicles. At the event, Tesla CEO Elon Musk and SVP of Powertrain and Energy Engineering Drew Baglino detailed new anode and cathode technology it’s working on, as well as materials science, in-house mining operations and manufacturing improvements it’s developing to make more more affordable, sustainable batteries — and they said that taken together, these should allow them to make an electric vehicle available to consumers at the $25,000 price point.

This isn’t the first time that Musk has talked about the $25,000 price point for a Tesla car: Two years ago, in August 2018, he said that he believed the company would be able to reach that target price point in roughly three years. Two years on, it seems like the goal posts have been pushed out again — fairly standard for an Elon-generated timeline — since Musk and Baglino acknowledged that it would be another two or three years before the company could realize the technologies it presented in sufficient quantities to be produced effectively at scale.

Tesla detailed a new, tabless battery cell design that would help it achieve its goal of reaching 10 to 20 terawatts of global battery production capacity per year. The design offers five times the energy density of the existing cells it uses, as well as six times the power and an overall 16% improvement in range for vehicles in which it’s used.