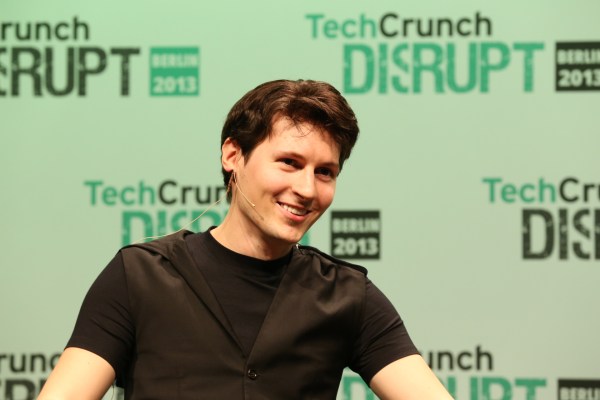 Messaging platform Telegram, which recently passed 500 million monthly active users but still isn’t monetizing all the digital chatter it hosts — has taken in a little more funding to keep its engines ticking over.

The investment is touted as a strategic partnership, with Mubadala anticipating benefits for Abu Dhabi’s startup ecosystem by having a local Telegram presence drawing in skills and talent to the capital.

Per Reuters Telegram will be opening an office in Abu Dhabi following the investment — building out its regional presence from a Dubai, UAE base.

Commenting in a statement, Pavel Durov, Telegram founder and CEO, said: “We are honoured by the $150M investment into Telegram from Mubadala and Abu Dubai Catalyst Partners. We look forward to developing this strategic partnership to continue our growth in the MENA region and globally.”

To date, Telegram has been bankrolled over a seven+ year lifespan by Durov, who made ~$300M from selling his stake in the vk social network he also founded — aka Russia’s ‘Facebook’ — back in 2015.

But sustaining a messaging platform with half a billion users can’t be done through billionaire bootstrapping alone.

Some additional investment did come in via Telegram’s recent attempt to launch a blockchain platform. However the effort was derailed by US regulators last year — forcing it to refund most (but not all) of the money it had booked for the failed TON platform — so speculation over how Telegram will monetize its platform goes on.

In recent weeks Durov has responded to this chatter via his public Telegram channel to confirm he’s considering introducing ads for “large one-to-many channels” — but pledging he won’t do so in chats.

He has also rejected the notion of using user data to target ads — a move that would undermine the loud privacy promises Telegram repeatedly makes to users to put clear blue water between its platform and the (Facebook-owned) data-mining competition.

“Users will be able to opt out of ads, but I do think that privacy-conscious ads are a good way for channel owners to monetize their efforts — as an alternative to donations or subscriptions, which we are also working to offer them,” Durov wrote last month.

Telegram’s usage has, meanwhile, continued to swell this year — boosted by users switching from Facebook-owned WhatsApp over privacy concerns. So there’s limited room for copycat monetization, unless Durov is willing to trash his personal ‘pro-privacy, pro-user’ brand. To say that’s highly unlikely is an understatement.

Nonetheless, he has further limited his options by rejecting a series of investment offers in recent months.

A report in Russian press earlier this year said he’d rejected an investment offer for a 5%-10% stake in the company that had valued it at $30BN. We’ve also been told he rejected a higher offer that had valued Telegram at $35BN — and another of $4BN at a $40BN pre-money valuation.

“Durov is afraid of investors of any kind,” one source told us on why he refused to give up any equity.

Debt financing seems to be Telegram’s preferred route at this stage. Back in January The Information reported that it was discussing raising up to $1BN in debt financing from with banks and investors — which would convert to shares in an eventual public offering.

That debt route — via pre-IPO convertible bonds — is now taking shape with today’s investment news out of Abu Dhabi. Although $150M is a lot less than the rumoured $1BN so this may be just an initial tranche. (And may in fact be needed to pay back TON investors’ whose refunds are falling due.)

But with a couple of debt backers sticking their necks out to take a punt on Durov’s anti-establishment alternative — and on the chance of an Telegram IPO by 2026 — the company is in a better position to get buy in from other debt funders, including in the region as it deepens its geographical commitment to the Middle East.

One key attraction for Telegram backers is likely to be its agile product dev. There Durov has repeatedly shown he can deliver — growing usage of his platform with the help of a steady pipeline of user-focused features.

Efforts on the product side at this stage look geared towards pivoting into a Patreon-style platform for content creators to build communities of followers willing to pay for their content (which would thereby enable Telegram to monetize by taking a cut as commission).

“Our end goal is to establish a new class of content creators — one that is financially sustainable and free to choose the strategy that is best for their subscribers,” wrote Durov last month. “Traditional social networks have exploited users and publishers for far too long with excessive data collection and manipulative algorithms. It’s time to change this.”

Just over a month later his channel lit up again with more product news — this time capitalizing on the buzz around social audio with the announcement of the launch of a Clubhouse-clone on Telegram channels dubbed “voice chats 2.0”.

He also announced feature that lets admins of channels and public groups host voice chats for millions of live listeners — taking the cap off the earlier feature. “No matter how popular your talk gets, new people will be able to tune in. It’s like public radio reinvented fo the 21st century,” Telegram’s blog post enthused.

Durov had more developments to tease: One-to-many video broadcasts that will see the platform let users host their own ‘TV stations’ which he said will be coming this “spring”. So Telegram continues to evolve as the social app landscape shifts.

“We believe this creates a strong value proposition and will be a focal point for social media platforms and a new era of messaging,” he added.