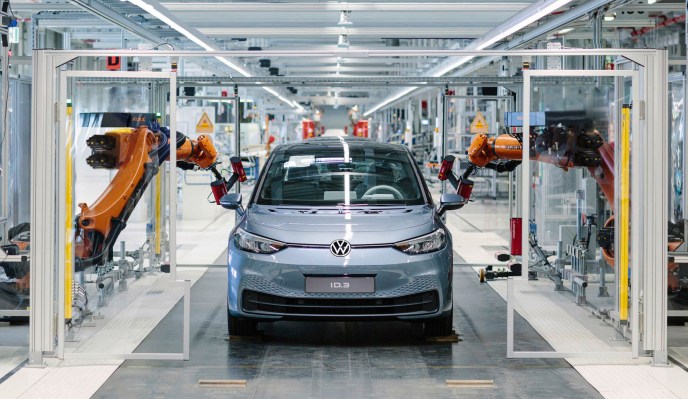 Northvolt, the Swedish battery manufacturer which raised $1 billion in financing from investors led by Goldman Sachs and Volkswagen back in 2019, has signed a massive $14 billion battery order with VW for the next 10 years.

The big buy clears up some questions about where Volkswagen will be getting the batteries for its huge push into electric vehicles, which will see the automaker reach production capacity of 1.5 million electric vehicles by 2025.

The deal will not only see Northvolt become the strategic lead supplier for battery cells for Volkswagen Group in Europe, but will also involve the German automaker increasing its equity ownership of Northvolt.

As part of the partnership agreement, Northvolt’s gigafactory in Sweden will be expanded and Northvolt agreed to sell its joint venture share in its Salzgitter, Germany factory to Volkswagen as the car maker looks to build up its battery manufacturing efforts across Europe, the companies said.

The agreement between Northvolt and VW brings the Swedish battery maker’s total contracts to $27 billion in the two years since it raised its big $1 billion cash haul.

“Volkswagen is a key investor, customer and partner on the journey ahead and we will continue to work hard with the goal of providing them with the greenest battery on the planet as they rapidly expand their fleet of electric vehicles,” said Peter Carlsson, the co-founder and chief executive of Northvolt, in a statement.

Northvolt’s other partners and customers include ABB, BMW Group, Scania, Siemens, Vattenfall and Vestas. Together these firms comprise some of the largest manufacturers in Europe.

Back in 2019, the company said that its cell manufacturing capacity could hit 16 gigawatt hours and that it had sold its capacity to the tune of $13 billion through 2030. That means that the Volkswagen deal will eat up a significant portion of expanded product lines.

Back when the company first announced its $1 billion investment round, Carlsson had said that Northvolt would need to build up to150 gigawatt hours of capacity to hit targets for 2030 electric vehicle sales.

The plant in Sweden is expected to hit at least 32 gigawatt hours of production, thanks in part to backing by the Swedish pension fund firms AMF and Folksam and Ikea-linked IMAS Foundation, in addition to the big financial partners Volkswagen and Goldman Sachs.

Northvolt has had a busy few months. Earlier in March the company announced the acquisition of the Silicon Valley-based startup company Cuberg.

That acquisition gave Northvolt a foothold in the U.S. and established the company’s advanced technology center.

The acquisition also gives Northvolt a window into the newest battery chemistry that’s being touted as a savior for the industry — lithium metal batteries.

Cuberg spun out of Stanford University back in 2015 to commercialize what the company called its next-generation battery, combining a liquid electrolyte with a lithium metal anode. The company’s customers include Boeing, BETA Technologies, Ampaire and VoltAero, and it was backed by Boeing HorizonX Ventures, Activate.org, the California Energy Commission, the Department of Energy and the TomKat Center at Stanford.

Cuberg’s cells deliver 70% increased range and capacity versus comparable lithium ion cells designed for electric aviation applications. The two companies hope they can apply the technology to Northvolt’s automotive and industrial product portfolio with the ambition to industrialize cells in 2025 that exceed 1,000 Wh/L, while meeting the full spectrum of automotive customer requirements, according to a statement.

“The Cuberg team has shown exceptional ability to develop world-class technology, proven results and an outstanding customer base in a lean and efficient organization,” said Peter Carlsson, CEO and co-founder, Northvolt in a statement. “Combining these strengths with the capabilities and technology of Northvolt allows us to make significant improvements in both performance and safety while driving down cost even further for next-generation battery cells. This is critical for accelerating the shift to fully electric vehicles and responding to the needs of the leading automotive companies within a relevant time frame.”