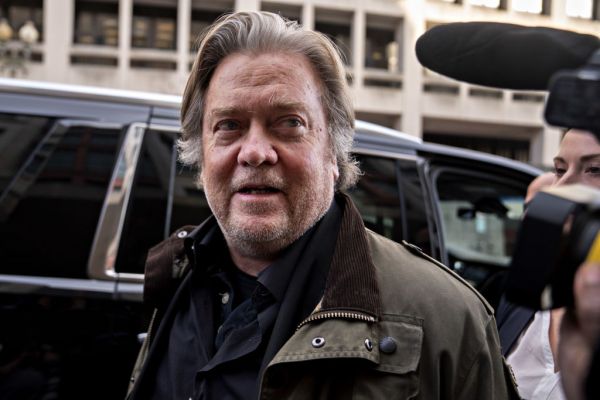 Former presidential advisor and right-wing pundit Steve Bannon had his show suspended from Twitter and an episode removed by YouTube after calling for violence against FBI director Christopher Wray and the government’s leading pandemic expert, Dr. Anthony Fauci.

Bannon, speaking with co-host Jack Maxey, was discussing what Trump should do in a hypothetical second term. He suggested firing Wray and Fauci, but then went further, saying “I’d actually like to go back to the old times of Tudor England, I’d put the heads on pikes, right, I’d put them at the two corners of the White House as a warning to federal bureaucrats.”

This may strike one at first as mere hyperbole — one may say “we want his head on a platter” and not really be suggesting they actually behead anyone. But the conversation continued and seemed to be more in earnest than it first appeared:

Maxey: Just yesterday there was the anniversary of the hanging of two Tories in Philadelphia. These were Quaker businessmen who had cohabitated, if you will, with the British while they were occupying Philadelphia. These people were hung. This is what we used to do to traitors.

Whether one considers this only nostalgia for the good old days of mob justice or an actual call to bring those days back, the exchange seems to have been enough for moderators at YouTube and Twitter to come down hard on the pair’s makeshift broadcast.

Twitter confirmed that it has “permanently suspended” (i.e. it can be appealed but won’t be restored automatically) the account for violating the rule against glorifying violence.

YouTube removed the episode from “Steve Bannon’s War Room” channel Wednesday afternoon after it was brought to their attention. A representative for the platform said “We’ve removed this video for violating our policy against inciting violence. We will continue to be vigilant as we enforce our policies in the post-election period.”

Online platforms have struggled with finding the line between under and over-moderation. Facebook, Twitter, YouTube, TikTok, Instagram and others have all taken different measures, from preemptively turning off features to silently banning hashtags. Facebook today took down a group with more than 300,000 members that was acting as an amplifier for misinformation about the election.

While the platforms have been vigorous in at least some ways in the labeling and isolation of misinformation, it’s more difficult for video platforms. Just minutes ago Trump took to YouTube to detail a variety of unfounded conspiracy theories about mail-in voting, but the platform can’t exactly do a live fact-check of the president and shut down his channel. More than with text-based networks, video tends to spread before it is caught and flagged due to the time it takes to review it.