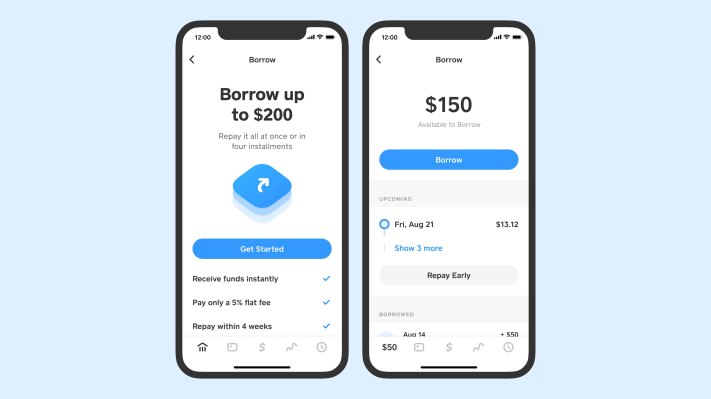 Cash App, the peer-to-peer payments service from Square, is giving select users a way to get short-term loans.

The company said it’s only testing the feature with around 1,000 users for now. But it could become more broadly available — and there are probably plenty of people who could use the money, given the state of the U.S. and global economy, not to mention the current uncertainty about further stimulus plans.

Cash App is starting out by offering loans for any amount between $20 and $200. You’ll be expected to pay the loan back in four weeks, along with a flat fee of 5%. (Multiplied over a year, that turns into a 60% APR — which sounds high, but at least it’s significantly lower than the average payday loan.)

If you don’t pay off the loan after four weeks, you’ll get an additional one-week grace period, then Square and Cash App will start adding 1.25% (non-compounding) interest each week. You also won’t be able to take out an additional loan if you’ve previously defaulted.

“We are always testing new features in Cash App, and recently began testing the ability to borrow money with about 1,000 Cash App customers,” a company spokesperson said in a statement. “We look forward to hearing their feedback and learning from this experiment.”

Square has already been expanding Cash App’s features beyond simple peer-to-peer money transfer with things like the Cash Card (a free debit card), Cash Boost (rewards) and Cash App Investing. And beyond Cash App, Square has been offering loans to small businesses through its Square Capital arm.