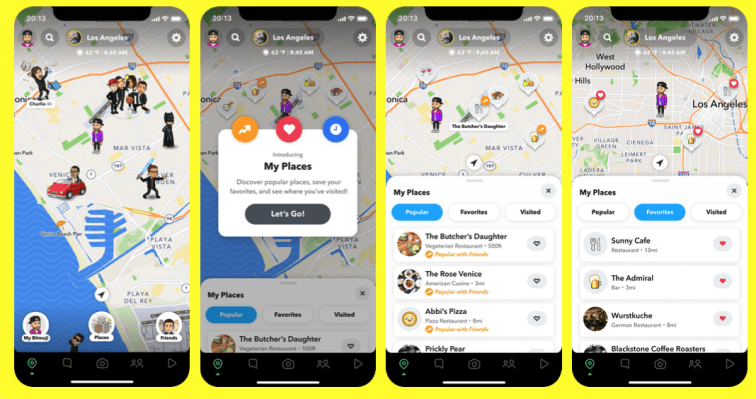 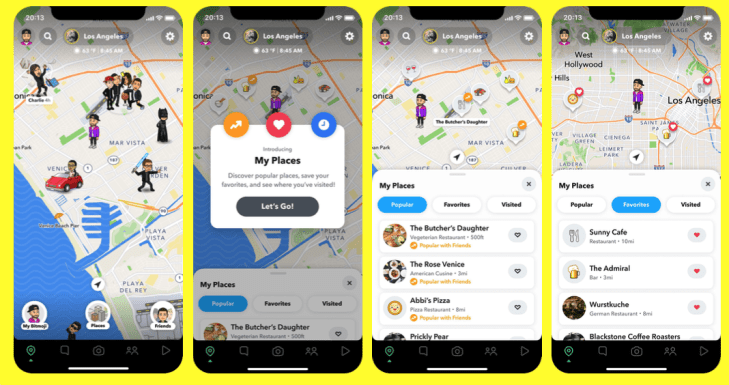 As more people are venturing out into the world this summer (safely, we hope!), Snapchat wants to make it easier for people to find restaurants, stores, parks and other interesting spots in their neighborhood. Today, Snapchat is starting to roll out the My Places feature on its Snap Map, which connects users with over 30 million businesses. Users can log their favorite spots, send them to friends, and find recommendations.

My Places has three main tabs: visited, favorites and popular. Visited lists places you’ve checked into on Snapchat, and favorites saves, well, your favorites. But the popular tab is particularly interesting because it marks the first time that Snapchat is using an algorithm to provide personalized recommendations to help people engage with the world around them. The algorithm considers where you are, what you’ve tagged or favorited already, and where your friends and other Snapchatters have visited.

This further differentiates the social-forward Snap Map from more established resources like Google Maps and Apple Maps, which you can’t really use to find out what restaurants your friends like. Sure, Snapchat can’t give you directions to that trendy sushi bar, but it’s not meant to, just like how Google Maps isn’t meant to show you what bar all your friends went to without you last night.

Snapchat shared survey results indicating that its users are more likely on average to engage in “post-pandemic” activities (is that a good thing?) and added that 44% of Snapchatters turn to the Snap Map to find places around them that they’re interested in.

With over 250 million monthly active users on Snap Map, the company announced an update in May called Layers, which lets partner companies add data directly to their own map. So far, Snapchat has collaborated with Ticketmaster and The Infatuation, a restaurant recommendation website — these partnerships help users see where they can find live entertainment, or what great restaurants are hidden in plain sight. Snapchat plans to further integrate Layers into Snap Map and My Places later this year.

Last week, Snap announced that during Q2 this year, it grew both revenue and daily active users at the highest rates it has achieved in the last four years. Year over year, the app grew 23%.