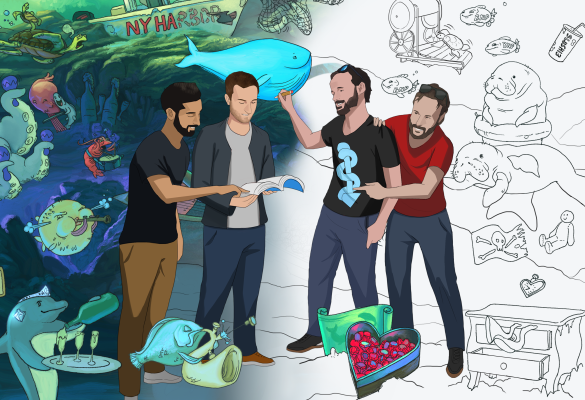 Studying for med school is tough. What if it was more Pixar-like?

Sketchy, a visual learning platform, takes complex material that a med student might need to memorize for an exam, and puts the information in an illustrated scene. For example, it uses a countryside kingdom to explain the coronavirus, or a salmon dinner to explain Salmonella. The goal is for a student to be able to mentally go back to the scene while taking an exam, walk through it and retrieve all of the information.

While Sketchy’s strategy might seem odd, it’s actually well-known. The “memory palace” technique matches objects to concepts for easier memorization. So far, Sketchy has more than 30,000 paid subscribers and is on track to hit $7 million in revenue this year.

To charge this growth and break into new content verticals, Sketchy is taking venture capital on for the first time in its seven-year history. Last month, the team announced that it has raised a $30 million Series A led by The Chernin Group (TCG). Today, some of those shares were sold in a secondary transaction Reach Capital, which now accounts for $3 million of the financing.  It’s a big combined investment for a company that has been bootstrapping since birth — and the deal could help us see where online education is heading.

The capital comes as Sketchy itself looks to grow past a content service for med students, and into an education platform tackling information in critical fields, from legal to nursing. With the new money, Sketchy plans to build an in-house animation studio and hire more artists and doctors, some of whom are currently consultants.

A big part of Sketchy’s magic, and effectiveness, comes from the fact that all of its founding team have experience in medicine.

The company began in 2013 when then-med students Saud Siddiqui and Andrew Berg were in desperate need of a better study solution for microbiology. To liven up their studying, Berg and Siddiqui began weaving characters into stories to try to memorize concepts — and after a few good test scores, they started creating stories for their classmates.

“Neither Saud or I were artists, so they were pretty bad,” Berg said. As demand continued, the duo put their scraggly sketches on YouTube. Eventually, Siddiqui and Berg roped in classmate Bryan Lemieux, a good artist, to tell the stories with them. Eventually Bryan brought on his twin brother, Aaron, and the founding team was born.

Fast-forward to today: Siddiqui and Berg have finished their residencies in emergency medicine, while the Lemieux brothers chose to leave medicine. All have moved full-time to the company after trying to balance both jobs. Still, the knowledge from working in the field continues to be useful.

The startup’s name has evolved: born as SketchyMedical, it has since rebranded to just Sketchy. While the team chose the name to nod toward its focus on art, the name also has negative connotations. Expect a rebrand in the future.

Despite this, the company claims that it is used by a third of med students in the United States. The majority of its revenues come from 12-month subscriptions for students looking to prep for med school exams like Step 1, and Step 2.

While B2C is a promising business model for many reasons (it’s always easier to convince a human to pay instead of a entire, red-tape-bound institution), the company has also posted promising B2B growth. So far, 20% of its revenue comes from direct contracts it has with medical schools. The founders said that they will pursue both growth methods for now, but based on the price of med school (and student debt crisis), it would be great to see them grow through school contracts so students don’t have to face the brunt of costs.

Reach Capital’s Jennifer Carolan, an investor in Sketchy, said that Sketchy’s product market fit with med students is a “strong signal that their content is worth it.” Even with competitors such as Picorize and Medcomic, she’s confident that Sketchy’s product is defensible and can expand into new verticals. Part of the reason the firm approached Sketchy to invest in them is because of low customer acquisition costs, Carolan notes in a blog post.

That said, unlike most edtech companies, which have enjoyed surging new user demand thanks to remote learning, Sketchy didn’t have a huge COVID-19 boom.

“We weren’t one of those people that hadn’t found product market fit and then exploded after COVID,” said Berg. “We’ve always been there and been growing.”

So the real trigger for today’s fundraise wasn’t COVID-19 momentum, but instead, a push to capitalize its sustained growth into more digital curriculum verticals.

Long-term, think of Sketchy as joining a chorus of startups, including Top Hat Jr and Newsela, that want to replace textbook publishers. In a remote world, live, moving content is more rapidly losing value, and upstarts are trying to replace them with more effective and engaging content.

“One of the challenges is just to make sure we don’t go too fast,” Siddiqui said. “We want to keep that degree of quality we’ve maintained for so many years, and do it at scale.”

Editor’s note: The original version of this story stated that Sketchy had raised $32 million. This is incorrect. The company raised $30 million along with a secondary transaction from Reach Capital.