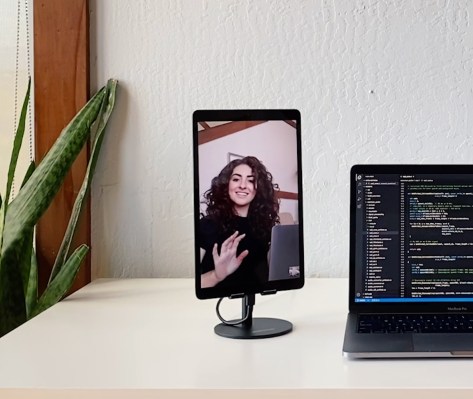 Those forced to acclimate to remote work understand what a pain it can be. Sure, there are certainly benefits to not having to commute into work each day, but among other things, you lose a lot when you eliminate human interaction. Apps like Zoom and Slack have their place, certainly, but none does a particularly good job replicating the in-person work environment.

Formed by three ex-Palantir employees and a former Googler, Y Combinator-backed Sidekick has impeccable timing. The startup (which is fittingly remotely split between the Bay Area and New York), has built a hardware solution designed to bring an always-on video connection to the desk of remote workers (which, as it so happens, is most of us non-essentials, these days).

Development of the project began in earnest when the startup set out interviewing 100+ teams to discuss the challenges of remote work.

“We reflected deeply on what’s needed to enable these organic conversations. We came from a background as ICs and managers working on distributed teams at Palantir and Google, where we had all the shiniest collaboration tools at our disposal — Slack, Zoom, Notion, Tandem,” Sidekick writes in a recent blog post. “Despite this entire suite of shiny tools, we would still fly out for a week every month from our home office in NYC to join our remote halves in London — over 20 hours in travel and thousands of dollars in expenses every month.”

Sidekick contends that teleconferencing apps like Zoom create too much friction between the user and creating a kind of virtual open office. The teams the company spoke with suggested that a dedicated hardware device was the way to go here, so Sidekick repurposed an OEMed tablet, forking Android to their purpose. The company’s roadmap involves a proprietary hardware device sporting key aspects like a depth sensor.

For now, however, it’s selling its version of the existing consumer tablet through a hardware-as-a-service plan. Customers will be charged $50 per month, per device.

“They should only pay us as long as we’re delivering that value, and stop paying us if we’re not,” Sidekick told TechCrunch when asked about the subscription method. “We see the hardware as the best way of delivering that, but we believe that what’s most fair is for our users to pay for exactly the continued value we provide — not the hardware itself.”

There’s a physical button that puts the system to sleep, but when it’s on, it’s on. Users can’t turn the camera off and remain in stealth, either. Personally, I’d be hesitant to have an always-on camera sitting in my living room (small, one bedroom New York apartment) with a direct line to my co-workers. One of the things you risk working from home is getting a little too…comfortable, if you will. After a few hours of not interacting, it’s easy to forget that there’s a camera trained on you.

The startup tells TechCrunch that the system isn’t for everyone. “Sidekick is meant for fast-moving teams, often forced into remote work, that truly need to be in the same room to make progress,” the company explains. “Teams like startup founding teams, product leadership, executives/chief-of-staffs and sales.”

There’s probably something to be said for the executives themselves who are looking for an easier way to keep tabs on employees now that they can’t just swing by their cubicle. Sidekick has a purchasing option “for teams of all sizes and setups,” though hopefully the product remains more about collaboration and less about monitoring for most teams.