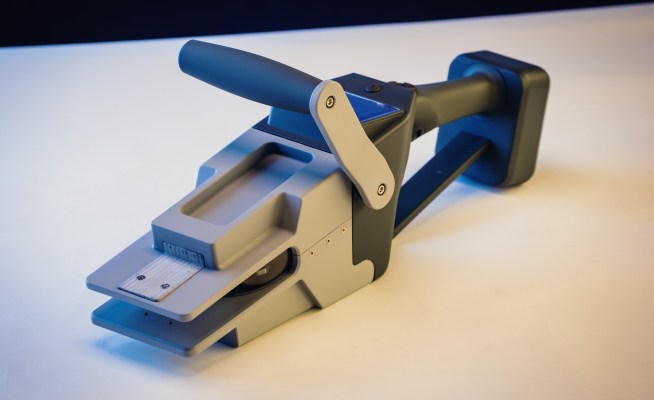 As much as we’d all like to believe that our houses are built with perfectly square angles and other highly regular measurements, that’s rarely the case — which makes remodeling complex and tedious. ShapeMeasure hopes to alleviate that pain with a device that automatically measures a space and a robotic mill that cuts the required lumber precisely to size, shortening and easing the process by huge amounts.

Founder Ben Blumer, who was exposed to the art of building and repair early by his father, a general contractor, had a brainwave that became the company during some renovations of his own.

“I was shocked to see our flooring installer, who had 10 years of experience, and was excellent at what he did, take over an hour to install a single stair,” Blumer said. “I started thinking, ‘a little bit of technology could go a long way here.’ ”

Finding himself at the time free to work on such a project, he recruited a former general contractor friend and applied to HAX, which soon shipped them off to Shenzhen to pursue their idea.

The main issue is stairs: they’re tricky, and especially in older homes can be pretty off-kilter. So although you know each stair is about 35 inches wide, it might be 35 and 3/64 inches, while the next one could be 34 and 61/64. Likewise, the angles might be ever so slightly off the 90 degrees or whatever they theoretically should be. Painstakingly measuring every single stair and manually cutting wood to those many slightly different dimensions is extremely time-consuming. The tool ShapeMeasure built makes it literally a push-button affair.

The device they settled on is essentially a super-precise lidar that measures around itself in wide arc, and the exact details of which comprise part of the company’s secret sauce. This gives the precise dimensions and attachment angles of the area around it, in the first intended use case a stair. The design, helped along by HAX’s Noel Joyce, looks a bit like a giant Dust Buster by way of the original “Alien.” 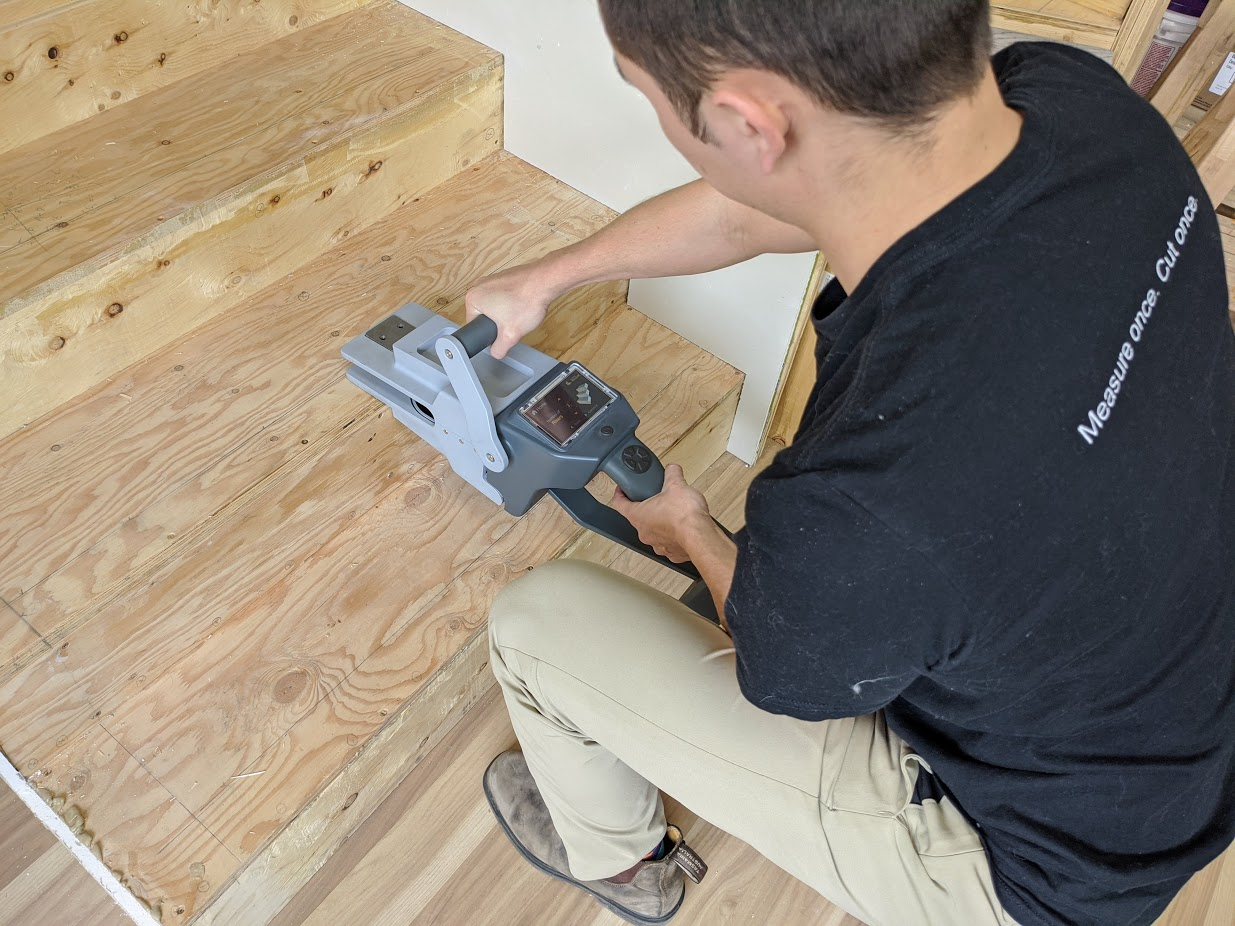 Obviously his shirt contradicts my headline, but if you think about the cutting as an automated process rather than something a person has to do, mine makes sense.

“We were working with Noel Joyce, HAX’s lead industrial designer. We wanted a product that looked and felt like a tool. We figured, if you’re trying to convince contractors to try something new, it should feel familiar,” Blumer said. “We spent hundreds of hours sourcing parts and re-engineering our scanning mechanism so that it could fit into Noel’s beautiful form factor. Turns out, contractors don’t care what it looks like. They liked the design, but were way more excited for the functionality.”

Once the shapes are scanned in and checked, that information can be beamed off to ShapeMeasure’s other device, a robotic lumber sizing system that cuts wood into the exact size and shape necessary to fit together as stairs. Of course, the contractor still has to bring them to the location and attach them by whatever means they see fit, but what was once a process with perhaps hundreds of steps has been simplified by an order of magnitude. 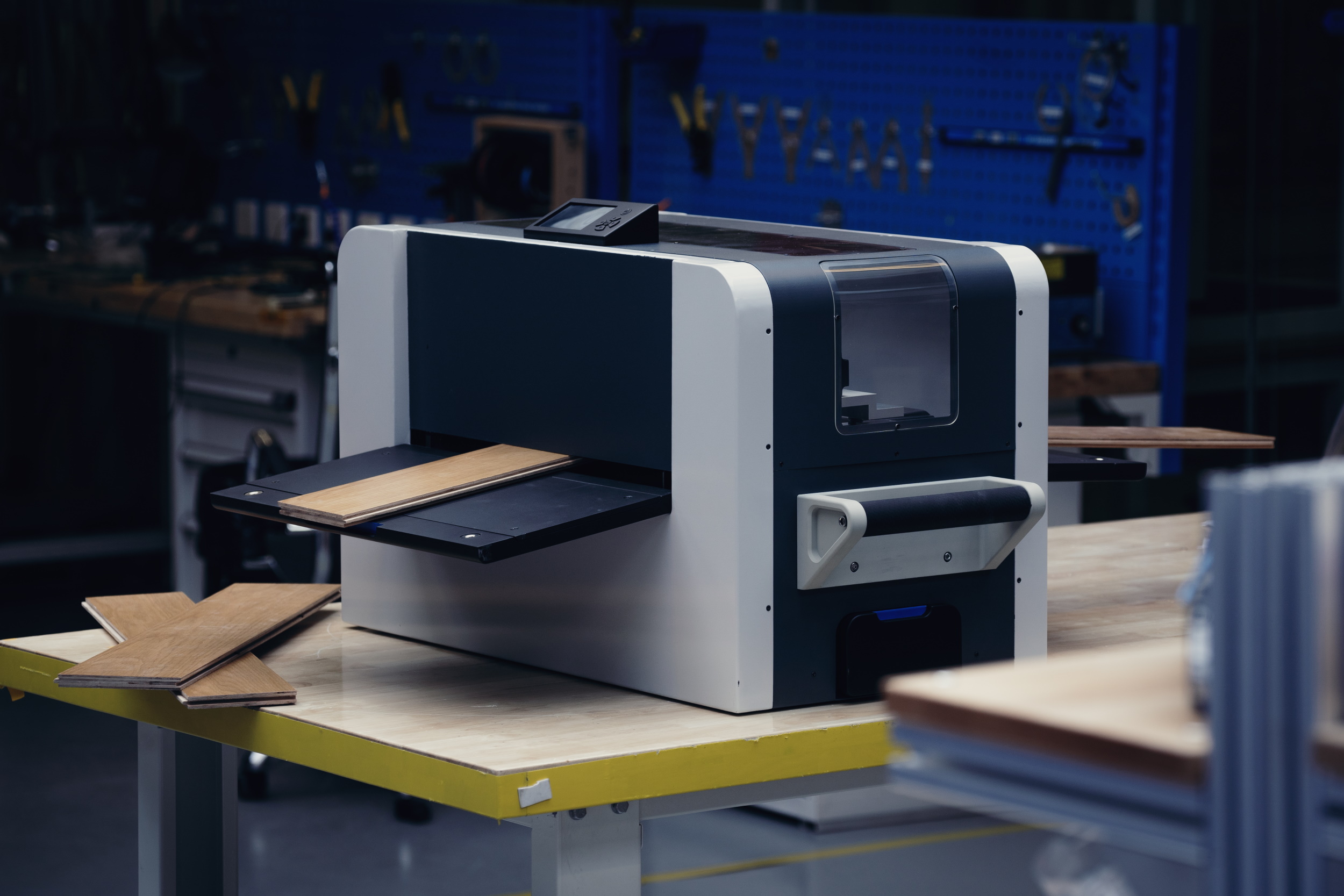 The machine is similar to other lumber-cutting devices, but simpler and easier to operate.

“There are lots of automatic cutting systems — often big, heavy, expensive and operated by professional CNC technicians. To cut flooring on a machine like that involves setting up jigs, clamping and reclamping each board, and generating custom gcode for each stair we cut,” Blumer said. They can be several times more costly and difficult to employ. “The cutting solution we’re building is compact, requires no clamping, and can be operated with just a few hours of training.”

It’s not just about length and width, either — molding and other flourishes on the stairs can make complex cuts necessary that would be impractical or at the very least extremely time-consuming to attempt manually.

Examples of complex cuts made by the ShapeMeasure machine.

The result is that the installation process from start to finish is about four times faster, they determined. If this seems a bit optimistic, know that it isn’t just armchair theorizing — they were careful to back up these numbers from the start.

“We take our speedup data really seriously,” said Blumer. “This is our top metric! One of the first purchases I made for the company was a dozen stopwatches. We’ve done installations in the ShapeMeasure lab and on real, messy construction sites — filming, timing and logging every moment.”

Interestingly, the precut lumber made other improvements possible — the team designed a bucket to accommodate the increased rate at which the installer uses glue and other parts. It’s a bit like if you improved painting speed so much that your new bottleneck was mixing and pouring the paint into roller trays fast enough.

Currently the company is working on establishing standard practices and packaging so that a ShapeMeasure “microfactory” can be set up easily anywhere in the country on short notice. And they’re “considering” raising money before then to accelerate the process. Blumer built the prototype with his own money and they pulled in a bit from HAX and then a small pre-seed round to get things started.

With luck and a bit of elbow grease, ShapeMeasure could turn out to be a real differentiator in the contractor space — every hour counts, as does every dollar in an estimate.