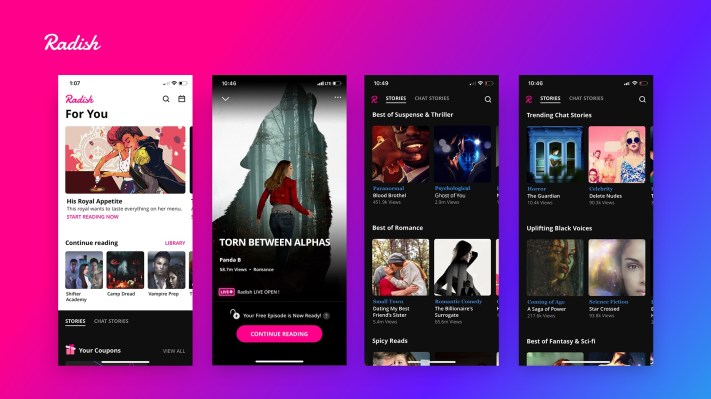 Radish is announcing that it has raised $63.2 million in new funding.

Breaking up book-length stories into smaller chapters that are released over days or weeks is an idea that was popularized in the 19th century, and startups have been trying to revive it for at least the past decade. Still, this round represents a major step up in funding, not just for Radish (which only raised around $5 million previously), but also compared to other startups in a relatively nascent market. (Digital fiction startup Wattpad is the notable exception.)

When I first wrote about Radish at the beginning of 2017, the startup was focused on user-generated content. Last year, however, the company launched the Radish Originals program, where Radish is able to produce more content using teams of writers lead by a “showrunner,” and where the startup owns the resulting intellectual property.

“Instead of becoming YouTube or Wattpad for serial fiction, we want to be more like Netflix and create our own originals,” founder and CEO Seungyoon Lee told me. “I got a lot of inspiration from platforms in Korea, China and Japan, where serial fiction is huge and established on mobile.”

One of the ideas Radish took from the Asian markets is rapidly updating its stories. For example, its most popular title, “Torn Between Alphas” (a romance story with werewolves) has released 10 seasons in less than a year, with each season consisting of more than 50 chapters — later seasons have more than 100 chapters — that are released multiple times a day.

While Radish borrowed the writing room model from TV — and hired Emmy-winning TV writers, particularly those with a background in soap opera — Lee said it’s also taken inspiration from gaming. For one thing, it relies on micro-payments to make money, with users buying coins that allow them to unlock later chapters of a story (chapters usually cost 20 or 30 cents, and more chapters get moved out from behind the paywall over time). In addition, the company can allow reader taste to determine the direction of stories by A/B testing different versions of the same chapter.

Lee pointed to the fall of 2019 as Radish’s “inflection point,” where the model really started to work. Now, the company says its most popular story has made more than $4 million and has received more than 50 million “reads.” Radish stories are mostly in the genres of romance, paranormal/sci-fi, LGBTQ, young adult, horror, mystery and thriller, and Lee said the audience is largely female and based in the United States.

By raising a big round led by SoftBank Ventures Asia (the early stage investment arm of troubled SoftBank Group) and Kakao Pages (which publishes webtoons, web novels and more, and is part of Korean internet giant Kakao), Lee said he can take advantage of their expertise in the Asian market to grow Radish’s audience in the U.S. That will mean accelerating content production in the hopes of creating more hit titles, and also spending more on performance marketing.

“With its own fast-paced original content production, Radish is best positioned to become a leading player in the global online fiction market,” said SoftBank Ventures Asia CEO JP Lee in a statement. “Radish has proven that its serialized novel platform can change the way people consume online content, and we are excited to support the company’s continued disruption in the mobile fiction space. Leveraging our global SoftBank ecosystem, we hope to support and accelerate Radish’s expansion across different regions worldwide.”