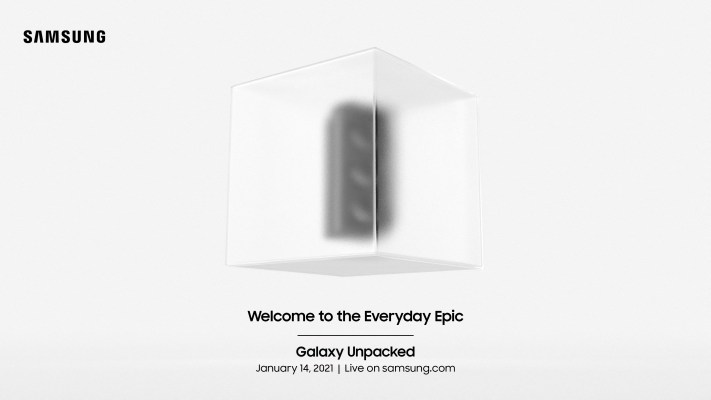 Stop me if you’ve heard this one before. Samsung’s next flagship is set to debut January 14. The company just confirmed earlier rumors surrounding the date for its next Unpacked event (virtually, of course). This one sports the name, “Welcome to the Everyday Epic.”

“Over the past year, mobile technology has taken center stage in everyday life as people are working remotely and spending more time at home,” the company writes. “The accelerated transition to a mobile-first world brings with it the need for devices that can transform everyday life into an extraordinary experience.”

The event’s timing is an interesting artifact of 2021’s wacky show scheduling, with the COVID-19 pandemic still very much being front of mind. Past Unpackeds were generally timed around Mobile World Congress. That show has been delayed until the summer, however, in hopes of returning to an in-person event. So Samsung has opted to kickstart sales a month or so earlier this year.

In fact, the event is a mere days after CES. Gone are the days a gadget journalist could take a few days to decompress after the year’s biggest hardware show. It also, perhaps, doesn’t bode well for Samsung’s announcements during CES itself (though the electronics giant has more than enough divisions to keep its presence at the show interesting).

Another odd change this year is the fact that you can already reserve the S21, sight unseen. There’s little doubt it will be a solid phone, though there are plenty of questions around how the company will up the ante in the era of flagging smartphone sales. The leaks so far have been kind of underwhelming, though Samsung’s usually got a couple of fun surprises up its sleeve.

We’ve already seen enough of the Galaxy Buds Pro that they don’t qualify as a surprise, exactly. But the company has a solid enough track record with earbuds that there’s reason to be excited. The AirPods Pro competitors are are said to be priced at a reasonable $199.