Reddit has raised a new funding round, totalling $250 million. This is the company’s Series E round of financing, and it comes hot on the heels of renewed public attention on the site that has dubbed itself ‘the front page of the Internet,’ owing to the role the subreddit r/WallStreetBets played in the recent meteoric rise (and subsequent steep fall) of the value of GameStop stock. Reddit also ran a 5-second Super Bowl ad on Sunday, consisting of. a single static image that looked like a standard post on the network itself.

This is Reddit’s 16th year of operation, and the company has raised around $800 million to date, including a Tencent-led $300 million Series D in February, 2019. Today’s round including financing from “existing and new investors,” Reddit noted in a blog post in which it announced the funding. In the post, Reddit notes that the company felt “now was the right opportunity to make strategic investments in Reddit including video, advertising, consumer products and expanding into international markets.” 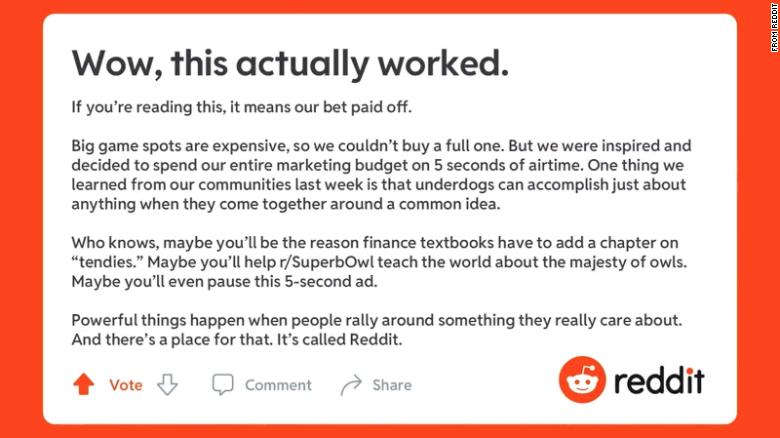 It’s unclear how the round came together exactly, but given the network’s time in the spotlight over the past few weeks, culminating in yesterday’s very brief, but also very memorable and high-profile ad, it seems likely it was at least finalized fast in order to help the company make the most of its time in the spotlight. In terms of what kind of specific moves Reddit could make with its new cash on hand, the blog post also namecheck its acquisition late last year of short video sharing platform Dubsmash, and announced plans to double its team over the course of this year with new hires.

Reddit’s long history has also included some significant tumult, and efforts to clean up its act in order to present a better face to advertisers, and to potential new community members. The network still struggles with balancing its commitments to fostering a home for a range of communities with the potential for hate speech and discrimination to take root within some of these, and it was also in the news earlier this year for finally banning controversial subreddit r/donaldtrump following “repeat´d policy violations” surrounding the attempted insurrection a the U.S. Capitol by a mob of domestic terrorists.