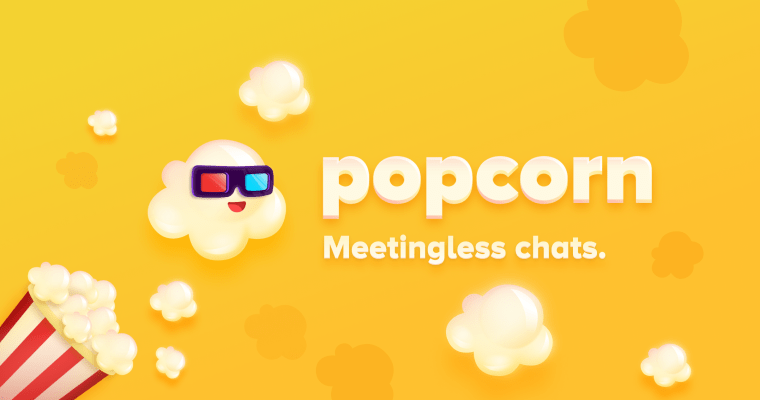 A new startup called Popcorn wants to make work communication more fun and personal by offering a way for users to record short video messages, or “pops,” that can be used for any number of purposes in place of longer emails, texts, Slack messages, or Zoom calls. While there are plenty of other places to record short-form video these days, most of these exist in the social media space which isn’t appropriate for a work environment. Nor does it make sense to send a video you’ve recorded on your phone as an email attachment, when you really just want to check in with a colleague or say hello.

Popcorn, on the other hand, lets you create the short video and then send a URL to that video anywhere you would want add a personal touch to your message.

For example, you could use Popcorn in business networking scenario, where you’re trying to connect with someone in your industry for the first time — aka “cold outreach.” Instead of just blasting them a message on LinkedIn, you could also paste in the Popcorn URL to introduce yourself in a more natural, friendly fashion. You could also use Popcorn with your team at work for things like daily check-ins, sharing progress on an ongoing project, or to greet new hires, among other things.

Videos themselves can be up to 60 seconds in length — a time limit designed to keep Popcorn users from rambling. Users can also opt to record audio only if they don’t want to appear on video. And you can increase the playback speed if you’re in a hurry. Users who want to receive “pops” could also advertise their “popcode” (e.g. try mine at U8696).

The idea to bring short-form video to the workplace comes from Popcorn co-founder and CEO Justin Spraggins, whose background is in building consumer apps. One of his first apps to gain traction back in 2014 was a Tinder-meets-Instagram experience called Looksee that allowed users to connect around shared photos. A couple years later, he co-founded a social calling app called Unmute, a Clubhouse precursor of sorts. He then went on to co-found 9 Count, a consumer app development shop which launched more social apps like BFF (previously Wink) and Juju.

9 Count’s lead engineer, Ben Hochberg, is now also a co-founder on Popcorn (or rather, Snack Break, Inc. as the legal entity is called). They began their work on Popcorn in 2020, just after the start of the Covid-19 pandemic. But the rapid shift to remote work that’s come in the days that followed could now help Popcorn gain traction among distributed teams. Today’s remote workers may never again return to in-person meetings at the office, but they’re also are growing tired of long days stuck in Zoom meetings.

With Popcorn, the goal is to make work communication fun, personal and bite-sized, Spraggins says. “[We want to] bring all the stuff we’re really passionate about in consumer social into work, which I think is really important for us now,” he explains.

“You work with these people, but how do you — without scheduling a Zoom — how do you bring the ‘human’ to it?,” Spraggins says. “I’m really excited about making work products feel more social, more like Snapchat than utility tools.”

There is a lot Popcorn would still need to figure out to truly make a business-oriented social app work, including adding enhanced security, limiting spam, offering some sort of reporting flow for bad actors, and more. It will also eventually need to land on a successful revenue model.

Currently, Popcorn is a free download on iPhone, iPad and Mac, and offers a Slack integration so you can send video messages to co-workers directly in the communication software you already use to catch up and stay in touch. The app today is fairly simple but the company plans to enhance its short videos over time using AR frames that let users showcase their personalities.

The startup raised a $400,000 pre-seed round from General Catalyst (Nico Bonatsos) and Dream Machine (Alexia Bonatsos, previously editor-in-chief at TechCrunch.) Spraggins says the company will be looking to raise a seed round in the fall to help with hires, including in the AR space.