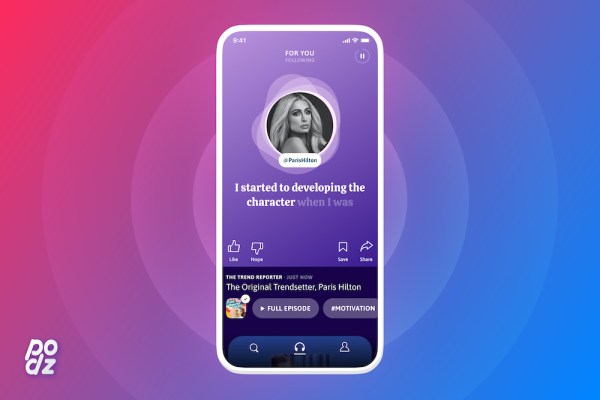 Podz is the latest startup trying to solve the problem of podcast discovery, with backing from investors like M13, Katie Couric and Paris Hilton.

“Even though podcasts have gained a lot of momentum — there are 100 million folks in the U.S. who listen to podcasts — we still haven’t seen that crossover behavior, where audio becomes a part of everyday lives,” CEO Doug Imbruce argued. “We think that’s because the experience of discovering and consuming podcasts is ancient. It literally feels like browsing the web in 1997.”

Imbruce’s name may be familiar to longtime TechCrunch readers, as he was previously the chief executive at Qwiki, which won the Startup Battlefield at TechCrunch Disrupt in 2010 (Cloudflare was one of the runners up), then acquired by Yahoo a few years later.

By Imbruce’s own admission, Qwiki never quite lived up to his hopes for remaking online media consumption, but he said that its vision of “machine-created media” offered “a taste of the future” — a future that he’s hoping to help usher in with Podz.

The problem that the startup aims to solve is pretty straightforward. Since podcasts often consist of 30 or 60 minutes or more of spoken-word audio, they’re difficult to browse, and when you discover new ones, it’s usually through word-of-mouth recommendations or clunky search tools.

While tools like Headliner makes it easier for podcasters to promote their content with short clips on social media, Podz automates that creation process and makes those clips the centerpiece of the listening experience.

In the Podz mobile app, users browse what the startup calls an “the first audio newsfeed,” consisting of 60-second podcast clips. These clips are designed to highlight the best moment from each podcast, making it easier to sample a much wider array of titles than the ones you currently subscribe to. Each clip should stand on its own, but if you want to dive deeper, you can save the full episode for listening later.

These clips are created automatically, and Imbruce said “the beating heart of the Podz platform” is a machine learning model that “identifies the most engaging parts of podcasts.” The model was trained on more than 100,000 hours of audio, in consultation with journalists and audio editors.

For example, here are the clips chosen from the three most recent episodes of the Original Content podcast — our reviews of “Soul,” “The White Tiger” and “Bridgerton.” Each clip seems reasonably self-contained, and although I was a little dismayed to discover that they all focused on me (rather than my more eloquent co-hosts), a Podz spokesperson explained that’s because the app focuses on “the highest density speakers.”

The Podz newsfeed is personalized to your interests (and, if you choose, it can also draw on the podcasts you follow in Apple Podcasts and the accounts you follow on Twitter). Imbruce said it should become smarter over time as it observes listener behavior.

He added that the team is hoping to introduce more creative and monetization tools for podcasters over time: “We are really hopeful that we can both increase amount of audio being created by 10x and increase the monetization of audio by 100x.”

“We are living in a golden age of audio, but only 1% of podcasts reach an audience of 5,000+,” M13 General Partner Latif Peracha told me via email. “Podz plans to grow the audience for existing audio but the real focus will be on growing new audio by leveraging their creator tools. Already, the average podcast listener subscribes to seven podcasts but follows almost 30 on Podz. Early signals make us optimistic the team can build a transformative product in the category.”