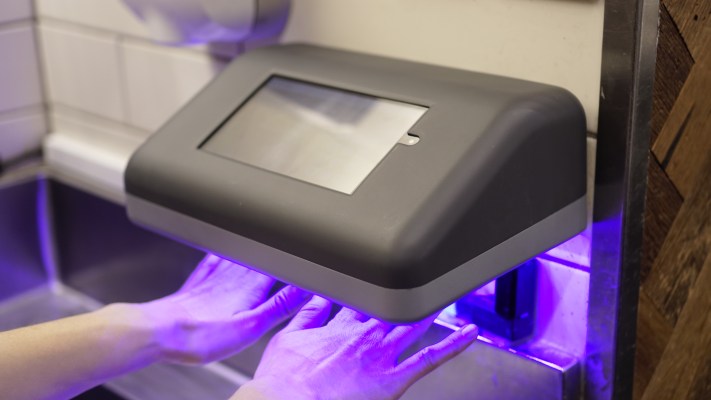 The novel coronavirus disease has reminded millions that handwashing is a great way to avoid preventable diseases. Christine Schindler, the CEO and co-founder of PathSpot, has been preparing for the past three months for the past three years.

“I’ve been obsessed with handwashing,” Schindler said, who has a background in biomedical engineering and public health. Combine that obsession with her experience building low-cost resources in hospitals atop Mount Kilimanjaro in Tanzania and PathSpot was born.

PathSpot sells handwashing hygiene machinery to any place “where food is served, handled or stored,” according to Schindler. Its customers range from restaurants and packing facilities to cafeterias and farms.

PathSpot sells a scanner that mounts on a wall next to handwashing sinks. An individual can come to the hand hygiene machine, place their hands in it and get a green or red light depending on if their hands are clean.

Technology-wise, the company does not compete with Purell, but instead fact checks it to an extent. PathSpot uses visible light fluorescent spectral imaging to identify specific contaminants on someone’s hand that can carry bacteria and potentially make them sick. It shines a specific wavelength onto the hand, takes an image, and sends that image through a series of filters and algorithms to identify if unwanted contaminants are present.

Schindler says that the scanner takes less than two seconds to do a whole scan of someone’s hands.

It is looking for the most common transmission vectors, like fecal matter, for food-borne illnesses, like e.coli.

“It’s not identifying if your hand is washed or not in terms of whether it has water droplets,” she said. “Because most of the time people fail a wash, they wash their hands, but they didn’t wash for the full 20 seconds or didn’t use soap in the proper areas.”

But would it save someone from the coronavirus? Schindler says that the coronavirus is transmitted predominantly through respiratory droplets and fecal matter, as of now. PathSpot covers the latter, she said.

However, according to the CDC, it is still unclear if the virus found in feces can cause COVID-19. There has not been any confirmed report of the virus spreading from feces to a person, and scientists believe the risk is low.

So PathSpot can’t specifically detect the coronavirus right now, but instead can detect every-day and potentially infectious contaminants. Overall sentiment around sanitation has increased since COVID-19 began in the United States. Schindler said that usage of the machine has gone up 500% across their hundreds of customer

PathSpot’s second product is a live dashboard to help restaurants better manage and train their staff around sanitation. “We can tell if the hot spots were right under their right pinky fingernail, or underneath their jewelry,” she said. “We can see where all the hot spots are.”

Efficacy wise, a study shows that the scanner was found to have sensitivity and specificity of 100% and 99%, respectively, during nominal use within a food service environment. Restaurants that use PathSpot see handwashing rates increase by more than 150% in one month of using the product, PathSpot said.

PathSpot charges a monthly subscription fee that includes the device itself and the data dashboard, as well as consultancy from its team to the customer regarding actionable insights. The pricing ranges based on size and number of devices, but on average it starts at $175 a month, Schindler said.

Today, the startup announced it has raised $6.5 million in a Series A round led by Valor Siren Ventures, which is a fund formed by Starbucks and Valor Equity Partners . Existing investors FIKA Ventures and Walden Venture Capital also participated.

The new financing brings PathSpot’s total known venture capital to $10.5 million. Richard Tait, a partner at VSV, will take a seat on PathSpot’s board of directors.

PathSpot is raising during a time when its product is more palatable to the general public. Yet its main customer, restaurants, are reeling from the pandemic and are barely able to complete payroll for their entire staff. PathSpot, therefore, targets the next generation of restaurants that rise after the pandemic — the ones that have no choice but to be digitally enabled and adopt technology to keep sanitation in check.