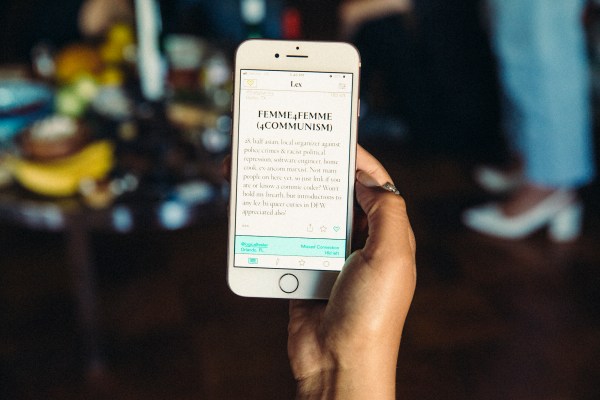 Lex, a new social app for women, trans, genderqueer and non-binary people offering the ability to post personal ads, has today announced the close of a $1.5 million seed funding round.

Short for Lexicon, Lex was founded by Kell Rakowski, who originally rose to some prominence after starting an Instagram account called Herstory that curated cool lesbian content from the 1800s to the 90s, including the Personals Ads found in the backs of lesbian erotica magazines from the 80s.

“[The personal ads] were just so hot, and so cool,” said Rakowski. “They were really witty and the women were super direct, and were able to express themselves in a really clear and inspiring way.”

Rakowski had an idea: What if the queer personal ad came back? She asked her Herstory followers if they’d want to post their own personals and the premise quickly took off, with hundreds of personal ads flooding in over the two-day period each month when submissions were open.

The popularity of the format led to yet another idea. Rakowski decided to set up a dating/social app that was focused on these text-based personal ads for women, trans, genderqueer and non-binary people.

Lex, which launched on the App Store in November 2019, is an MVP that does just that.

Users can set up their own profile and post personals, as well as browse the feed of other personals and like the ones that pique their interest. While the personals themselves can be rather graphic, the app is not. There are currently no pictures on Lex, with the caveat that users can link out to their Instagram account if they so choose.

Rather, users can browse through the text-based personals and like them, or message the author of the personal to start up a conversation.

Moreover, unlike traditional dating apps, there is no mutuality required to start a private conversation. In other words, people don’t have to be “matched” to chat. Just like the personal ads of yesteryear, the author sends out a call for responses and the responses flow in.

It’s still early days for the app, but Rakowski has plans to set up the ability to post pictures to profiles (which would not be included in the feed, but would be clickable should the text intrigue you), as well as adding group chat to the app for folks looking to build community.

Lex also has plans to eventually introduce a freemium subscription model to the app, giving users extended functionality for a monthly price. For now, however, the focus is on growth and building out the app.

With the new funding, Lex is looking to hire underrepresented talent in tech for product and engineering positions. The team, comprised of five people, is currently 80% cis women and 20% cis men, with 80% identifying as LGBTQ. Three of the five team members are people of color.

Lex is being aggressive about this hiring sprint, posting its open positions on the app and on Instagram.

“I’ve gotten so many incredible queer tech talent applying for positions at Lex,” said Rakowski. “It’s so inspiring and also emotional. People are writing the most beautiful emails about how much they like Lex. Hiring is 100% our main focus.”