Netflix today is launching a new feature that aims to bring more offline content to users who opt-in automatic downloads. With “Downloads for You” enabled, the Netflix app will download recommended TV shows and movies to your mobile device based on your tastes, as determined by your Netflix watch history.

After turning on the feature for the first time, you’ll be able to select the amount of storage space you want to dedicate to saving these recommended downloads on your device: either 1GB, 3GB or 5GB. The downloads will then take place when you’re connected to a Wi-Fi network, and will contain a mix of recommendations that Netflix believes you’ll like. Typically, the app will download the first few episodes of a TV show — enough to get you started.

You can also cast the downloaded content to a nearby TV, where it will stream directly from your phone.

After you’ve watched the episodes or movies, you can delete them from the device to free up more storage space for the next time you’re connected to Wi-Fi.

Netflix notes its full catalog is available for download, not just its own original content. However, there will be some titles with download limitations due to licensing restrictions. 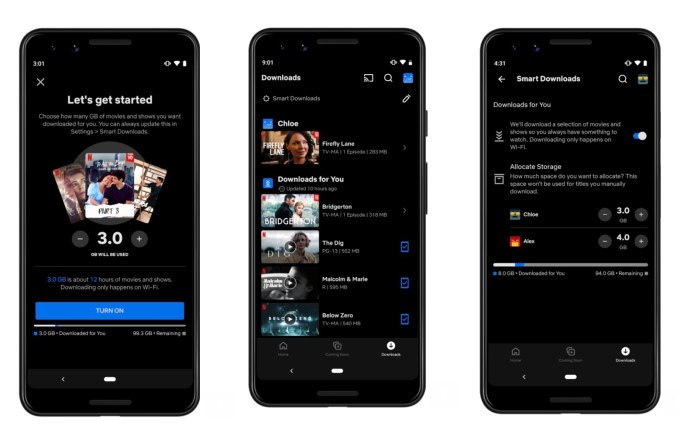 The feature is an addition, not a replacement for Netflix’s existing offline access feature known as Smart Downloads. First launched in 2018 before becoming globally available, Smart Downloads allows users to pick which shows or movies they want to save for offline viewing.

Netflix says it began testing Downloads for You in late 2020, but is today making the feature available to all users worldwide, initially on Android. A version for iOS is in the works and will arrive later this year.

Offline downloads can make sense for those who are traveling — for example, by plane or underground train, where internet access is not a given. But it also makes sense for users in emerging markets, where access to a reliable cellular connection or bandwidth can be a concern.

During tests, Netflix notes it saw high usage of the feature in the U.S. But it considers the emerging market use case — where Android devices are more heavily used and connections are often unreliable — to be of particular importance. This is especially true for countries like India and Brazil, and elsewhere in the Asia-Pacific region.

“We’re excited to introduce Downloads for You. People who choose this new feature will have shows or movies automatically downloaded to their devices, with recommendations based on their tastes,” said Patrick Flemming, Netflix’s director of Product Innovation, in a statement. “We want to make discovering your next new favorite series or film even easier, whether you’re connected or not.”