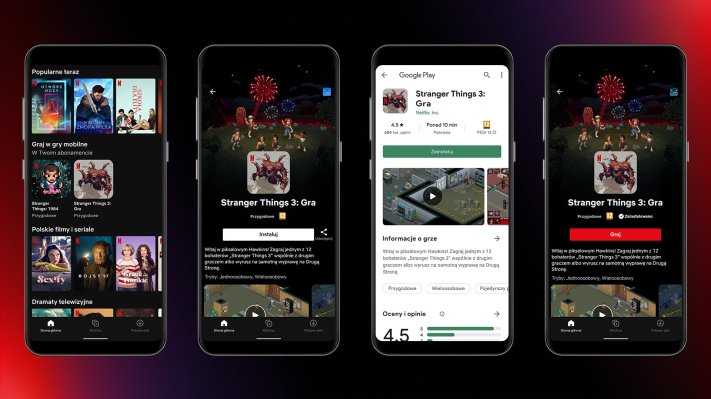 Netflix today announced it will begin testing mobile games inside its Android app for its members in Poland. At launch, paying subscribers will be able to try out two games, “Stranger Things: 1984” and “Stranger Things 3” — titles that have been previously available on the Apple App Store, Google Play and, in the case of the newer release, on other platforms, including desktop and consoles. While the games are offered to subscribers from within the Netflix mobile app’s center tab, users will still be directed to the Google Play Store to install the game on their devices.

To then play, members will need to confirm their Netflix credentials.

Members can later return to the game at any time by clicking “Play” on the game’s page from inside the Netflix app or by launching it directly from their mobile device.

“It’s still very, very early days and we will be working hard to deliver the best possible experience in the months ahead with our no ads, no in-app purchases approach to gaming,” a Netflix spokesperson said about the launch.

Today members in Poland can try Netflix mobile gaming on Android with two games, Stranger Things: 1984 and Stranger Things 3. It’s very, very early days and we’ve got a lot of work to do in the months ahead, but this is the first step. https://t.co/yOl44PGY0r

The company has been expanding its investment in gaming for years, seeing the potential for a broader entertainment universe that ties in to its most popular shows. At the E3 gaming conference back in 2019, Netflix detailed a series of gaming integrations across popular platforms like Roblox and Fortnite and its plans to bring new “Stranger Things” games to the market.

On mobile, Netflix has been working with the Allen, Texas-based game studio BonusXP, whose first game for Netflix, “Stranger Things: The Game,” has now been renamed “Stranger Things: 1984” to better differentiate it from others. While that game takes place after season 1 and before season 2, in the “Stranger Things” timeline, the follow-up title, “Stranger Things 3,” is a playable version of the third season of the Netflix series. (So watch out for spoilers!)

Netflix declined to share how popular the games had been in terms of users or installs, while they were publicly available on the app stores.

With the launch of the test in Poland, Netflix says users will need to have a membership to download the titles as they’re now exclusively available to subscribers. However, existing users who already downloaded the game from Google Play in the past will not be impacted. They will be able to play the game as usual or even re-download it from their account library if they used to have it installed. But new players will only be able to get the game from the Netflix app.

The test aims to better understand how mobile gaming will resonate with Netflix members and determine what other improvements Netflix may need to make to the overall functionality, the company said. It chose Poland as the initial test market because it has an active mobile gaming audience, which made it seem like a good fit for this early feedback.

Netflix couldn’t say when it would broaden this test to other countries, beyond “the coming months.”

The streamer recently announced during its second-quarter earnings that it would add mobile games to its offerings, noting that it views gaming as “another new content category” for its business, similar to its “expansion into original films, animation and unscripted TV.”

The news followed what had been a sharp slowdown in new customers after the pandemic-fueled boost to streaming. In North America, Netflix in Q2 lost a sizable 430,000 subscribers — its third-ever quarterly decline in a decade. It also issued weaker guidance for the upcoming quarter, forecasting the addition of 3.5 million subscribers when analysts had been looking for 5.9 million. But Netflix downplayed the threat of competition on its slowing growth, instead blaming a lighter content slate, in part due to COVID-related production delays.