A new study from Pew Research Center, released today, digs into the different ways that U.S. Democrats and Republicans use Twitter. Based on data collected between Nov. 11, 2019 and Sept. 14, 2020, the study finds that members of both parties tweet fairly infrequently, but a majority of Twitter’s most prolific users tend to swing left.

The report updates Pew’s 2019 study with similar findings. At that time, Pew found that 10% of U.S. adults on Twitter were responsible for 80% of all tweets from U.S. adults.

Today, those figures have changed. During the study period, the most active 10% of users produced 92% of all tweets by U.S. adults.

And of these highly active users, 69% identify as Democrats or Democratic-leaning independents.

In addition, the 10% most active Democrats typically produce roughly twice the number of tweets per month (157) compared with the most active Republicans (79). 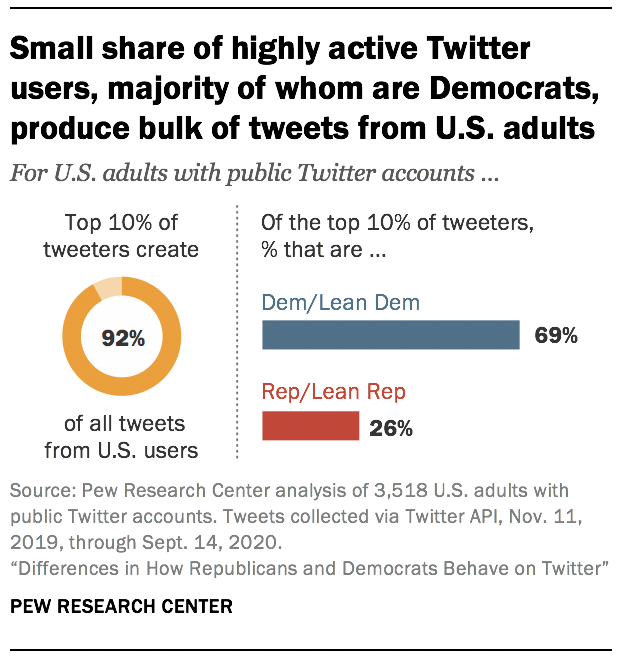 The typical adult also has very few followers, with the median
Democrat having 32 followers while the median Republican has 21. Democrats, however, tend to follow more accounts than Republicans do, at 126 vs. 71, respectively. 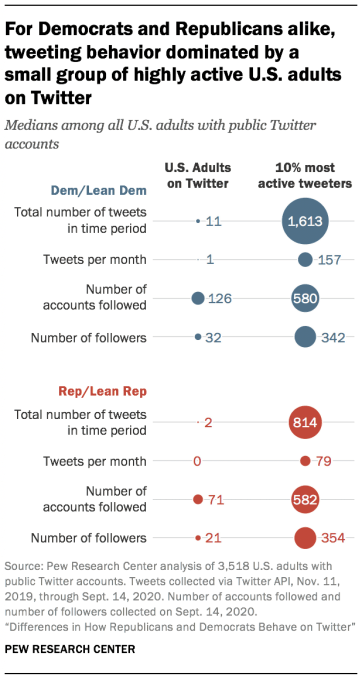 The new study additionally examined other differences in how members of the two parties use the platforms, beyond frequency of tweeting.

For starters, it found 60% of the Democrats on Twitter would describe themselves as very or somewhat liberal, compared with 43% of Democrats who don’t use Twitter. Self-identified conservatives on Twitter vs. conservatives not on the platform had closer shares, at 60% and 62%, respectively.

Pew also found that the two Twitter accounts followed by the largest share of U.S. adults were those belonging to former President Barack Obama (@BarackObama) and President Donald Trump
(@RealDonaldTrump).

This is perhaps a more important point than Pew’s study indicates, as it demonstrates that even though Twitter’s original goal was to build a “public town square” of sorts, where conversations could take place in the open, Twitter users have built the same isolated bubbles around themselves as they have elsewhere on social media.

Because Twitter’s main timeline only shows tweets and retweets from people you follow, users are only hearing their side of the conversation amplified back to them.

This problem is not unique to Twitter, of course. Facebook, for years, has been heavily criticized for delivering two different versions of reality to its users. An article from The WSJ in 2016 demonstrated how stark this contrast could be, when it showed a “blue” feed and “red” feed, side-by-side.

The problem is being exacerbated even more in recent months, as users from both parties are now exiting mainstream platforms, like Twitter, an isolating themselves even more. On the conservative side, users fled to free speech-favoring and fact check-eschewing platforms like Gab and Parler. The new social network Telepath, on the other hand, favors left-leaning users by aggressively blocking misinformation — often that from conservative news outlets — and banning identity-based attacks.

One other area Pew’s new study examined was the two parties’ use of hashtags on Twitter.

It found that no one hashtag was used by more than 5% of U.S. adults on Twitter during the study period. But there was a bigger difference when it came to the use of the #BlackLivesMatter hashtag, which was tweeted by 4% of Democrats on Twitter and just 1% of Republicans.

It’s somewhat concerning, too, that hashtags were used in such a small percentage of tweets.

While their use has fallen out of favor somewhat — using a hashtag can seem “uncool” — the idea with hashtags was to allow users a quick way to tap into the global conversation around a given topic. But this decline in user adoption indicates there are now fewer tweets that can connect users to an expanded array of views.

Twitter today somewhat addresses this problem through its “Explore” section, highlighting trends, and users can investigate tweets using its keyword search tools. But if Twitter really wants to burst users’ bubbles, it may need to develop a new product — one that offers a different way to connect users to the variety a conversations taking place around a term, whether hashtagged or not.