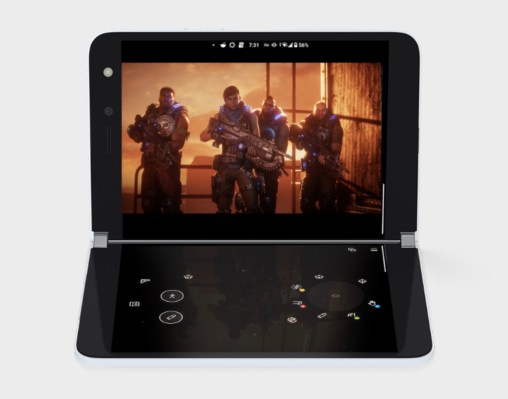 In December, Microsoft wrote a blog post highlighting “The year ahead for Surface Duo.” The news highlighted the dual-screen device’s upcoming availability outside the U.S. (including Canada, the U.K., France and Germany this year), as well as a smattering of features. It’s been pretty well acknowledged from most everyone who reviewed the device (us included), that it’s very much a work in progress.

After making the feature available in beta, Microsoft today is issuing at update to Xbox Cloud Gaming for Android that will unlock some of the product’s entertainment potential. It’s something the company has discussed, and even previewed, but until now, it has remained one of a handful of blind spots.

The app works as you’d expect on the Duo — displaying the game on the top screen and transforming the bottom into a virtual version of an Xbox controller in the Compose Mode orientation. Obviously you can only go so far on that front with a touchscreen, but gaming is genuinely an application where having a second screen can really come in handy.

As Engadget notes, there are now more than 50 titles that support Xbox Touch Controls. Those will be available to users with an Xbox Game Pass Ultimate subscription.

A much-hyped — and eagerly anticipated — alternative to the foldable form factor, the Duo was a disappointment on launch. The company has since dropped the product’s price from $1,500 to $1,000 — not exactly a sign that it was selling well — but continued software support like this is, perhaps, an indication that the company is going to support the line going forward, in spite of early stumbles.