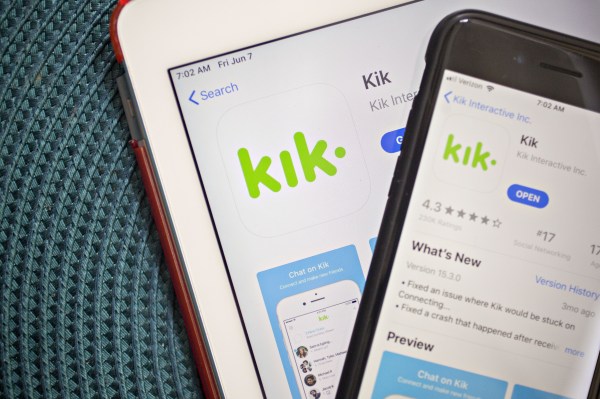 It echoes the same message from Kik’s chief executive Tim Livingston last week when he rebuffed earlier reports that the company would shut down amid an ongoing battle with the U.S. Securities and Exchange Commission. Livingston had tweeted that Kik had signed a letter-of-intent with a “great company,” but that it was “not a done deal.”

Now we know the the company: MediaLab. In a post on Kik’s blog on Friday the MediaLab said that it has “finalized an agreement” to acquire Kik Messenger.

“Kik is one of those amazing places that brings us back to those early aspirations,” the blog post read. “Whether it be a passion for an obscure manga or your favorite football team, Kik has shown an incredible ability to provide a platform for new friendships to be forged through your mobile phone.”

MediaLab is a holding company that owns several other mobile properties, including anonymous social network Whisper and mixtape app DatPiff. In acquiring Kik, the holding company is expanding its mobile app portfolio.

MediaLab said it has “some ideas” for developing Kik going forwards, including making the app faster and reducing the amount of unwanted messages and spam bots. The company said it will introduce ads “over the coming weeks” in order to “cover our expenses” of running the platform.

Buying the Kik messaging platform adds another social media weapon to the arsenal for MediaLab and its chief executive, Michael Heyward .

Heyward was an early star of the budding Los Angeles startup community with the launch of the anonymous messaging service, Whisper nearly 8 years ago. At the time, the company was one of a clutch of anonymous apps — including Secret and YikYak — that raised tens of millions of dollars to offer online iterations of the confessional journal, the burn book, and the bathroom wall (respectively).

In 2017, TechCrunch reported that Whisper underwent significant layoffs to stave off collapse and put the company on a path to profitability.

At the time Whisper had roughly 20 million monthly active users across its app and website, which the company was looking to monetize through programmatic advertising, rather than brand-sponsored campaigns that had provided some of the company’s revenue in the past. Through widgets, the company had an additional 10 million viewers of its content per-month using various widgets and a reach of around 250 million through Facebook and other social networks on which it published posts.

People familiar with the company said at the time that it was seeing gross revenues of roughly $1 million and was going to hit $12.5 million in revenue for that calendar year. By 2018 that revenue was expected to top $30 million, according to sources at the time.

The flagship Whisper app let people post short bits of anonymous text and images that other folks could like or comment about. Heyward intended it to be a way for people to share more personal and intimate details —  to be a social network for confessions and support rather than harassment.

The idea caught on with investors and Whisper managed to raise $61 million from investors including Sequoia, Lightspeed Venture Partners, and Shasta Ventures . Whisper’s last round was a $36 million Series C back in 2014.

Fast forward to 2018 when Secret had been shut down for three years while YikYak also went bust — selling off its engineering team to Square for around $1 million. Whisper, meanwhile, seemingly set up MediaLab as a holding company for its app and additional assets that Heyward would look to roll up. The company filed registration documents in California in June 2018.

According to the filings, Susan Stone, a partner with the investment firm Sierra Wasatch Capital, is listed as a director for the company.

Heyward did not respond to a request for comment.