Is EV charging the next gig for the gig economy? SparkCharge thinks so – TechCrunch 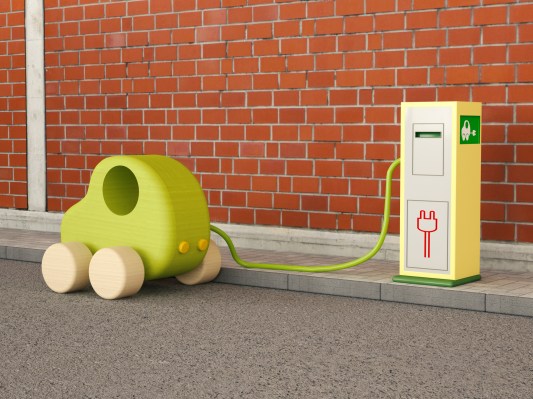 Last week the mobile charging battery company SparkCharge announced a partnership agreement with AllState that expands the company’s reach into vehicle services, driving the company further down the road toward its goal of making electric vehicle charging the next gig economy job.

The company, which has developed, designed and is commercializing a mobile vehicle charger, is also in the process of closing a $5 million round led by Shark Tank investor Mark Cuban and others as it brings its new mobile charging device, called the Roadie, to market.

SparkCharge’s 120 kilowatt fast charger can be delivered on-demand through a network of partners that now includes AllState and the Durham, North Carolina vehicle services startup, Spiffy. Customers can choose to top up with between 50 miles and 100 miles of charge using the Roadie, which is the lynchpin in a broader charging network that SparkCharge’s founder, Joshua Aviv, envisions.

“You can say I want a charge at this point in time at this location and this much range,” Aviv said. “You pay and have the charge delivered all on one app.”

Working through companies like Spiffy and AllState is one way to get to market, but SparkCharge’s chief executive thinks that independent workers could start up their own businesses offering on-demand charging to customers.

On-demand charges cost roughly 50 cents per mile and a customer can get a significant enough charge for as little as $10, according to Aviv.

“We’re basically creating a whole new [charging] network,” said Aviv. “This isn’t a network meant to be a stopgap. It’s a network that’s always on, always available and better and faster than [traditional chargers]… we don’t need permits, we don’t need construction. With our unit, you take it out of the box, you plug it into the car, you push a button and begin charging. With us, every parking spot, every location — that’s now a charging station. That’s a much better network than the legacy.”

Folks who wanted to offer the charging services would pay roughly $450 per month for the equipment and that would give them the battery and the equipment they would need to start their own on-demand EV charging business.

The Somerville, Massachusetts-based company was born from Aviv’s own fascination and frustration with the current state of electric vehicle charging infrastructure.

As The Wall Street Journal noted, the lack of charging infrastructure is one of the major obstacles that electric vehicles have to overcome for them to achieve mass adoption.

In a survey of 3,500 electric vehicle drivers, cited by the Journal, which was conducted in September and October of last year by the advocacy group Plug In America, over half of respondents reported having problems with public charging. Those problems are worse for drivers who don’t own Teslas.

Whatever else may be true about the EV that Elon built (along with thousands of workers and a slew of additional innovators and company founders), Tesla’s emphasis on having mostly adequate charging infrastructure to support its customers has paid huge dividends. And other carmakers, retailers and standalone charging service providers are only beginning to catch up.

Companies ranging from oil majors like Shell to automakers like Volkswagen, who spent $2 billion to build out an electric vehicle charging network as part of the settlement from its diesel emissions chicanery, have networks built out or in the pipeline.

For Aviv, who has owned an electric vehicle since 2013 when he bought a Chevrolet Volt, the problem was clear. He began working on the company in 2014 while still a student at Syracuse University. A professor and advisor at the university had previously served on the board of the Environmental Protection Agency and was a huge proponent of electric vehicles.

After college Aviv continued to work on the business developing a portable charging station and then creating a platform for distribution and sales and a network of service providers on top of it. That’s how SparkCharge was built.

In the early days, the company received assistance from groups like the Los Angeles Clean Technology Incubator and investors like Techstars Boston, Techstars, Steve Case’s Rise of the Rest fund and his Revolution investment firm, PEAK6 Investments and the Buffalo, New York-based accelerator 46North, along with investors like Cuban.

“I saw that the current [charging] infrastructure that we have has a lot of flaws,” Aviv said. They include the downtime between charging infrastructure upkeep, the time it takes to grow the charging network and the lack of maintenance and support for chargers.

“There’s a huge push to move these chargers,” he said. “You don’t want these EV drivers to drive around a city with no guarantee of infrastructure. It’s an interesting tug of war that’s going on that we’re going to see unfold and consumers might be more persuaded to drive an EV [with SparkCharge] because not only can you deliver range but you can request it on demand.”

Early Stage is the premiere “how-to” event for startup entrepreneurs and investors. You’ll hear firsthand how some of the most successful founders and VCs build their businesses, raise money and manage their portfolios. We’ll cover every aspect of company-building: Fundraising, recruiting, sales, legal, PR, marketing and brand building. Each session also has audience participation built-in — there’s ample time included in each for audience questions and discussion.