Instagram will require users to provide their birthday – TechCrunch 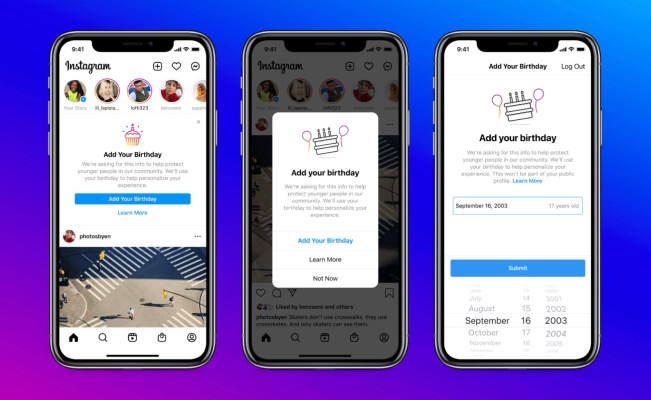 Instagram will begin prodding users to share their birthday with the service, if they haven’t already done so. The company today announced it will now start popping up a notification that asks you to add your birthday to “personalize your experience.” But the prompt can only be dismissed a handful of times before becoming a requirement. The move is a part of Instagram’s larger goal to create new safety features aimed at younger users, the company explains. This includes the teen privacy protections introduced earlier this year, as well as Instagram’s longer-term plan to launch a version of its service aimed at users under the age of 13.

This March, Instagram rolled out new features that made it more difficult for adults to contact teens through its app. Then in July, the company announced a larger series of changes to the default settings for new users under the age of 16. It will now default these users’ accounts to “private” and limit their accounts from being suggested elsewhere in the app. It also now restricts adults whose accounts are flagged as “potentially suspicious” from being able to reach out to other minors or interact with their posts.

Starting this week, Instagram says users who have not yet shared their birthday will begin to see pop-up notifications when they open the Instagram app.

These notifications will appear a handful of times, but at some point, users will no longer be able to dismiss the message by tapping “Not Now.” Instead, everyone will ultimately be required to share their birthday to continue to use Instagram.

The company will also now request you to share your birthday information when you come across a post with a warning screen. These screens, which hide content that’s flagged as sensitive or graphic, are not new. But Instagram has never before asked for a user’s birthday before displaying the hidden content. 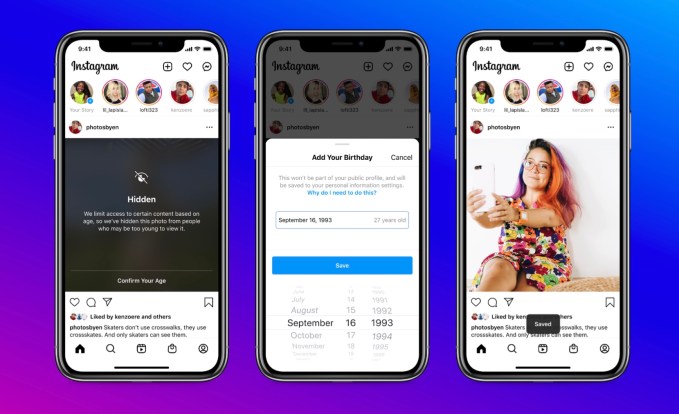 The birthday entry form itself is not complex. You simply scroll to choose the month, day and year of your birthday.

Of course, kids are commonly known to lie on these entry forms in order to bypass restrictions when signing up for apps. On this front, Instagram has developed A.I. technology to help it identify accounts were kids may have lied. For instance, it may be able to infer someone’s birthday based on comments left on “Happy Birthday” posts, where the user’s age may be referenced. The company also hints at further plans in this area, noting how it will later require users to verify their age when Facebook’s technology determines a mismatch between the age the user submitted and what appears to be their real age, based on other signals.

That technology is still in the “early stages,” says Instagram, but will involve a menu of options that will allow someone to verify their age.

The need to have users’ birthdays on hand isn’t only meant to power the recently launched teen protection features. Instagram is also working to bring its app to younger users — a decision that’s been met with a hostile response from legislators and consumer advocacy groups alike. In addition, age remains an important data point for ad targeting. Even as Instagram pulled back on the ability for marketers to target teens using interest data or their activity on other apps, it will continue to allow ad targeting based on age, gender and location across age groups.

The company is now one of several to have rolled out added protections for younger teen users, ahead of regulations that would force them to do so. Over the course of this year, TikTok, YouTube, and Google have also announced changes to how younger teens can use their services and how they can be targeted by ads, in anticipation of a regulatory crackdown. While each has crafted its own set of teen safety features independently, the changes have largely addressed making the default settings for new teenage users more restrictive.

Instagram says the new birthday pop-up notifications will begin to appear this week on the mobile app and will continue to roll out over the weeks ahead to reach more users.