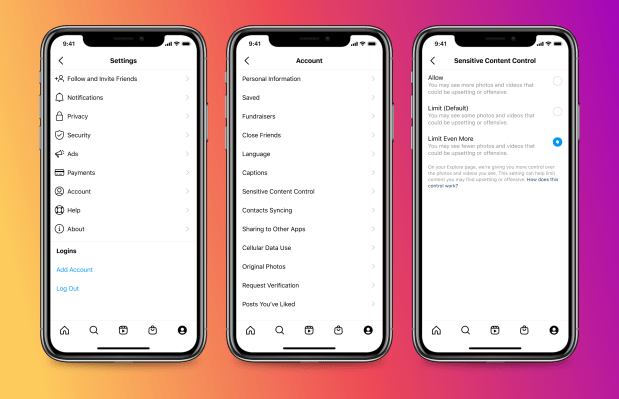 Instagram is giving its users a tiny bit more power to see what they want — and not see what they don’t want — in its content discovery hub. The company introduced a new toggle called “Sensitive Content Control” on Tuesday that allows anyone to screen posts that it thinks could be offensive, hiding them from the Explore tab.

The new feature appears in the settings menu and lets users choose to either allow more content that could be “upsetting or offensive,” limit that content or “limit even more.” The phrasing is kind of weird but it acknowledges that the company’s moderation efforts aren’t perfect, and that’s realistic at least.

“You can think of sensitive content as posts that don’t necessarily break our rules, but could potentially be upsetting to some people – such as posts that may be sexually suggestive or violent,” Instagram explained in the announcement.

TechCrunch asked the company to expand on what kinds of posts are screened out under each category and if human or algorithmic moderation determines what is sensitive, but did not receive a response.

We also asked if the company has any plans to create separate toggles for violence and sexual content, considering that a lot of people comfortable with the latter might be less inclined to see violence bubble up among the app’s makeup tutorials and influencer junkets.

Instagram is notorious for over-policing content that the platform deems to be sexual. A campaign from Black plus-size model Nyome Nicholas-Williams successfully pressured the platform into relaxing one of its overly restrictive nudity rules last year.

Instagram contextualized the new content controls as part of a new effort to give users more power to determine what shows up in their feed. “We believe people should be able to shape Instagram into the experience that they want,” the company wrote in a blog post, noting that recent changes like being able to disable comments also give users more choice.

While the company is giving users more control over its algorithm in some small ways, it’s also considering giving them less. Last month, Instagram began testing algorithmic suggestions mixed into the main feed, a design choice that would let the company inject the platform with even more of what it wants you to see.