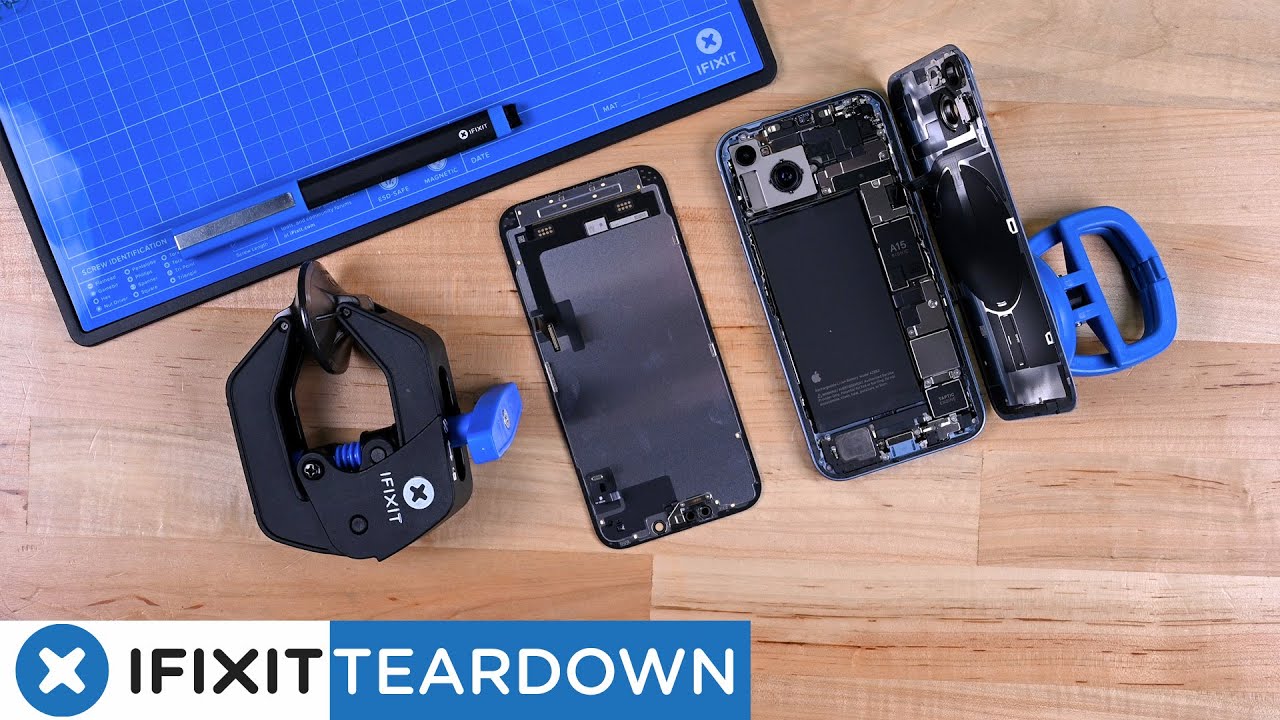 The best feature of the iPhone 14 is one that Apple didn’t tell
you about. Forget satellite SOS and the larger camera, the headline is this: Apple has completely redesigned
the internals of the iPhone 14 to make it easier to repair. It is not at all visible from the outside, but
this is a big deal. It’s the most significant design change to the iPhone in a long time. The iPhone 14 Pro and Pro Max models still have
the old architecture, so if you’re thinking about buying a new phone, and you want an iPhone that really
lasts—besides the one in your pocket—you
should keep reading.

If this surprises you, you’re not alone. It surprised us! The new features and external changes to the iPhone
14 are so slight that The Verge suggested it should have been called
the iPhone 13S, saying “The iPhone 13, which came out a year ago and Apple is still selling, is nearly
identical to the 14.”

But that’s actually not true—though almost nobody had any way of knowing.  Apple didn’t mention
the secret redesign in their keynote. If reviewers had disassembled the phone, they would have discovered
this: The iPhone 14 opens from the front and the back.

This is the iPhone 14 reborn as a beautiful butterfly—a midframe in the middle, accessible screen on the
left, and removable rear glass on the right.

That’s no small feat. The new metal midframe that supports the structure required an entire internal
redesign, as well as an RF rethink and an effective doubling of their ingress protection perimeter. In other
words, Apple has gone back to the drawing board and reworked the iPhone’s internals to make repair easier.
It’s an upgrade so seamless that the best tech reviewers in the world didn’t notice.

A Brief History of Phones

We’ve written thousands of repair guides for smartphones,
so before we dive into the details of the 14, let’s take a bird’s-eye view at the mechanical evolution of
smartphones. The iPhone has gone through a few major architectural shifts over the years.

The original phones opened screen first, making screen swaps on the 3G a
breeze. But getting at other parts, like the charge port and battery, was a lot harder.

To solve that Apple flip-flopped their approach with iPhone 4, making the phone open back first. That allowed
for all kinds of cool aftermarket options like our transparent rear panel (I
still think this is pretty badass), but unfortunately made screen swaps a total pain. Apple pivoted back to
a (more streamlined) front-entry for the 5, and has stuck with it ever since. Opening the phone screen-first
made screen repairs vastly easier, and has generally worked out pretty well, save for one major
drawback—we’ll get to that in a minute.

That design is in marked contrast
to the rest of the phone industry. Almost every Android phone opens from the back. Ever since the Galaxy S6, the iPhone’s nemesis has had a glued on back panel.
Any repair tech will tell you that screen
swaps on the Galaxy are much harder than screen swaps on the iPhone. You have to unglue the back
panel, and then systematically work your way all the way through the phone removing components. Once the
whole thing is essentially de-manufactured, you’re left with the screen assembly. Then you have to put
together your entire phone! It’s quite a process, considering screens are the most common component to
repair.

The iPhone 8 Ushered in an Era of Pain

From our perspective, the iPhone’s design has optimized fast Apple store service of two critical components:
the screen and the battery. The disadvantage with this front-optimized design, of course, is that it’s hard
to swap out the back panel. That wasn’t really an issue until the iPhone 8, when they switched to
radio-transparent glass to support wireless charging and NFC payments. Then, with the X, they welded a bulky
camera lens cover over that glass.

If replacing the screen on a Galaxy phone is hard, changing the back glass
on an iPhone X (or 11, or 12, or 13) is murder. The easy part is removing every single component
from the phone. Seriously, you don’t want to leave any parts in there because the process is pretty rough on
the hardware. The adhesive holding the back glass down is so powerful that none of our usual techniques of
prying, heat, or chemicals budge it. Repair shops deploy a variety of aggressive shattering and scraping
techniques to remove the glass while carefully working around the welded camera bezels. The
“easiest” way uses a laser to systematically raster-vaporize the adhesive before then shattering and
scraping the glass shards off with razor blades and cutting tools. At the very least, heavy duty gloves are
required equipment if you don’t want to slice your hands open. Resultantly, this is not really a viable
process for DIYers. I’ve never done it, and hope I never have to.

Enter the iPhone 14. The back glass is simply secured with two screws and a single connector. Apple has
seemingly used a slightly less aggressive adhesive, making opening it up a tad easier than screens of yore.
And as a bonus, removing the exact same screws as the back glass gets you access to the screen.
Just two screws, and both screen and back glass are immediately accessible. Incredible.

This is a dramatic rethinking of the phone, and the new approach impacts most aspects of the design. Adding a
whole new opening surface introduces a world of engineering challenges. There’s twice as much perimeter to
seal against water, lots of radio frequency complications, and a whole world of parts changes.

Any time you glue or weld something together, it’s easier to achieve thinness and durability targets. We’ve
long said that designers could get all of the design features and functionality they’re looking for, as well
as repairability, if they just put in a little more effort to avoid the glue. Well this time, Apple put in
the effort.

There’s a new midframe behind the screen that all the internal components are mounted onto. The incredible
wealth of antennas that make modern 5G + GPS + Wifi + Bluetooth + satellite signaling all work in one device
require extensive grounding. Ten new electromagnetic interference fingers connect to contact points spaced
across the rear panel to preserve grounding that was previously accomplished with welds.

Achieving the high levels of durability that we all expect is an incredible engineering challenge. When you
drop an iPhone 13, its metal frame absorbs that shock, transmitting and spreading the force across the
glued-in battery and sturdily adhered rear glass. The iPhone 14 meets this same challenge, but achieves the
required torsional rigidity in a totally different way. A new midframe sits between the display and the guts
of the phone and takes the brunt of force distribution across the frame and battery.

Another design challenge is the number of components that are integrated into the display assembly.
Historically, these have included the Face ID sensor, the speaker, and the ambient light sensor. We noticed
in the 13 Pro that Apple had
relocated the earpiece speaker and front-facing camera
from the display to the mainframe. At the time, we appreciated the move as incrementally increased
modularity, but we didn’t quite understand the rationale. Now it appears it laid the groundwork for a vastly
improved design.

The advertised flagship features of the iPhone 14 are satellite-powered SOS, an upgraded camera, and a
missing SIM card slot. We’ll dive into more detail with our iPhone 14 Pro Max teardown, but here are some board shots while you
wait.

Apple’s pursuit of density is unparalleled. The iPhone 14 Pro Max logic board features the A16 processor,
which is an incremental 10-15% performance advancement over the 14’s A15.

The interior of the US Pro Max logic board features the communications chips and the large SIM reader gap.

One sneak peek ahead of time: we can confirm that the satellite connectivity is powered by a new Qualcomm
X65 modem, which adds new 2.4 GHz n53 band
capabilities to support Globalstar. ICJay Monroe, Globalstar’s Executive Chairman, bragged about this in a
press
release earlier this year: “We have appreciated a close relationship with Qualcomm since the
inception of the company and want to thank the team there for their hard work in helping us deliver on Band
n53’s promise.”

We are hearing reports that Apple is continuing their hostile path of pairing parts to the phone, requiring
activation of the back glass after installation. You really shouldn’t need Apple’s permission to install a
sheet of glass on a phone that you already own.

Using software to prevent the use of aftermarket parts gets a big thumbs down from us. These locks are
frustrating and ultimately futile—Apple simply can’t control all the repairs that happen with their
products, no matter how hard they try. We’ll be reporting on parts compatibility a bit more after we finish
our lab tests, unless Apple miraculously posts their service manuals.

This is the most substantial iPhone redesign since the X. It’s hard to overstate how big a change this is.
For a reference point, Samsung hasn’t changed their phone architecture since 2015.

So, with the biggest update in years, we’re upgrading the iPhone 14 to a repairability score of 7 out of 10.
That’s the best score we’ve given an iPhone
since the iPhone 7. This is the most repairable iPhone in years.

This is such a big deal that it should have been Apple’s big announcement—the iPhone has been redesigned from
the inside out to make it easier to repair. In fact, just days before we started this teardown,
iFixit’s very own Sam
Goldheart argued that in this day and age, a product launch shouldn’t just rattle off tiny new
features. Why isn’t Tim Cook bragging about repairability? We had no idea this was coming, because Apple
didn’t mention it—at all. But they should have.

This design improvement is a big win. These changes to the iPhone will help it last longer and reduce its overall
impact on the planet. With any luck, it will inspire other manufacturers to follow suit.

All of our—and your—work has paid off. Our advocating, lobbying, yelling in the streets. We’ve convinced
Apple’s design team that repairability matters. Now we need your help to convince their marketing team to
talk about it when they take the biggest stage in tech.

If you’re trying to decide whether to go with the 14 or the Pro or Pro Max, from a repairability
perspective the answer is clear: It’s the 14 all the way. Let’s hope this advanced design becomes the
standard across the iPhone 15 lineup. In the mean time, the greenest phone is the one you’ve already got, so
join us in skipping the upgrade, we’ve got
the refresh you need at the price you’ll like.

Want your phone to look like this, but without the heating and prying? We’ve got you. iPhone 14 Teardown wallpapers
are live—and free! The backgrounds for the 14 Pro will be available soon, for now, check out the iPhone 14 Pro Max teardown to get a
preview.