India announced sweeping changes to its guidelines for social media, on-demand video streaming services, and digital news outlets on Thursday, joining several other nations in posing new challenges for giants such as Facebook and Google that count the nation as its biggest market by users.

Ravi Shankar Prasad, India’s IT, Law, and Justice minister, said in a press conference that social media companies will be required to acknowledge takedown requests of unlawful content within 24 hours and deliver a complete redressal in within 15 days. In sensitive cases that surround rape or other similar criminal cases, firms will be required to take down the objectionable content within 24 hours.

These firms will also be required to appoint a chief compliance officer, a nodal contact officer, who shall be reachable round the clock, and a resident grievance officer. They will also have to set up a local office in India.

Prasad said social media firms will have to disclose the originator of objectionable content. “We don’t want to know the content, but firms need to be able to tell who was the first person who began spreading misinformation and other objectionable content,” he said. WhatsApp has previously said that it can’t comply with such traceability requests without compromising end-to-end encryption security for every user.

The guidelines, which replace the law from 2011, go into effect for small firms effective immediately, but bigger services will be provided three months to comply, said Prasad.

New Delhi has put together these guidelines because citizens in India have long requested a “mechanism to address grievances,” said Prasad. India has been working on a law aimed at intermediaries since 2018. You can read the final version of the draft here, courtesy of New Delhi-based advocacy group Internet Freedom Foundation.

“India is the world’s largest open Internet society and the Government welcomes social media companies to operate in India, do business and also earn profits. However, they will have to be accountable to the Constitution and laws of India,” he said, adding that WhatsApp had amassed 530 million users, YouTube, 448 million users, Facebook’s marquee service 410 million users, Instagram 210 million users, and Twitter, 175 million users in the country. 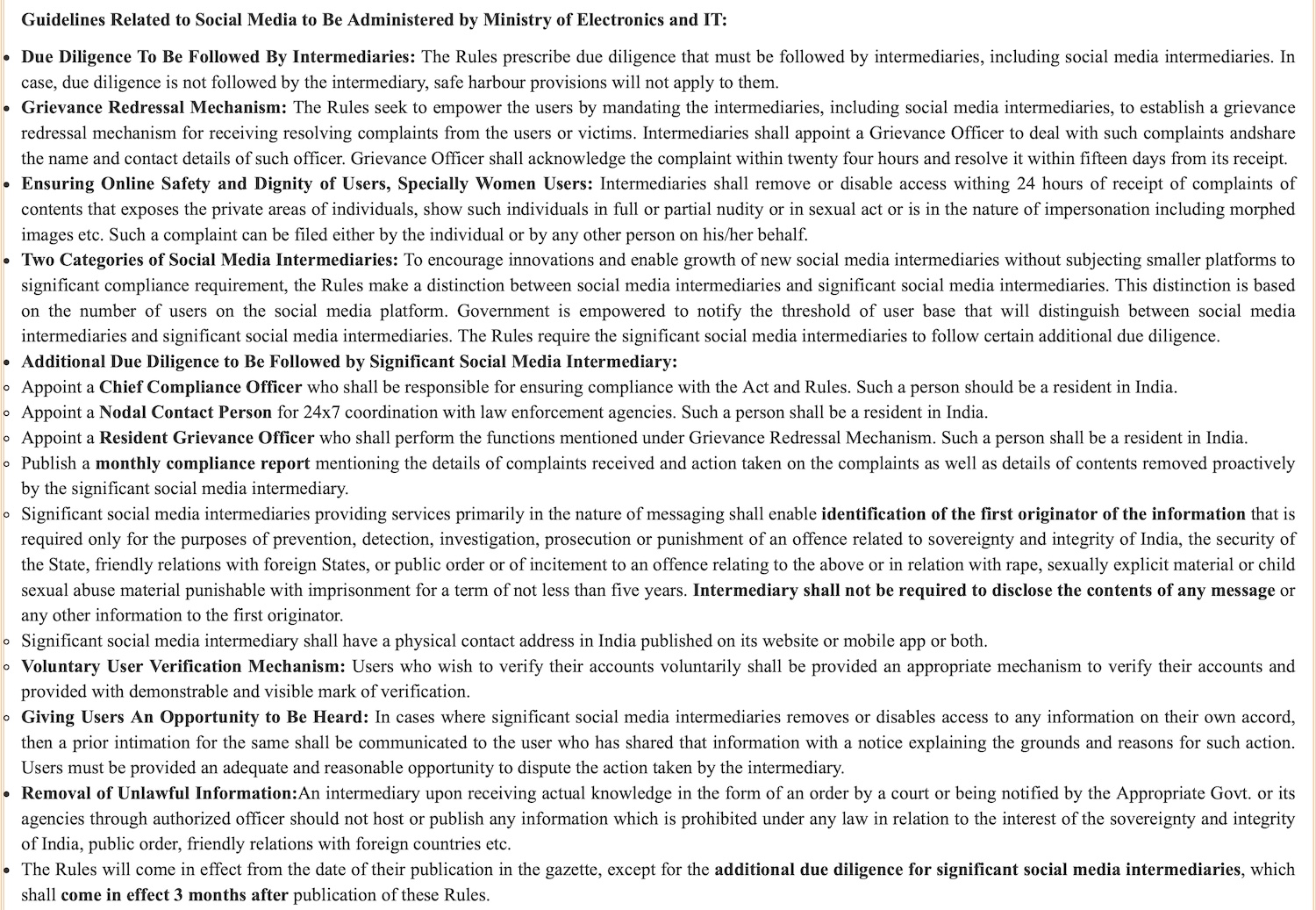 For streaming platforms, the rules have outlined a three-tier structure for “observance and adherence to the code.” Until now, on-demand services such as Netflix, Disney+ Hotstar, and MX Player have operated in India with little to no censorship.

New Delhi last year said India’s broadcasting ministry, which regulates content on TV, will also be overseeing digital streaming platforms. 17 popular streaming firms including international giants had banded together to devise a self-regulation code. Prakash Javedkar, Minister of Information and Broadcasting, said in the conference that the proposed solution from the industry wasn’t adequate and there will be an oversight mechanism from the government to ensure full compliance with the code.

Streaming services will also have to attach a content ratings to their titles. “The OTT platforms, called as the publishers of online curated content in the rules, would self-classify the content into five age based categories- U (Universal), U/A 7+, U/A 13+, U/A 16+, and A (Adult). Platforms would be required to implement parental locks for content classified as U/A 13+ or higher, and reliable age verification mechanisms for content classified as “A”,” the Indian government said.

“The publisher of online curated content shall prominently display the classification rating specific to each content or programme together with a content descriptor informing the user about the nature of the content, and advising on viewer description (if applicable) at the beginning of every programme enabling the user to make an informed decision, prior to watching the programme.”

The new rules will also force digital news outlets to disclose the size of their reach and structure of their ownership.

Industry executives have expressed concerns over the new proposed regulation, saying New Delhi hasn’t consulted them for these changes. IAMAI, a powerful industry body that represents nearly all on-demand streaming services, said it was “dismayed” by the guidelines, and hoped to have a dialogue with the government.

Javedkar and Prasad were asked if there will be any consultation with the industry before these guidelines become law. The ministers said that they had already received enough inputs from the industry.

This is a developing story. Check back for more information…