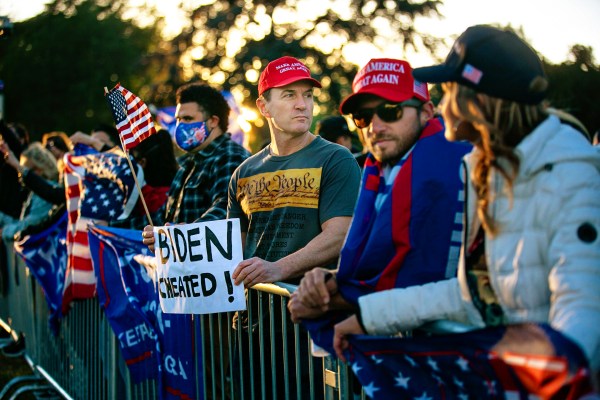 Chafing at new misinformation safeguards and a lost election, dejected Trump supporters flocked to the alternative social network Parler over the weekend. Parler’s homepage promises that users can “Speak freely and express yourself openly, without fear of being ‘deplatformed’ for your views.”

Parler shot up the charts across Apple’s App Store and the Google Play Store in the days following official election results. An Android app called “Parlor” was also trending Monday, likely due to misspelled searches for Parler.

Parler sat at #7 in the App Store on Saturday, November 7, according to mobile app market analysis from Sensor Tower. By the next day, it shot up to #1 — a first for the app. It remains in the top slot now, in contrast to its position a week ago as the 1,023th most downloaded app.

The story is similar in Google’s own app marketplace, where Parler climbed from #51 on Saturday to #5 on Sunday, topping out in the #1 slot today. The Fox News competitor Newsmax TV and the self-described “next-gen social network” MeWe also sat in Google’s top 5.

Parler’s ascent is notable but not totally new. Accounts anticipating a ban have been pointing their followers toward Parler and other far-right havens with every new platform policy change that Twitter and Facebook make. Gab, which describes itself as “the free speech social network” is also vying for Trump loyalists.

“It’s crazy to believe that only a handful of Silicon Valley companies will have complete control over the flow of information, communication and news forever,” Gab CEO Andrew Torba wrote in a blog post Sunday.  Torba was booted from Y Combinator’s alumni network for threatening comments and harassment shortly after the 2016 election.

But in spite of calls for a mass exodus, many prominent conservative figures accusing Twitter and Facebook of censorship have maintained their presences on the platforms, knowing that their reach would be dramatically limited on the alternative social networks.

Fox News contributor and Trump enthusiast Dan Bongino called for his own supporters to move to Parler last week, warning that “Fakebook” might act against his page. On Facebook, Bongino’s content regularly ranks in the top performing posts on the platform and his page has nearly four million followers. Notably, Bongino announced an ownership stake in Parler earlier this year.

BREAKING 🚨
It’s going down.
Fakebook went after Mark Levin’s page yesterday and tonight they’re going after my page. If my page is taken down tonight, or in the coming days, find me on Parler at “dbongino.”

Over on Parler, the Trump campaign is raising donations for an “election defense task force,” but according to the fine print half of every donation will go toward existing debt. The campaign doesn’t appear to have made much original content on the niche social network lately, instead reposting very similar messages over and over.

For the many Trump supporters pushing dangerous false claims about the election, the writing was on the wall. Facebook made a rapid-fire series of policy changes in the months preceding the election, banning QAnon, cracking down on violent militias and introducing new tools to slow the spread of misinformation, which metastasized on the social network over the last four years.

As it became clear that Trump’s effort to delegitimize the election was picking up steam, Facebook cracked down. The company began hiding search results for the #StopTheSteal hashtag and removed one of its popular groups over “calls for violence” made by some members.

In spite of his loss, President Trump has refused to concede the election. But by Monday, Biden’s transition team had already kicked into high gear, announcing members of a coronavirus task force that will seek to rein in the deadly virus where Trump has failed.

With election results settled, the vast machinery of the U.S. government moved steadily toward January’s transfer of power, as it has in every other election.