Alternative social media apps, including MeWe, CloutHub and other privacy-focused rivals to big tech, are topping the app stores following Trump’s ban from mainstream social platforms like Facebook and Twitter and the more recent removal of conservative social app Parler from both the App Store and Google Play. In the days since the Parler ban, “free speech”-favoring social networks are seeing notable numbers of new downloads at a quick pace, data shows.

Next-generation social network MeWe, founded in May 2012, is one of those that’s seeing the largest bump in new installs.

The app has been steadily growing in the days since the U.S. presidential election and the related increases in moderation of misinformation by larger platforms like Facebook and Twitter. Mainstream social networks enforced their policies and even created new ones to moderate content shared by Trump and his allies — including their baseless claims of election fraud that have not be substantiated by U.S. courts, despite dozens of lawsuits.

To date, MeWe has seen over 16 million global lifetime installs, according to data from app intelligence firm Apptopia. However, since Wednesday of last week, the app has been downloaded nearly 200,000 times worldwide. A majority of those new downloads are coming from U.S. users, who accounted for nearly 143,000 installs.

Largely, those users came to MeWe following Parler’s ban from app stores. Apple gave Parler the boot late on Saturday, and MeWe popped in the charts as a result. Saturday through Sunday alone, MeWe gained 110,200+ new installs in the U.S.

The company told us it has seen 1 million new members sign up in the last 72 hours and now adds over 20,000 new members per hour.

Because app stores’ Top Charts reflect not just total downloads but also the velocity of those new installs, MeWe has gained a position in the top 10 very quickly due to recent trends.

As of Sunday, MeWe ranked No. 7 in the U.S. App Store’s Top Overall free charts. It’s already moving up today.

This is remarkable growth for the alternative social app, given that as recently as October the app was not ranked on the App Store’s Top Charts at all. (Being unranked means that the app is so far down on the charts, it’s lower than rank No. 1,500 — so its rank is basically untrackable.) MeWe did, however, chart in the Social Networking category at some points during this time.

Another app benefitting from recent events, including the Parler ban, is the relative newcomer CloutHub.

The app was launched in January 2019 and claims to be a social network for “social, civic, and political networking” with a free speech angle. Its website says it wants to give “everyone a platform to have their voice heard.”

To date, CloutHub has seen just 255,000 total lifetime installs, but 31,000+ of these have come over the past week — or more specifically, since Wednesday. (CloutHub may be struggling with the surge of new users, as we found sign-ups and logins are often timing out.) The app as of now ranks No. 11 on the U.S. App Store.

Two other apps that have moved into the top charts are cases of mistaken identity.

As Mashable recently reported, an app called “Parlor” is being mistaken for the now-banned “Parler” app. Its report cited Sensor Tower data that said “Parlor” has seen as many as 40,000 downloads in December alone.

Apptopia says the social chat app, founded in May 2011, has seen 8.6 million lifetime global installs. But from Wednesday through Sunday, it gained 115,846 new users — many who were likely looking for “Parler.” Of those, 99,220+ arrived on either Saturday or Sunday, just as the Parler ban was beginning to roll out. Even though Apple didn’t take action on Parler until later on Saturday, users may have come across “Parlor” by searching for it by this alternative spelling.

As of Sunday, “Parlor” became the No. 4 Top App Overall on iOS in the U.S.

Meanwhile, an app called “Gab News” — which is actually just a local news app for the Georgetown area — is also gaining ground. This is because it’s mistaken for the long since banned app “Gab,” which ex-Parler users are suggesting as an alternative. Apple had declined to host Gab back in 2016, citing its pornographic content and later, due to its policies against hosting apps that include hate speech. Though Gab was able to launch on Google Play in 2017, the app was quickly removed from there as well, also for hate speech.

“Gab News,” however, is currently ranking No. 44 on the App Store’s Top Free Apps Chart in the U.S., as of the time of writing. (Download data was not immediately available.)

The Parler ban is not the only thing triggering these shifts, to be clear. 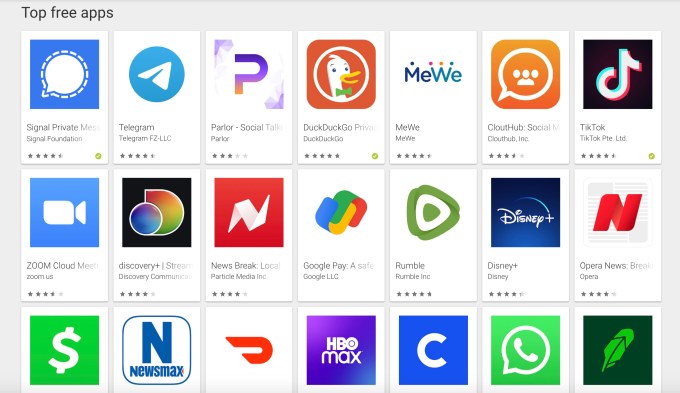 There’s also a general backlash underway against big tech, which many on both sides feel has become too powerful.

Governments have been examining the business models and practices of companies like Apple, Google, Amazon and Facebook over the past year in markets around the world with an eye on antitrust action. Facebook and Google are also being scrutinized by users for their privacy practices — especially as Apple is now forcing companies to add privacy labels to all apps that disclose what they do with user data.

As a result, some people were turning to alternative networking apps not just because they’re conservative, but because they value privacy. As a result, encrypted messaging apps like Signal and Telegram are booming in recent days, as is the privacy-focused search engine DuckDuckGo, a Google.com alternative.

That said, it’s also worth noting that some users may be seeking private messaging platforms in the wake of the U.S. Capitol riots, now that the FBI has begun to arrest insurgents. Signal has gained nearly 325,000 new installs since Thursday and Telegram gained 330,600+, for example.

This rapid shift to alternative social and messaging networks is an indication of how difficult it may be in the weeks ahead for app stores to enforce their policies. Though the platforms typically crack down on apps hosting hate speech and those allowing incitement of violence, they tend to move more slowly than the crowd downloading the next alternative app.

In the meantime, the apps that become popular may struggle with moderation. We’ve already come across examples of both extreme hate speech and calls for assassination on MeWe, for instance, even though the company’s public statements say it investigates and removes this sort of content. (MeWe has been asked to comment.)

It’s unclear what the future for these free speech, alternative apps may hold, as platform providers such as Amazon (AWS) are now also declining to host them, and payment providers, like Stripe, which just cut ties with the Trump campaign, may decline to process future online payments. That could leave the networks to ultimately scramble for private funding to build their own infrastructure and stay afloat, as well as to seek out alternative distribution systems, like the web or even sideloading, to reach their users.