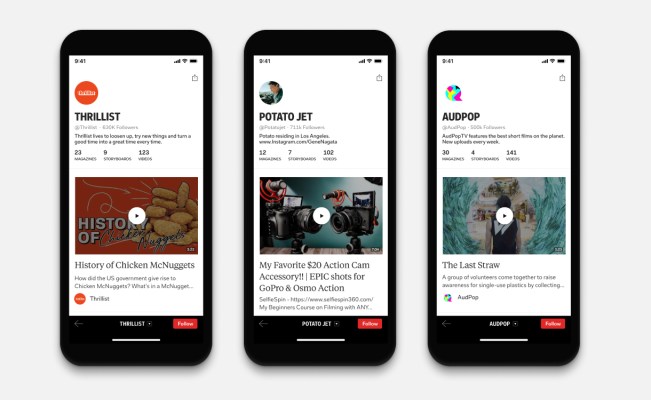 News app Flipboard is further expanding into video with Flipboard TV. The company’s curated video service first launched earlier this year as a Samsung exclusive, and is now making its way to all Flipboard users in the U.S. With today’s launch, the service will offer users access to video from hundreds of publishers, including global publishers, local news publishers and, now, select independent video producers, too.

Samsung Galaxy device owners will continue to have exclusive access to upgrade to the premium, ad-free version of Flipboard TV. For everyone else, the service will be ad-supported.

As of today’s expansion, Flipboard has also lined up a number of media partnerships who will provide their video feeds to Flipboard’s app. This list includes Complex Networks, Minute Media, A360 Media, Group Nine Media, The Recount, Bonnier Corp, Refinery29, Dow Jones, Hearst Magazines, Gannett, Vice Media Group, and Penske Media Corporation, with brands such as Rolling Stone and Variety. Video from Euronews, Tribune Publishing, and dozens of others will also be available through a new partnership with VideoElephant, the company says. 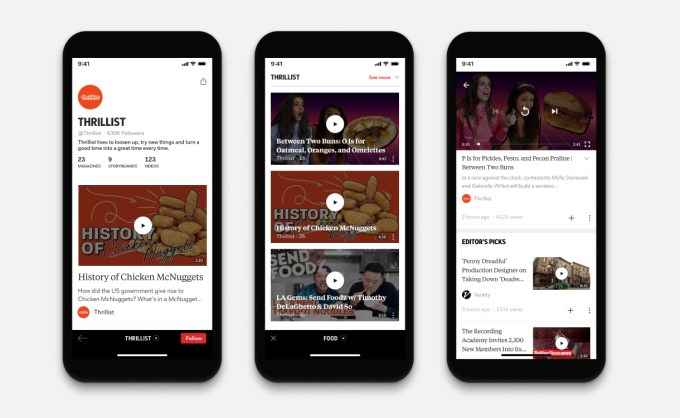 In addition, Flipboard is bringing independent publishers on board for the first time, like filmmaker Gene Nagata (aka Potato Jet) and video journalist Johnny Harris. These have been onboarded through Flipboard’s partnership with the influencer agency, Spacestation Integrations. Other independents include Gary Vaynerchuk, AudPop’s filmmakers, and Underknown, producer of video series such as “What If” and “How To Survive.”

Despite its expansion beyond traditional news publications, Flipboard says it’s making careful choices when it comes to its video lineup, in terms of quality.

“It’s not a free-for-all,” says Flipboard VP of Global Growth and Biz Dev, Claus Enevoldsen. “We have been very conscious about the whole ecosystem and making sure that what shows up for you in ‘For You’ is stuff that we know is not fake news. It’s trusted sources. That’s always been our MO, and we extend that to the video space, as well,” he explains.

The new video feeds will be available within a dedicated Video Tab in Flipboard’s Content Guide. The company says users will be able to more easily find videos to watch within the app due to improved discovery features and deeper integrations. In addition to its Content Guide, 20 top-level topics will now offer video-only feeds alongside articles, including travel, politics, local, lifestyle, sports, news, and more. The videos will also be more prominent in users’ “For You” feeds, which is a mix of editorial and algorithmic curation.

Users will be able to add video-only feeds to their own magazines, too, if they prefer.

These videos, for the first time, will play natively within Flipboard. This helps to power Flipboard’s recommendation engine that directs you to related videos, the company says. This change also means users will be able to use additional video controls, like those that let them skip to the next video, for example. 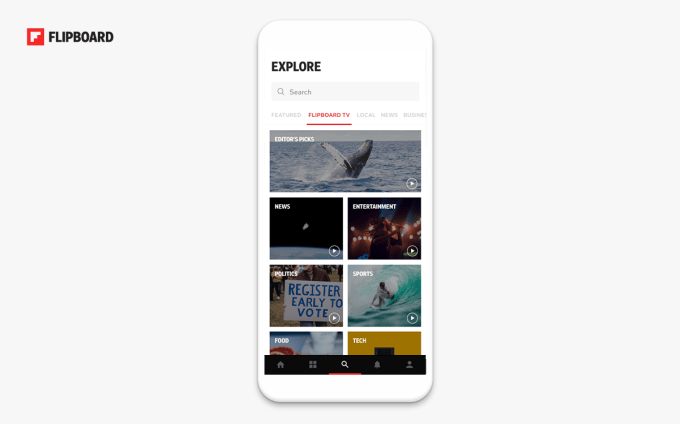 The new video effort additionally ties into Flipboard’s recent expansions into local news that began at the start of 2020. As of this June, Flipboard’s local news coverage reached 50 cities across the U.S. and Canada.  Today, that number is 61. Now, Flipboard users will be able to follow their favorite local news outlets’ video content, as well, directly in Flipboard.

This presents what’s often a much cleaner experience that visiting the news publishers’ own app or website. Flipboard, meanwhile, offers an undisclosed revenue-share with its news partners, derived from the advertising that runs in their videos.

These ads play both as pre-rolls and mid-rolls, Flipboard says. This is the first time it’s run pre-roll ads on its platform — something that the company believes will help to address demand from publishers for high-quality, brand-safe digital video experiences on mobile.

At launch, Flipboard is selling the ad inventory for the videos. But the company says its intent is to allow publishers to sell the inventory themselves, further down the road. (If the publisher already has an ad sales team that can sell into this, however, they can continue.)

To promote their video content, publishers can also opt to use Flipboard’s recently launched Storyboards feature which, instead of being algorithmic feeds are static collections of content they want to highlight.

“Today’s launch builds on the publisher ecosystem we’ve been fostering for almost a decade, our foundational vision for content discovery, as well as our recent work around Flipboard TV,” said Mike McCue, Flipboard’s co-founder and CEO, about the launch. “The new native video player opens up new opportunities for new user experiences, partnerships and monetization. I expect us to partner with more creators and independent producers in the near future.”

The new features are rolling out today within the Flipboard app in the U.S.