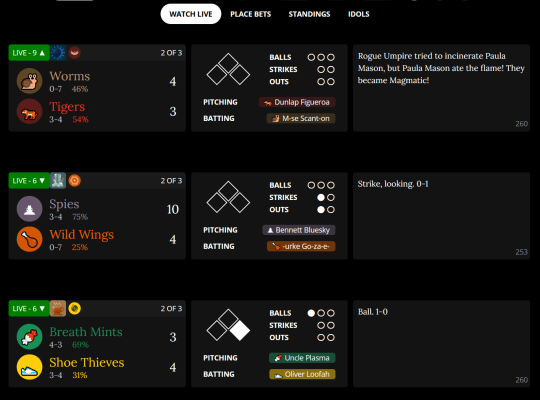 In the absence of a real baseball league, it is perhaps not surprising that a simulated one should grow popular during the troubled year 2020. But even so, the absurdist horror and minimalist aesthetic of Blaseball seem an unlikely success. The text-based fantasy fantasy league has attracted hundreds of thousands of players and now $3.4 million in funding to build up the game and go mobile.

If you’re unfamiliar with Blaseball, feel free to go check it out now and sign up — it’s free. You’ll probably get a better idea of what the game is from 30 seconds of browsing than the next couple paragraphs.

For those of you who’d rather read, however, Blaseball is a web-based fictional baseball-esque league where players can bet in-game currency on the outcomes. But this is where things get weird. The teams aren’t the Mariners or the Mets but the Moist Talkers and the Worms; players have names like Chorby Soul and Peanutiel Duffy; their stats include things like allergies, pregame rituals, and an inventory of RPG-like items.

Likewise, games — told through simple text summaries of the action like you might see in the corner of a sports site — involve hits, balls, and stealing, but also incineration, shaming, and secret bases. “Weather” might involve spontaneous blood transfusions between players, or birds that interfere with play.

In short, it’s totally ridiculous, utterly unpredictable, and very funny. This totally unique concoction of fantasy leagues, baseball satire, and cosmic horror has accrued a dedicated yet routinely puzzled fanbase over its 19 week-long seasons. And like so many hits, this one came as something of a shock to its creators. 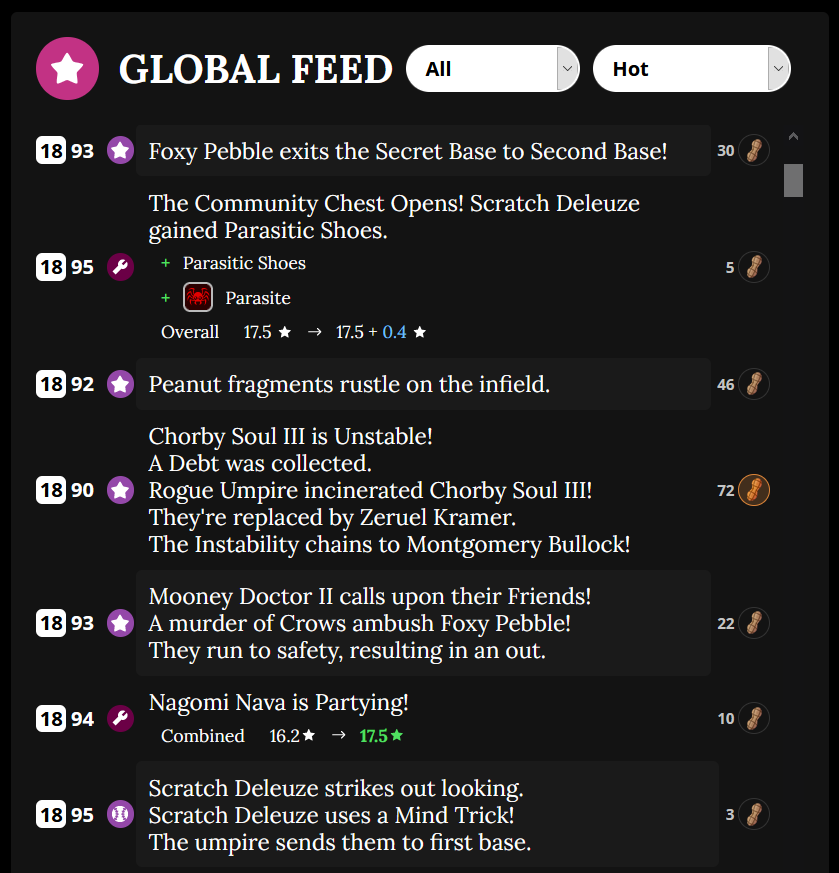 “We’re as surprised as you are,” said Sam Rosenthal, founder and CEO of The Game Band, which developed (and is developing) the game. “Blaseball was an experimental side project for the studio — we were in the middle of a pandemic, publishers were in a spending freeze, it was a scary time. We wanted to make a game that brings people together in this really isolating time.”

The idea for it came from banter at a real baseball game, where Rosenthal and a friend speculated about a league where the rules were “different and more chaotic.” Of course the rules of real-life baseball are continually being revised, but so far there haven’t been any resurrections of players incinerated by rogue umpires, free runs for home teams, or shrink rays.

While the resulting game-like product bears some resemblance to baseball, betting, and fantasy leagues, it’s much too weird and random to really be considered the same thing. That’s led to some friction as players who expect a more traditional experience lose coins on a game decided by, say, a bird pecking their team’s star hitter inside an enormous peanut shell, or a guaranteed home run because the batter ate magma. 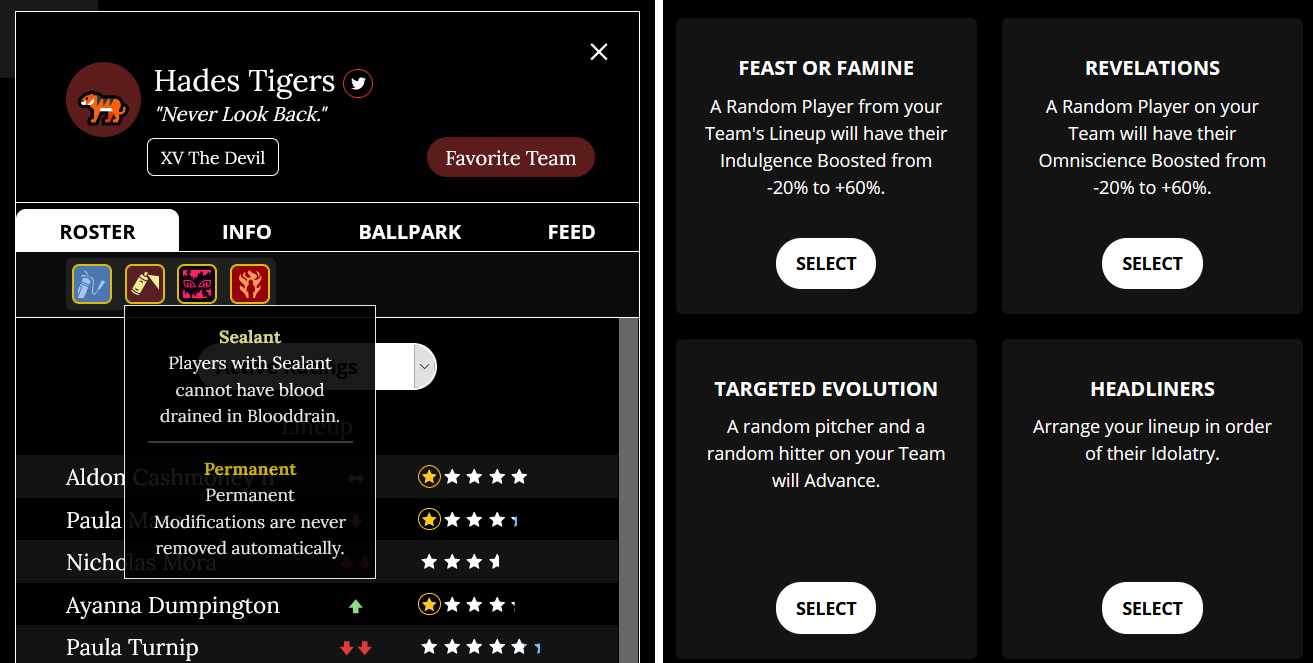 The Hades Tigers… so hot right now. The roster shows a team’s current and permanent attributes, while players can work together to create change by voting weekly.

“Sometimes we have to remind the fans that this is a horror game,” Rosenthal admitted. The gameplay, as players discover in time, consists more in cooperation and guiding the league itself than in precision oddsmaking. “This is not a game about individual success but collective success. The mechanics of the game reward organization, fans banding together with other fans of their team.”

Using those coins to buy votes to determine how the most-idolized players are treated at the end of a season, for instance, could have huge repercussions on the next season. Ultimately the players are really participating in a sort of long-term alternative-reality game rather than a zany baseball sim, as the ominous announcements and events drive home now and again.

Next to the outcome of a match and the news that a player was walked to second base, you might learn that “Reality flickered in the Feedback” or see disembodied dialogue about the league or disordered cosmos.

It can be disconcerting and one may rightly wonder whether the creators have a narrative or goal in mind, or whether they’re just winging it and being weird for weirdness’s sake. I guessed the latter, but Rosenthal set me straight. 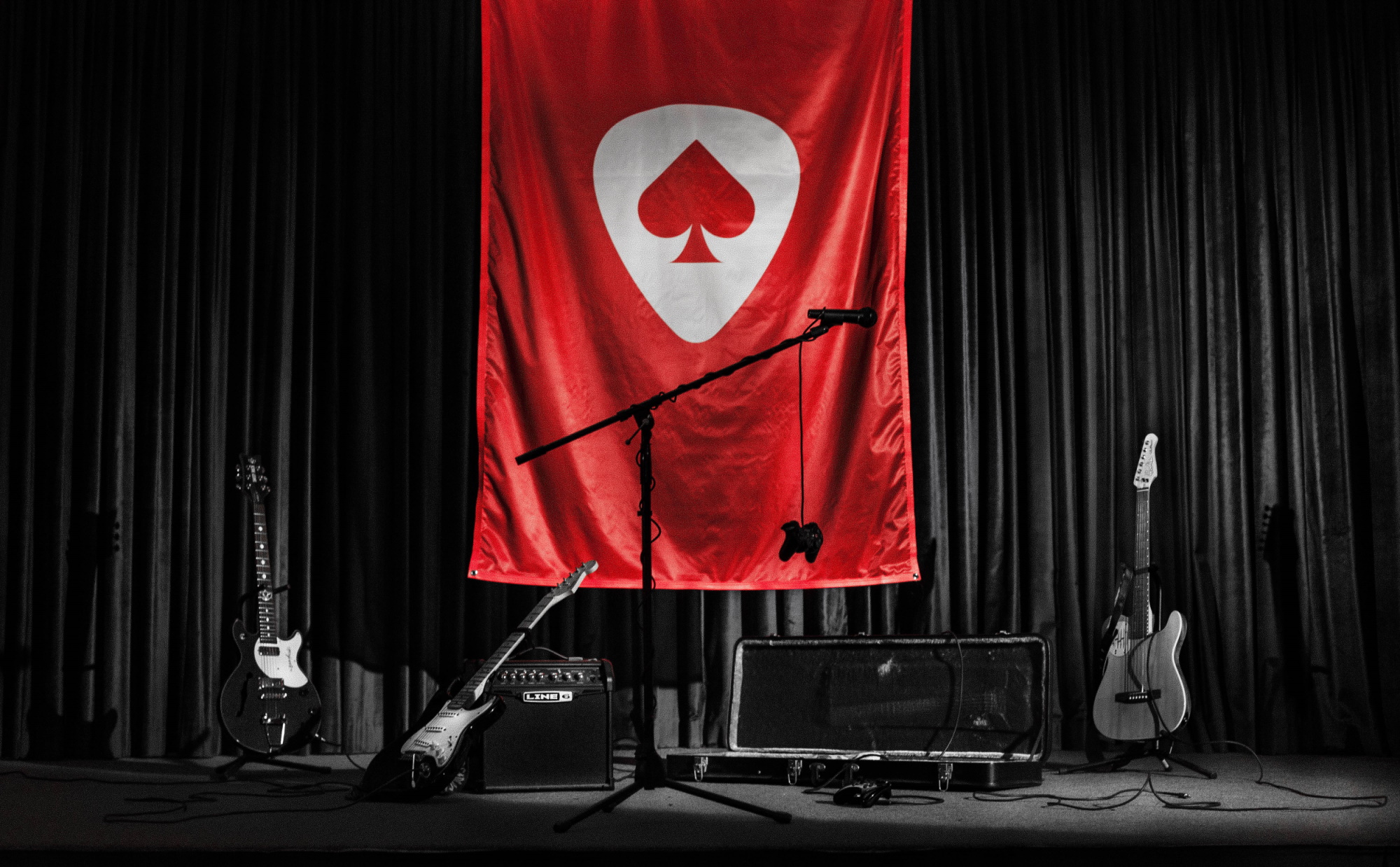 “It is going somewhere,” he assured me. “There are a lot of plans, we have a ton of lore written. We literally have a writers’ room every day, usually about 3-4 hours long. But we need to stay flexible because there’s two other creators: the simulation, since we don’t know what will happen in the games themselves, and the fans. There are things we don’t know they’ll latch onto, emergent narratives like the reincarnation of Jaylen Hotdogs. We’re always learning, and we give ourselves a lot of room to backtrack or change things quickly if needed.”

What was never clear even to the developers, however, was whether the game would live long enough to see those plans come to fruition. Blaseball, being a side project built during strange days, was never envisioned as a big money maker. For a small game developer to have a runaway success on their hands but little ability to monetize that success, the stresses of continuing development and support can overtake the benefits of popularity.

“Since we didn’t really set it up from the get go to be profitable, we were just sort of slowly losing money,” said Rosenthal. “Fortunately our community has been really supportive through Patreon and sponsorships. But ultimately we wanted to make the game better and sustainable, and we wanted to pay our team what they deserve.” 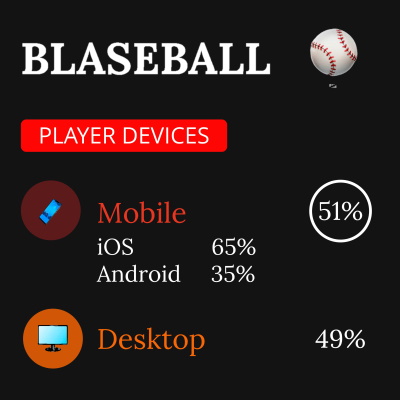 The $3M seed round keeps the lights on, to begin with, but also lets The Game Band staff up, so the writers don’t have to break up a meeting early because one of them is doubling as product support and the site is breaking. More importantly, however, the team plans to make a native mobile app. More than half of Blaseball’s players (that is, the real ones, not Baby Triumphant and Wyatt Mason IV) are on mobile and Rosenthal admitted the mobile experience is “not great.”

The company comes from a mobile development background, he noted, so they know what they’re doing, but saw the web as the easiest platform to deploy on during the pandemic. Now they want to get mobile up and running, since the live, constantly shifting nature of the game fits well with the kind of updates sports and fantasy aficionados tend to sign up for. Who wouldn’t want to know right away that their favorite team has entered Party Time, or that their idolized player found a new piece of armor, or that a new non-physical law has been ratified?

Rosenthal said they resisted seeking funding to begin with due to a desire for independence, but was enthused about their choice of investor, Makers Fund, saying they actually understand Blaseball and have been partners rather than parents when it comes to moving the operation towards making money.

“The know we can’t just copy monetization from another game and put it in Blaseball, that would ruin the experience right away. They have an amazing network of people in the games industry, and at the end of the day they’re not prescriptive,” he said.

(They also gamely did not object to a line in the press release by the fictional Commissioner asserting that “Blaseball has acquired Makers Fund,” which says a lot.)

“We’re very cognizant that there are ways that free games can monetize that are detrimental to the community,” he continued. “So it will always be free to play and it will never be pay to win. Like, the Crabs are never going to run away with it because they’re the richest team. When we think about monetization we think about how it can benefit the community as a whole, not individuals.”

In the meantime the league slouches on, morphing from week to week in a live dialogue between players and developers. Don’t expect it go get any less weird, because the creators know that constant disorientation is part of the game’s charm.

Amazingly, Rosenthal even managed to suggest that Blaseball was, in the parlance of game design tropes, the Dark Souls of baseball simulators — “it [Dark Souls] gives you so little, it asks you to interpret and put a thesis together, to go linger on forums and talk with others about it. We wanted to create that kind of experience, and see how people would interpret this sort of weird, unknowable entity.”

They certainly got the weird and unknowable part right. You can try Blaseball out for yourself here.