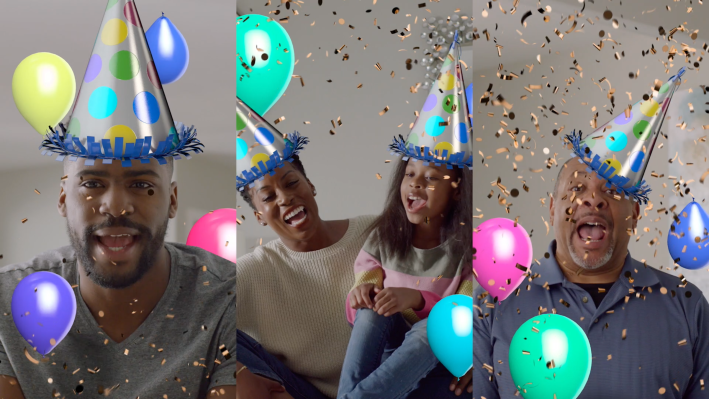 At today’s F8 developer conference, Facebook announced new capabilities for Spark AR, its flagship AR creation software. Since Spark AR was announced at F8 2017, more than 600,000 creators from 190 countries have published over 2 million AR effects on Facebook and Instagram, making it the largest mobile AR platform, according to Facebook. If you’ve ever posted a selfie on your Instagram story with an effect that gave you green hair, or let you control a dog’s facial expression by moving your own face, then you’ve used Spark AR.

Soon, these AR effects will be available for video calling on Messenger, Instagram, and Portal with the introduction of a Multipeer API. Creators can develop effects that bring call participants together by using a shared AR effect. As an example, Spark AR shared a promo video of a birthday party held over a video call, in which an AR party hat appears on each of the participants’ heads.

Creators can also develop games for users to play during their video calls. This already exists on Facebook video calls – think of the game where you compete to see who can catch the most flying AR hamburgers in their mouth in a minute. But when the ability to make new, lightweight games opens to developers, we’ll see some new games to challenge our friends with on video calls.

These video call effects and multipeer AR games will be bolstered by Spark’s platform exclusive multi-class segmentation capability. This lets developers augment multiple segments of a user’s body (like hair or skin) at once within a single effect.

Facebook also discussed its ongoing ambition to build AR glasses. Chris Barber, Director of Partnerships for Spark AR, said that this goal is still “years away” – but, Barber did tease some potential features for the innovative, wearable tech.

“Imagine being able to teleport to a friend’s sofa to watch a show together, or being able to share a photo of something awesome you see on a hike,” Barber said. Maybe this won’t sound so dystopian by the time the product launches, years down the road.

Last October, Spark AR launched the AR Partner Network, a program for the platform’s most advanced creators, and this year, Spark launched an AR curriculum through Facebook’s BluePrint Platform to help creators learn how to improve their AR effects. Applications for the Spark Partner Network will open again this summer. For now, creators and developers can apply to start building effects for video calling through the Spark AR Video Calling Beta.