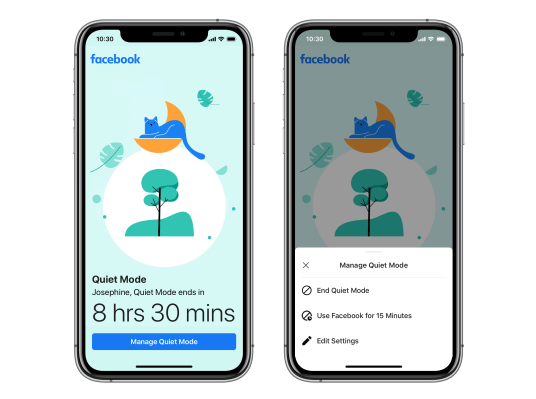 Facebook today is launching a new feature called “Quiet Mode” that will allow you to minimize distractions by muting the app’s push notifications for a time frame you specify. The company announced the change as an update on its COVID Newsroom post, describing it as a way for users to set boundaries around how they spend their time on Facebook as they adjust to new routines and to working from home during the COVID-19 pandemic.

According to Facebook, you can either turn on or off Quiet Mode as needed or you can schedule to it run automatically at designated times. For example, if you work from home from 9 AM to 5 PM, you could set Quiet Mode to automatically run during your workday to reduce your temptation to waste time in the app.

If you try to launch Facebook during Quiet Mode, the app will remind you that you’ve set this time aside with the goal of limiting your time in the app, the company explains.

The controls for Quiet Mode will be found in a new section on Facebook where you can view other data about your time spent on Facebook’s platform. Here, you’ll be able to browse charts that show you the time you’ve spent on Facebook on a daily basis, a comparison of your daytime versus nighttime use, and another chart that lets you see how many times you opened the Facebook app each day.

Facebook introduced its first “time spent” charts back in 2018, but their appearance has changed to better match the style of this new “Your Time on Facebook” section, rolling out today. Facebook has also now added more analysis, including new week-over-week trends, the time of day charges, and the chart displaying the number of visits.

In addition, this section will include an option to enable a weekly report that will let you know how you’re managing your time. It will also link to the Activity Log of your own interactions across Facebook, including your reactions, comments and posts. And it will link out to other features that were previously buried in the Settings, including your News Feed Preferences and Notification Settings. 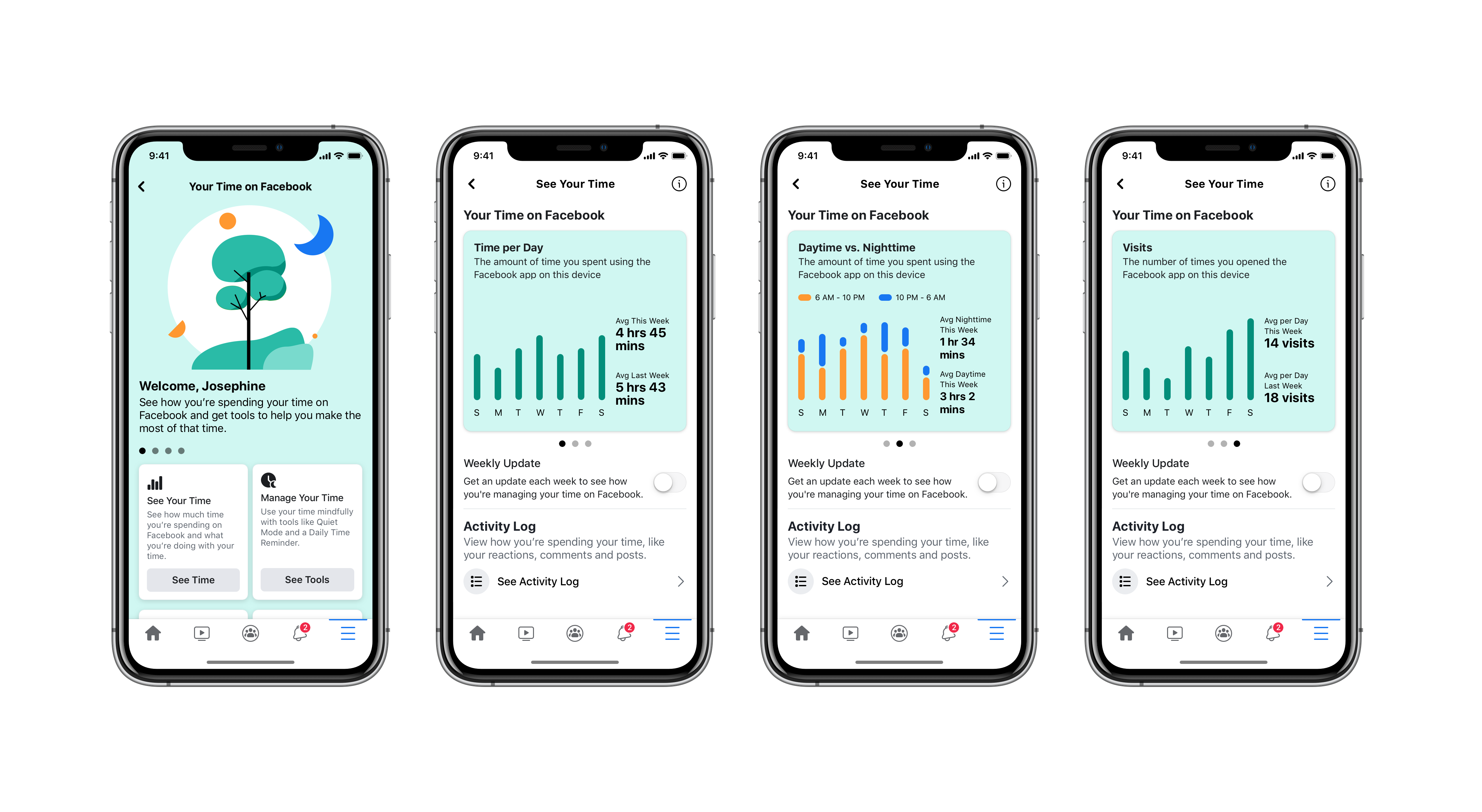 The former is where you designate which people you see first on your News Feed, which to Snooze, which to Unfollow and so on. The Notification Settings section, meanwhile, lets you turn on or off the push notifications and emails for specific updates from Facebook, like new comments, friend requests, tags, birthdays and more.

These aren’t new features, but they’ve been relocated here to make the new section more of a one-stop-shop for managing your time on Facebook.

Today’s changes are the latest in a series of efforts Facebook has made in recent years focused on users’ “digital well-being.”

The digital well-being movement pushes forward the idea that our smartphones and applications weren’t built with the mental health needs of their users in mind, but were rather designed to maximize the time we spend staring at screens. Users, having become aware of the addictiveness of our mobile devices, began to feel more negatively about screen time and their time-wasting apps.

Fearing backlash, tech companies — including Facebook, as well as the OS makers, Google and Apple — introduced more digital well-being features into their platforms. This includes the now built-in screen time controls that allow users to track and limit their time spent on phones and even the time spent in individual apps, like Facebook.

One iOS feature, in particular, may have posed a particular threat to Facebook: a new option introduced in iOS 12 that allowed users to more easily turn off app notifications right from the push notification itself. Apple even demoed how this could be used to silence Facebook’s notifications easily — an effort to redirect this growing negative user sentiment to specific apps on its iOS platform, rather than toward the platform that allowed apps to spam users with alerts in the first place.

Facebook’s response to this iOS feature, belatedly, is today’s launch of Quiet Mode. Instead of having its app notifications turned off entirely from the home screen of an iPhone, the option gives Facebook users more nuanced control. But it also means that Facebook retains permission to push its notifications during the hours Quiet Mode doesn’t run.

Facebook told me (via @alexvoica) that they’ve been testing it for a few months and will continue to test and iterate pic.twitter.com/7sPDuP4mrL

Facebook confirms Quiet Mode was in testing with a small percentage of Facebook users prior to today’s launch. It’s the same feature that reverse engineer Jane Manchun Wong had spotted in March, in fact.

The feature is now rolling out to more people globally on iOS and will continue to do so over the next month or so, Facebook says. The rollout on Android will begin with testing in May and a broader release in June.