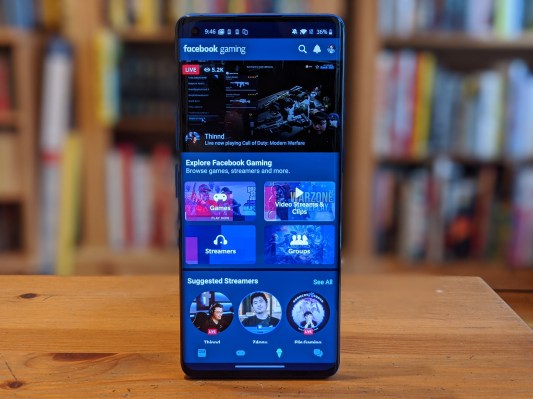 Facebook’s dedicated Gaming app is now live on Android, months before its planned June release. The social media giant pushed the app out two months prior to its scheduled unveiling amid a global pandemic that’s left people all over the world isolated at home, rapidly burning through entertainment options.

The New York Times announced the upcoming release in an exclusive over the weekend, noting that Facebook’s massive gaming investment has culminated in more 700 million of the sites’s 2.5 billion users actively engage with games through the platform monthly. The launch of a devoted app is a clear next step for content that has, until now, been the domain of the site’s Gaming tab.

Social engagement is the focus for the app (naturally), which will be getting an iOS version at some point in the near future (pending Apple approval). “It’s entertainment that’s not just a form of passive consumption but entertainment that is interactive and brings people together,” the app’s head Fidji Simo told the paper, later adding, “We’re seeing a big rise in gaming during quarantine.”

Twitch and YouTube are among the biggest competitors for the app’s gaming Go Live streaming feature. Facebook has already has a massive platform in its own Live offering, which is currently seeing high levels of use as isolated users seek some manner of human connection during the COVID-19 shutdown. With Go Live, users can share gaming streams directly to their Facebook page.

Live streaming is the highlighted feature upon launching the app, while a second tab offers game discovery both through your friends’ activities and a by category breakdown. A final tab sports a chat platform.

The app’s arrival comes after a year and a half of testing in various markets, including Latin America and Southeast Asia. Gaming is launching without ad support, though Facebook tells the Times that it plans to monetize by taking commission off of “stars” — donations viewers send to streamers.

It remains to be seen how the Twitch/YouTube method will translate for a platform traditionally more focused on casual gaming titles like Words With Friends. Not all of the service’s attempts to spin off features as devoted apps have been successful, but the rushed timing could give the service an extra boost, as users seek out new forms of content and socializing during a global shutdown.