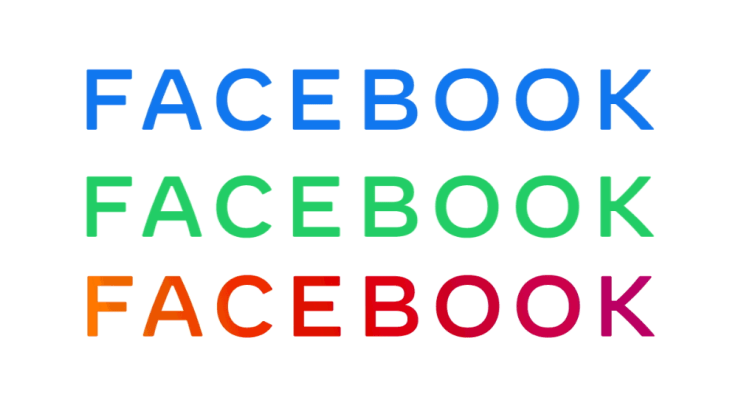 Facebook wants more people to know it owns Instagram, WhatsApp, and Oculus while still maintaining a distinct identity for its main app. So today Facebook launched a new capitalization and typography format for its company name, using all capital letters and a shifting color scheme that highlights Instagram’s purple gradient and WhatsApp’s green tint.

“Over the coming weeks, we will start using the new brand within our products and marketing materials, including a new company website” Facebook’s CMO Antonio Lucio writes. For example, the bolder “from FACEBOOK” branding will appear at the bottom of the Instagram login screen and settings menu. Facebook previously used a blue or white lowercase “f” as a logo.

Zuckerberg double-down on that sentiment during this month’s earnings call as a response to questions about anti-trust investigations against the company that could seek to force a spin off of its acquisitions. Zuckerberg noted that it wa Facebook’s resources in areas like anti-spam, internationalization, and ads that helped turn Instagram from a sub-50 million user product to a billion-plus one today.

Some see Facebook as preemptively mounting defense against anti-trust action. Beyond rebranding, it’s working on making Facebook Messenger, WhatsApp, and Instagram Direct a unified interoperable and encrypted messaging system where users can chat across the apps. Building them all on a centralized infrastructure could make Facebook tougher to break up.

Yet from another perspective, the rebranding efforts feel ham-handed and egotistical. Facebook likely benefits from the fact that most people don’t actually know it owns Instagram and WhatsApp. A recent Pew study found only 29% of Americans correctly the named the two as companies owned by Facebook.

Given Facebook’s rash of data security, developer platform, election interference, and ongoing privacy scandals, it’s probably better off if people think they can escape the toxicity by using Instagram. The acquisitions effectively acted as a brand lifeboat for Facebook.

Now it seems Facebook is happy to burn down some of the credibility of its younger apps if it builds up the central company. Autonomy at the acquired companies has seemed to wane since Facebook installed loyal lieutenants like Adam Mosseri and Will Cathcart to run Instagram and WhatsApp.

The big problem for Facebook, beyond government regulation? If talent see Facebook as choking the potential of its subsidiaries, top workers might be hesistant to join or stay at the family of social networks.