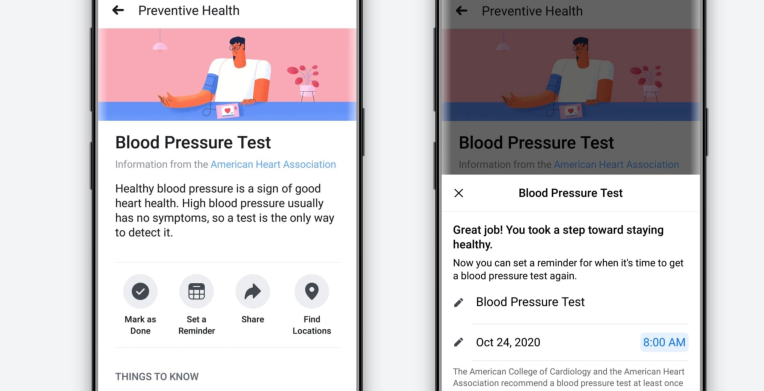 Nearly a year and a half after the Cambridge Analytica scandal reportedly scuttled Facebook’s fledgling attempts to enter the healthcare market, the social media giant is launching a tool called “Preventive Health” to prompt its users to get regular checkups and connect them to service providers.

The architect of the new service is Dr. Freddy Abnousi, the head of the company’s healthcare research, who was previously linked to an earlier skunkworks initiative that would collect anonymized hospital data and use a technique called “hashing” to match the data to individuals that exist in both data sets — for research, according to CNBC reporting.

Working with the American Cancer Society; the American College of Cardiology; the American Heart Association; and the Centers for Disease Control and Prevention, Facebook is developing a series of digital prompts that will encourage users to get a standard battery of tests that’s important to ensure health for populations of a certain age.

The company’s initial focus is on the top two leading causes of death in the U.S.: heart disease and cancer — along with the flu, which affects millions of Americans each year.

“Heart disease is the number one killer of men and women around the world and in many cases it is 100% preventable. By incorporating prevention reminders into platforms people are accessing every day, we’re giving people the tools they need to be proactive about their heart health,” said Dr. Richard Kovacs, the president of the American College of Cardiology, in a statement.

Users who want to access Facebook’s Preventive Health tools can search in the company’s mobile app to find which checkups are recommended by the company’s partner organizations based on the age and gender of a user.

The tool allows Facebookers to mark when the tests are completed, set reminders to schedule future tests and tell people in their social network about the tool.

Facebook will even direct users to resources on where to have the tests. One thing that the company will not do, Facebook assures potential users, is collect the results of any test.

“Health is particularly personal, so we took privacy and safety into account from the beginning. For example, Preventive Health allows you to set reminders for your future checkups and mark them as done, but it doesn’t provide us, or the health organizations we’re working with, access to your actual test results,” the company wrote in a statement. “Personal information about your activity in Preventive Health is not shared with third parties, such as health organizations or insurance companies, so it can’t be used for purposes like insurance eligibility.”

The company said that people can also use the new health tool to find locations that administer flu shots.

“Flu vaccines can have wide-ranging benefits beyond just preventing the disease, such as reducing the risk of hospitalization, preventing serious medical events for some people with chronic diseases, and protecting women during and after pregnancy,” said Dr. Nancy Messonnier, Director, National Center for Immunization and Respiratory Diseases, CDC, in a statement. “New tools like this will empower users with instant access to information and resources they need to become a flu fighter in their own communities.”