Facebook announced this morning it will begin testing a new experience for discovering businesses in its News Feed in the U.S. When live, users to tap on topics they’re interested in underneath posts and ads in their News Feed in order to explore related content from businesses. The change comes at a time when Facebook has been arguing how Apple’s App Tracking Transparency update will impact its small business customers — a claim many have dismissed as misleading, but nevertheless led some mom and pop shops to express concern about the impacts to their ad targeting capabilities, as a result. This new test is an example of how easily Facebook can tweak its News Feed to build out more data on its users, if needed.

The company suggests users may see the change under posts and ads from businesses selling beauty products, fitness or clothing, among other things.

The idea here is that Facebook would direct users to related businesses through a News Feed feature, when they take a specific action to discover related content. This, in turn, could help Facebook create a new set of data on its users, in terms of which users clicked to see more, and what sort of businesses they engaged with, among other things. Over time, it could turn this feature into an ad unit, if desired, where businesses could pay for higher placement.

“People already discover businesses while scrolling through News Feed, and this will make it easier to discover and consider new businesses they might not have found on their own,” the company noted in a brief announcement.

Facebook didn’t detail its further plans with the test, but said as it learned from how users interacted with the feature, it will expand the experience to more people and businesses. 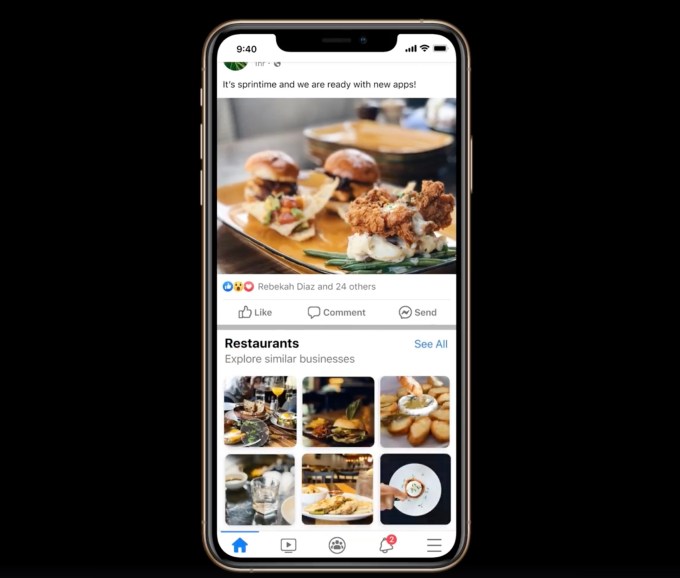 Along with news of the test, Facebook said it will roll out more tools for business owners this month, including the ability to create, publish and schedule Stories to both Facebook and Instagram; make changes and edits to Scheduled Posts; and soon, create and manage Facebook Photos and Albums from Facebook’s Business Suite. It will also soon add the ability to create and save Facebook and Instagram posts as drafts from the Business Suite mobile app.

Facebook earlier this year announced a new Facebook Page experience that gave businesses the ability to engage on the social network with their business profile for things like posting, commenting and liking, and access to their own, dedicated News Feed. And it had removed the Like button in favor of focusing on Followers.

It is not a coincidence that Facebook is touting its tools for small businesses at a time when there’s concern — much of it loudly shouted by Facebook itself — that its platform could be less useful to small business owners in the near future, when ad targeting capabilities becomes less precise as users vote ‘no’ when Facebook’s iOS app asks if it can track them.