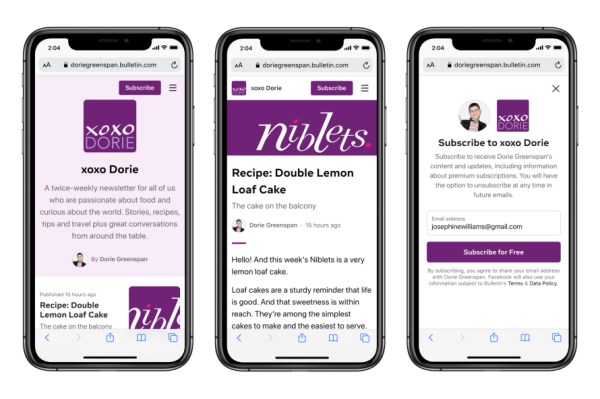 Late last month, Facebook announced Bulletin, its newsletter platform. Unlike Substack, Medium and other competitors, Bulletin hand-picks its writers to curate a more controlled platform, with stars ranging from Mitch Albom, whose book “Tuesdays with Morrie” continues to break hearts in seventh grade English classes, to Queer Eye’s Tan France, who taught a generation of young people how to perfect their French tuck. Today, Facebook announced its first new wave of newsletter writers after its initial beta launch.

“We respect the work of writers and want to be clear that anyone who partners with us will have complete editorial independence,” Facebook wrote in a blog post after Bulletin’s launch. And, after reading comedian Greg Mania’s Bulletin-hosted essay about hemorrhoids, this statement feels accurate.

But when we talk about “editorial independence,” we’re not really talking about the ability to publish an essay called “My Date With the Rectal Surgeon.” With this statement, the company seemed to be nodding to the controversial “hands-off” approach that Substack has taken with its platform. Medium has dealt with a cultural reckoning of its own, too — the platform used to host in-house publications like GEN and Elemental, which were written and edited by trained journalists, but a pivot in the company’s vision effectively shut down editorial operations. So, Facebook’s investment in platforming (a select few) journalists and writers comes in direct opposition with the emphasis from Substack and Medium on user-generated content.

Facebook isn’t the only major social media platform that’s interested in newsletters — in January, Twitter acquired the newsletter platform Revue, but aside from some quiet updates, it seems like Twitter’s attention is focused elsewhere for now.