Facebook has branded a legal order to globally block a number of Brazilian accounts linked to the spread of political disinformation targeting the country’s 2018 election as “extreme”, claiming it poses a threat to freedom of expression outside the country.

The tech giant is simultaneously complying with the block order — beginning Saturday after it was fined by a Supreme Court judge for non-compliance — citing the risk of criminal liability for a local employee were it not to do so.

However it is appealing to the Supreme Court to try to overturn the order.

A spokesperson for the tech giant sent us this statement on the matter:

Facebook complied with the order of blocking these accounts in Brazil by restricting the ability for the target Pages and Profiles to be seen from IP locations in Brazil. People from IP locations in Brazil were not capable of seeing these Pages and Profiles even if the targets had changed their IP location. This new legal order is extreme, posing a threat to freedom of expression outside of Brazil’s jurisdiction and conflicting with laws and jurisdictions worldwide. Given the threat of criminal liability to a local employee, at this point we see no other alternative than complying with the decision by blocking the accounts globally, while we appeal to the Supreme Court.

On Friday a judge ordered Facebook to pay a 1.92 million reais (~$367k) fine for non compliance, per Reuters, which says the company had been facing further daily fines of 100,000 reais (~$19k) had it not applied a global block.

Before the fine was announced Facebook had said it would appeal the global block order, adding that while it respects the laws of countries where it operates “Brazilian law recognizes the limits of its jurisdiction”.

Reuters reports that the accounts in question were controlled by supporters of the Brazilian president, Jair Bolsonaro, and had been implicated in the spread of political disinformation during the country’s 2018 election with the aim of boosting support for the right wing populist.

Last month the news agency reported Facebook had suspended a network of social media accounts used to spread divisive political messages online which the company had linked to employees of Bolsonaro and two of his sons.

In a blog post at the time, Facebook’s head of security policy, Nathaniel Gleicher, wrote: “Although the people behind this activity attempted to conceal their identities and coordination, our investigation found links to individuals associated with the Social Liberal Party and some of the employees of the offices of Anderson Moraes, Alana Passos, Eduardo Bolsonaro, Flavio Bolsonaro and Jair Bolsonaro.”

The political disops effort had spent around $1,500 on Facebook ads, paid for in Brazilian reais, per its account of the investigation.

Facebook said it had identified a network of “clusters” of “connected activity”, with those involved using duplicate and fake accounts to “evade enforcement, create fictitious personas posing as reporters, post content, and manage Pages masquerading as news outlets”. 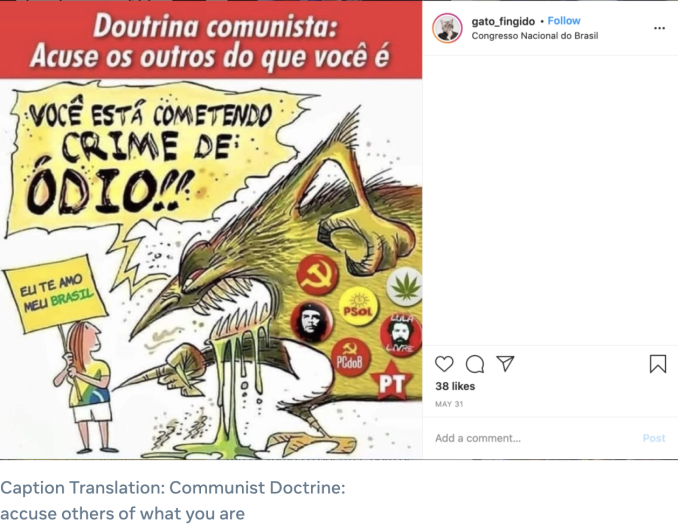 The network posted about “local news and events including domestic politics and elections, political memes, criticism of the political opposition, media organizations and journalists”; and, more recently, about the coronavirus pandemic, it added.

In May a judge in Brazil had ordered Facebook to a block a number of accounts belonging to Bolsonaro supporters who had been implicated in the election meddling. But Facebook only applied the block in Brazil — hence the court order for a global block.

While the tech giant was willing to remove access to the inauthentic content locally, after it had identified a laundry list of policy contraventions, it’s taking a ‘speech’ stance over purging the fake content and associated accounts internationally — arguing such an order risks overreach that could damage freedom of expression online.

The unstated implication is authoritarian states or less progressive regimes could seek to use similar orders to force platforms to apply national laws which prohibit content that’s legal and freely available elsewhere to force it to be taken down in another jurisdiction.

That said, it’s not entirely clear in this specific case why Facebook would not simply bring down its own banhammer on accounts that it has found to have so flagrantly violated its own policies on coordinated authentic behavior. But the company has at times treated political ‘speech’ as somehow exempt from its usual content standards — leading to operating policies that tie themselves in contradictory nots.

Its blog post further notes that some of the content posted by the Brazilian election interference operation had previously been taken down for violating its Community Standards, including hate speech.

The case doesn’t just affect Facebook. In May, Twitter was also ordered to block a number of accounts linked to the probe into political disops. It’s not clear what action Twitter is taking.