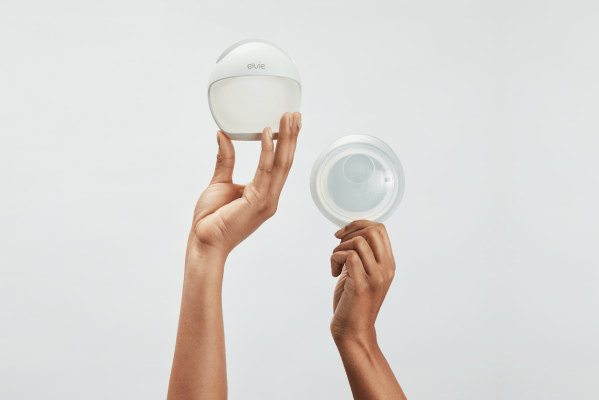 The Elvie Curve is described as “a wearable, silicone breast pump that allows for gentle hands-free expression when feeding or pumping from the other breast — or to express full breasts” — suggesting the UK-based startup intends for it to supplement the more expensive (and electronic) Elvie Pump.

The Elvie Curve is priced at RRP £49.99 vs around £250 for the Pump. The Pump is also slightly more capacious, holding up to 5 oz of milk compared to up to 4 oz for the Curve. The Curve is similarly designed to sit discreetly inside a bra.

As the Curve uses natural suction there’s no batteries (nor connectivity) involved. But Elvie says a valve lets the user control the suction strength — for a comfortable, low effort experience.

The startup has launched another new (non-connected) device today, called the Elvie Catch (RRP £29.99). This consists of a set of two slip-proof milk collection cups to prevent leaks, also designed to fit neatly inside a bra.

Elvie says the cups can be used “during feeding, pumping or on the go”.

“Unlike many other breast shells and nipple pads, Elvie Catch sits securely in a bra to prevent leaks and is reusable, collecting up to 1 oz of breastmilk per cup so nothing goes to waste,” it adds in a press release.

Last year the London-based startup raised a $42M Series B funding round, led by IPGL, which it said would be used to support the release of four additional women’s health products. (The company’s debut product was a connected pelvic floor exerciser, which it continues to sell as the Elvie Trainer.)

Commenting on its freshly expanded portfolio in a statement, CEO and co-founder, Tania Boler, said: “Elvie Curve and Elvie Catch mark the next steps in Elvie’s mission to modernise breastfeeding and pumping products so they fit into the lives of real, modern-day mums.

“We launched the silent, wireless and wearable Elvie Pump two years ago to make pumping a hands-free experience that empowers mums to pump on their own terms. But we know that the challenges of breastfeeding go beyond pumping.

“Breast milk is liquid gold, so these products are designed to make the most of every last drop – as well as fitting seamlessly (and discreetly) into the lives of mums, like all Elvie products!”

Both new products are slated as available to buy from today in the UK and the US via Elvie’s website.