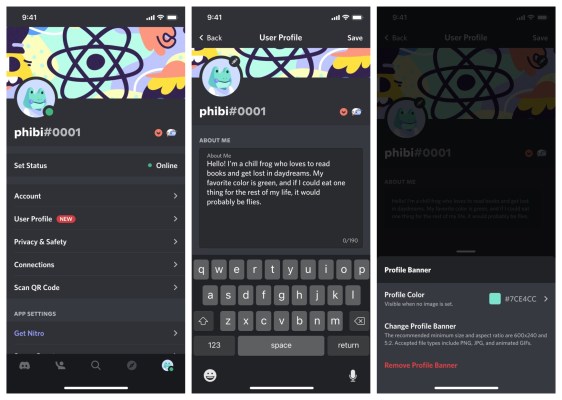 For mobile users, Discord is adding one new feature that you’d find on a more traditional social app. The company rolled out an option for users to customize their profiles across its iOS and Android apps Tuesday, following the feature’s release on the desktop version of Discord in late June.

The new option lives in Discord’s user settings menu under “user profile.” There, you can describe what you’re all about in 190 characters or less, including links and emojis. You can also select a custom profile color if the new default profile color that Discord assigned you isn’t vibing with your whole thing. If you don’t see the option yet, check back as the feature rolls out widely.

With the addition of custom profiles, the company also offered premium Nitro subscribers the option to choose an image or an animated GIF as a profile banner. The options have been out in the wild for desktop for a bit now, but the additional customization features will now give anyone who mostly uses Discord on iOS or Android a way to spice things up a bit.

The feature addition is small, but it’s a step toward the chat app becoming a touch more like more profile-centric social networks. Discord’s chat rooms, known as servers, have long been the platform’s sole focus, but the company has introduced a flurry of quality of life features in recent months.

Discord rolled out threaded, auto-archiving conversations and Clubhouse-like audio event spaces earlier this year, and also picked up a company called Sentropy that makes AI-powered platform moderation software. The app is already a killer service for community-driven voice and text chat, and the recent additions should help the app attract more users well beyond its humble gaming roots.